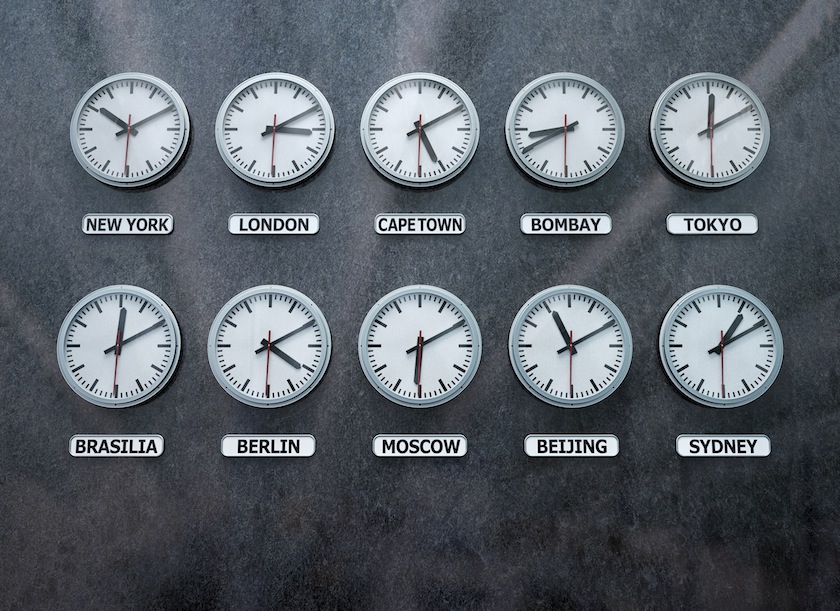 Time of the world
Photograph by Oliver Cleve—Getty Images

“In an ideal world, we’d all be in the same building,” says Josiah Humphrey, co-CEO of Appster. “We spent a long time pondering how to make it seem, as much as possible, as if we were.”

Humphrey and his co-CEO Mark McDonald started the app-development company with $3,000 in 2011 (when they were 20 and 19 years old, respectively). Appster now has 215 employees spread across three time zones — Humphrey’s native Australia, San Francisco, and Gurgaon, India, about an hour outside of Delhi—with projected revenues this year of about $20 million.

Collaboration among remote employees is always tricky, but it’s especially tough when a company is growing fast in places that are far apart. “You almost have to over-communicate,” says Humphrey. “One of the problems is that, when people don’t see other people working, they start to make negative assumptions. They start thinking, ‘What is that other team doing? Probably not much.’”

To avoid that kind of friction, Appster uses collaborative technology in four ways. First, the company started holding virtual meetings Humphrey dubbed “daily standups.” In the brief group video calls, via Google Hangout, each farflung team “gets a chance every day to tell three things: What they did yesterday, what they’re doing today, and what are the impediments to what they’re working on, if any,” Humphrey says.

“That last part is especially important,” he adds. “If there’s a hold-up somewhere, what’s causing it?” Often these sessions last just five minutes, but “it really helps.”

Team leaders keep track of each individual’s goals and performance, and give feedback in real time, by way of a tool with the whimsical name 7Geese. “When people are so far away from each other, you have to use collaborative technology to the utmost,” Humphrey says. “We also want to avoid hierarchy and be as transparent as we possibly can.”

For that, Appster uses a collaborative platform called 15five, which lets employees contact Humphrey and McDonald directly and say anything that’s on their minds. The co-CEOs reply and pose questions of their own to anyone who wants to answer. “We ask things like, ‘If you were CEO, how would you improve the company?’” says Humphrey. “Or, ‘What’s one stupid thing we are doing, and how do you think we should fix it?’”

That’s more candor than most managers might want to encourage, but giving people a chance to have their gripes heard seems to go a long way toward making Appster’s employees more content than the workforce at other tech companies. On employee-rating site Glassdoor.com, for instance, Appster has an almost-perfect 4.9 stars (out of a possible 5), versus 3 for Amazon.

To keep disgruntlement to a minimum, it also helps to hire people who know what they’re getting into. Appster looks for candidates who understand ahead of time that working for an enterprise that operates in several time zones will probably be inconvenient every now and then.

“We try very hard to accommodate the different times. For example, we schedule the daily standup at 7:30 p.m. in San Francisco, when it’s 8:30 in the morning the next day in India and almost lunchtime in Australia. But yes, once in a while, you are going to have to be on the phone at midnight or at 3 a.m.,” says Humphrey. “When you’re interviewing candidates for a global team, you have to make sure that they’re okay with that.”

Appster’s staffers will soon have to take a fourth time zone into account. The company expects to open an office in London early next year.