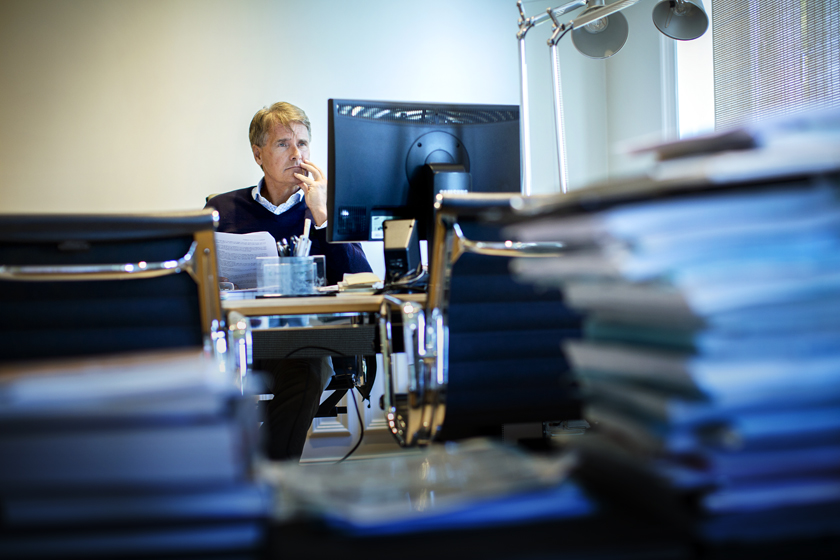 Swedish hedge fund manager Christer Gardell is, arguably, the Carl Icahn of Europe. Gardell’s firm, Cevian Capital, is one of the world’s largest activist investors, with roughly $15 billion in assets; it’s also one of Europe’s most active agitators for corporate change, having targeted 15 companies since 2010, according to J.P. Morgan (JPM).

But while Gardell counts Icahn as both friend and shareholder, his style is decidedly more gentlemanly. Gardell has never written a sharply worded open letter to a company’s management (a signature tactic of American activists), nor engaged in a proxy battle. Being nice hasn’t dulled his impact. Just the announcement that Cevian is an investor can boost a company’s shares: Swiss industrial robotics company ABB (ABB) surged nearly 4% in June after disclosing that Cevian had taken a stake; Swedish automaker Volvo, which Cevian has owned for nearly a decade, has returned almost 8% in the six months since the fund became its largest shareholder by invested capital. (Cevian, which has offices in Stockholm, Zurich, and London, declines to disclose its returns but says its funds have significantly outperformed the MSCI Europe index and benchmark hedge fund indexes since their inception.)

Shareholder activism is much rarer in Europe than in the U.S.—North American activist hedge funds manage $107 billion, more than three times as much as their European counterparts, according to Preqin. But more investors are following Gardell’s lead: In the first half of 2015, activists targeted 31 companies in Europe, more than they targeted in all of last year, according to Activist Insight. With growth accelerating in Europe after a prolonged recession, more investors are urging companies to become more efficient and to unlock value through mergers and spin-offs.

Fortune caught up with Gardell while he was playing in a championship tennis tournament for his age category (he’s 54) in the Swedish coastal town of Båstad. Between matches, he told us where he’s investing these days and why European activists are more prevalent than Americans realize. Edited excerpts of the interview follow.

What do you look for in the companies you invest in?

The strategy is to find good companies that are out of favor that we can buy cheap or that are underperforming their potential, such as Volvo. We bought in when they were making 4% EBIT margins, when they should be making 10%. A partner at Cevian recently joined Volvo’s board, and there was also a change of management. Everyone is fully committed to get to that 10% level, and Volvo is rapidly moving in that direction.

We only do [activist investing]. We have a very concentrated portfolio of 14 positions, and we sit on the board of 10 of them. We are looking to at least double our investment value in a three-year time period. And in the worst-case scenario we shouldn’t lose more than 20% of our capital. We will not invest in risky industries where the outcomes can be significantly worse, like technology, biotech­nology, and pharmaceuticals. So we’re in mostly service ­companies, industrial companies, and very specific places in the financial ­services industry.

What tools or strategy do you use to effect change?

We typically prefer to be the largest shareholder. In Europe, shareholders have stronger rights than in the U.S., and it’s easier to put your candidates in a board seat, especially if you own a significant amount of stock. We don’t have a hostile approach; we have a constructive approach. We don’t start a relationship with a lecture. You don’t want proxy fights or anything like that. We back up our ideas with solid arguments and solid facts.

Traditionally in Northern Europe, the largest shareholder is entitled to a board seat if they intend to be a long-term investor. For example at [industrial conglomerate] ThyssenKrupp and [construction com­pany] Bilfinger in Ger­many, we’ve been welcomed by the board. But to fundamentally change and improve a company, you need to be there for a while and take responsibility: Our average holding period is four to five years. If you’re a short-term play-in-and-play-out shareholder, you will probably not be able to enjoy the benefit of this approach.

How have Europe’s economic challenges affected your investing?

The European market is not as complicated as investors in the U.S. think it is. Obviously if you go further down in the Mediterranean, it gets a little bit trickier. Our core markets are Scandinavia, Germany, and the U.K.: The corporate governance environment is not as attractive elsewhere.

There are definitely signs that the European economy is turning: Confidence is going up a bit, and there are clear signs of growth. On top of that, the M&A market in Europe, which is lagging the U.S. by about two years, is taking off. Part of our role as an activist is to suggest M&A ideas. We did that with Cookson, the British engineering company—after I took a board seat, it demerged into [chemical and industrial supplier] Alent and [ceramics and metal processor] Vesuvius, both of which we still own. Alent and another portfolio company, RSA Insurance, received takeover offers in July, which is quite amazing. With Alent, because we are the largest shareholder, with a 22% stake, the buyer approached us, and we are involved in structuring the deal. It’s still in process, but I think it looks pretty good.

Why is shareholder activism less common in Europe than in the U.S.?

Activism is not done through media campaigns in Europe. So I think the way the U.S. defines activism would severely underestimate activism in Europe. I don’t think Cevian shows up in the statistics even though we are one of the biggest activist funds in the world and do activism every day. And there are big family shareholders in Europe that take a very active role as well—the Wallenberg family in Sweden has very active positions—but it wouldn’t be registered as activism because they are very, very long-term: It’s not three to five years, but 30 to 50 years.

A version of this article appears in the September 1, 2015 issue of Fortune magazine with the headline “The leader of Europe’s activist invasion.”