From pregnant teen to serial entrepreneur 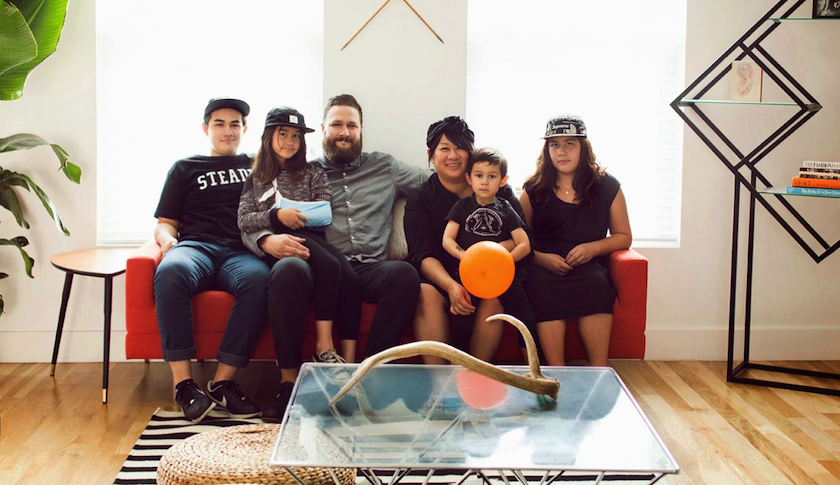 Tran Wills and her family (from left to right): Noah, Elliot, Josh, Tran, Hesh on her lap, and Quynh.
Photograph by Michele Crowe

When Tran Wills found herself pregnant and homeless in high school, she couldn’t have imagined that one day she would have two successful businesses, a loving husband and four great kids.

It started with her now-husband, Josh, working nights so she could finish high school. Together, they opened their first business, Fabric Lab, which sold local designer’s wares out of the basement of a hair salon in Denver, Colo. Friends and family thought they were crazy, but the rent was just $200 per month—cheaper than daycare.

Since then the 33-year-old has opened and closed several businesses and now owns the Super Ordinary art gallery and retail store as well as the Base Coat Nail Salon, which offers non-toxic, chemical-free services. Both businesses are also in Denver. And she’s not done yet: Wills and her business partner just inked the lease for a Base Coat in Los Angeles and hope to expand further in the coming years.

Her oldest son, Noah, is now 16 wants to pursue a music career while her youngest son, Hesh, 5, is often seen accompanying his mother to meetings while his sisters, Quynh, 12, and Elliot, 10, are in school. Josh recently left his position as the creative director of Factory Design Labs, working with clients such as North Face and Oakley, to open his own design studio, Consume & Create.

Wills spoke with Fortune about how she got her start and how she maintains both her family and her professional life. The conversation has been edited and condensed for clarity.

Fortune: Your parents kicked you out when you were 15. Could you imagine yourself here with two successful businesses?

Wills: When I was 15, I was just trying to survive. My parents kicked me out because I met a boy whom I loved. I house-hopped at my friends’ homes. Then, when I found out we were pregnant with Noah, Josh told his parents, and they took me in.

It was crazy to graduate with a 6-month-old—that’s for sure. Finally after Noah turned 1 we were ready to move out on our own, and then life started falling into place and here we are: married for 16 years and counting, and four kids later.

I always knew I wanted to open my own business, but I didn’t know I’d be here and giving people jobs. Base Coat has nine employees and Super Ordinary has two. That’s amazing to me.

What gave you the courage to start a business when you had young children and no financial resources?

I wanted to choose my own path. Josh was an artist, and I was making clothes at the time that we started the first store. I didn’t want to live with regret. When you’re a young mom, people look at you like you have no worth. We wanted to prove to everyone we weren’t going to be like that. I’m doing this for my kids. If it weren’t for them, I’d probably be working a job that I hate.

You often brought your children to business meetings. How did people react?

A lot of people were awesome about it, and some were questioning—like, are you a professional or not? But I said, “If you want to work with me, this is what it is.”

I don’t think I would have changed bringing the babies to the store. It showed me I could choose how I wanted to raise my kids and be a business owner.

After the boutique, you opened a cupcake and cereal bar that failed. What did you learn?

I got a business partner, and it didn’t work out. We had different ways. I think it’s really important to find the right people, people who are just as passionate as you are, who are willing to work just as hard and give up and sacrifice the same as you. That’s who you want to surround yourself with. Once I did, life was a lot easier.

But when the cupcake shop closed, it definitely humbled me. I realized not every idea I have is going to work, and it caused me so much stress. But I am glad I did it until this day. I’m still learning. Things have succeeded, and I’ve failed, and I’m okay with that. You have to accept failing because it’s going to happen. That’s what gives me even more courage. I have to face the people who maybe disappointed me or that I disappointed.

After that you opened Super Ordinary. How did that compare to opening Fabric Lab?

We opened Super Ordinary out of our house, which was a 1,500-square-foot warehouse. We wanted to fill a void for street art, the art that most people don’t want in a gallery. We had these moveable walls, and we would move them every second Saturday for a new opening. You couldn’t tell somebody was living behind there. The gallery was appointment-only, but because I was there, I would just open. We got families coming because people knew we lived there. We built this community.

But the openings started selling out, and we decided we needed to move. Now Super Ordinary is my big girl store. We had an architect come in. Before it was always DIY. We brought in two partners and did it the way we all envisioned that it would be done. We have beautifully curated one-of-a-kind pieces.

How have you financed the businesses?

It was our own money. Most of it came from Josh. His income went straight to the business. But it was still cheaper than daycare would have been.

With Super Ordinary, our two business partners put in the opening capital, and then we paid that off within a year. We have no loans; we don’t owe anybody any money. We do have an investor at Base Coat, but only because we couldn’t grow that business without taking one on.

The marriages of so many small business owners suffer. How have you and Josh kept your lives together?

Raising kids—it’s hard. It’s hard to manage being a good wife, a good mother, and being a good business partner. Some days I feel like I’m being torn three different ways.

Luckily, we love each other. We’ve fallen in love with each other many times over as we’ve grown up together. Everyone thinks we are this perfect marriage. But we fight things out. I think that’s important. We argue about how we raise our kids, how we raise our businesses. We appreciate that it’s because we’re both so passionate. We fight, and sometimes we say yes or no, but we always have to back it up with something.

How do you get it all done?

We divide and conquer, and we live day by day. Josh and I sit down each evening and say, “This kid needs to go here, and who can do it?” I don’t make appointments or schedule things more than a week in advance because invariably a kid gets sick, or something you couldn’t plan comes up. When I live day by day, I can be better prepared for when shit hits the fan. A kid will be sick, and something will go wrong at the store.

People think that being a business owner means you get to do what you want. But it’s the total opposite. If you’re not disciplined, you’re not going to get anything done, and it screws up everything.

Josh recently left his corporate job to start his own creative agency. How is it having two entrepreneurs in the family?

It’s stressful because there’s not a check coming in. When he had his job, he had a check, but he wasn’t happy there. He was supporting me for all these years so now I felt like it was his turn. It’s awesome; he’s super busy.

How do you think your kids see you?

I think they are super proud and super inspired. Noah for sure tell us he is. But we support him in the same way he supports us. He wants to be a music producer. Most parents are like, “But that won’t make any money,” and we’re like, “Well kid, there is a way to do it; you’ll figure it out.”

I think we’re being a good role model that shows you you don’t have to work a nine-to-five to be happy. Both of us are these creatives, and people assume you can’t make money, but you can. It is possible.

Any advice for other women trying to make it all work?

Always ask for help. Once I started doing that, my life got way easier. I was so used to doing it all by myself. I did it all without having a nanny or a house cleaner. Sometimes I thought about it, but then I thought, no, I can use the money to buy the kids this or put it into this business. I can clean my own house. But there are days when I wish I had help.

There will be sacrifices and days you want to quit. I probably want to quit every other week, but this allows me to see my kids.