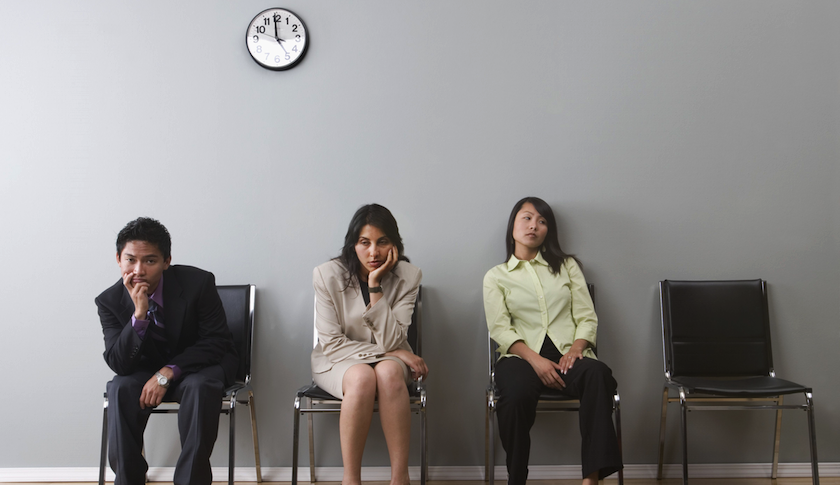 There’s one group, ironically, that hasn’t quite adjusted to the nation’s recent hiring surge. No, it’s not the Federal Reserve—it’s your human resources department. According to figures from career data tracker DHI Group, 27.8 days are now needed to fill an open position in the U.S. That’s the longest it’s ever taken, according to their records, which go back to January, 2001.

As unemployment continues to fall, job seekers are realizing they hold the cards when deciding to make a change. According to recruiting firm MRI Networks, 90% of recruiters now believe the leverage lies in the candidate’s corner when considering a new position. That’s quite a jump from 54% in the second half of 2011.

“The power has shifted from the company to the candidate,” says John Sullivan, a professor of management at San Francisco University. “They now have choices.”

With many HR departments slow to react to this changing reality, managers are left in a tough spot: How can you speed up your hiring process to ensure you grab the best candidate before your competition beats you to it?

Take on the hiring process yourself

One thing hasn’t changed in the new world of hiring: Referrals remain the fastest way to snag new employees. As a manager, you should have a rolodex of qualified candidates you’ve either been dying to work with or who you think would fit great within your organization. Building that network, even when you’re not hiring, will help attract quality talent.

Also talk to your human resources staff and offer to sift through their database of resumes and referrals since you know what you’re looking for. “Recruiters are busy,” says Career Builder’s Mary Delaney. “It’s good for managers to look in that database.”

That trove of qualified candidates will be pretty lean, however, if your website’s career portal makes job seekers jump through hoops just to apply. In fact, the simple step of forcing candidates to register reduces your pool by around half, says Delaney. Bring your HR leaders numbers showing that they’re missing out, and they won’t have any choice but to recognize the value in easing the application process.

“The biggest faux pas” in the selection process, says Allen Huffcutt, a psychology professor at Bradley University, “is when companies build in just round after round of interviews.”

Having different groups of managers come up with their own criteria for a great candidate jams up the process. “One interviewer will think it’s a good sense of humor,” says Huffcut. “One will not. Too many of those [qualities are] not actually related to the job.”

But standard questions such as, “What’s your biggest weakness?” or “Why do you think you would be a good fit?” don’t work either because candidates plan for those and have answers prepared. Instead, Huffcutt says you only need two types of questions in a job interview: hypothetical scenarios and behavioral descriptions.

Presenting hypothetical scenarios gives you insights into how a candidate will react to common (and sometimes uncommon) situations on the job. Some example questions from Huffcutt include:

Behavioral descriptions reveal how a candidate reacted to certain situations in the past. Huffcutt’s examples include:

Give each interviewee a score from one to five on each response. The candidate with the highest score wins the offer. “These questions have a track record for predicting performance,” says Huffcutt.

Most candidates are familiar with what feels like an endless interview process. It starts with a prescreening phone call with a human resources department. Then it goes to a face-to-face interview with a number of managers, and then if they sign off, one can expect even more chats up the food chain. While it’s one way to reduce the number of bad hires, “it also leads to a higher drop-off rate of candidates who become disengaged due to too many steps in the process,” says Delaney.

Sullivan likens it to when LeBron James left the Miami Heat in 2014: If Cleveland hadn’t immediately offered him the terms he wanted, James could have gone anywhere. Instead the Cavaliers locked him in immediately.

With the ubiquity of social media, most hiring managers can find out about a candidate before the person ever enters the door. Check in with your network and vet the hire before the two of you speak. If your contacts tell you the applicant fits the mold of a potential star, then dispense with the lengthy back-and-forth.

When it’s time to sign on the dotted line, Sullivan suggests a few strategies to make sure the candidate quickly agrees. Often the biggest hurdle comes down to pay. If that’s holding up the hire, then offer a salary review in the next three to six months. This will “alleviate some of their fear that they will be locked into a lower salary for long period of time,” he says.

You can also add a surprise perk that wasn’t discussed during the interview, like working from home on Fridays or having them pick their own job titles. This can sway a candidate who’s sitting on the fence. Then, as soon as they say yes, have them change their LinkedIn profile—it creates a public showing that they’ve made up their mind.