Lands’ End CEO on her post-Sears plan: “I am here to move the needle” 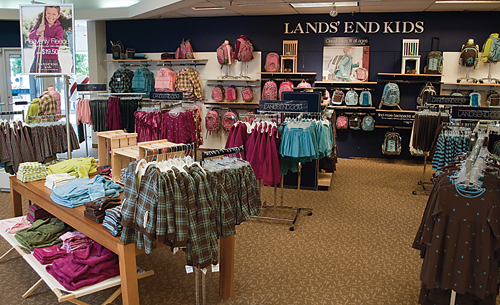 Lands’ End (LE) was long considered one of the crown jewels of the Sears Holdings (SHLD) empire, a beloved brand renowned for its sturdy, sensible apparel.

But the dusty label has been dragged down in recent years by Sears’ ongoing dramatic sales declines, chronic inability to get shoppers to come into its stores, and wholesale store closings, not to mention an integration since its 2002 acquisition by Sears that never really took hold.

Now that it is once again a stand-alone company, since Sears spun it off to its shareholders last year, it has the opportunity to reinvent itself. To do that, in February Lands’ End hired Dolce & Gabbana USA president Federica Marchionni as its new CEO, looking to tap her expertise in apparel and in building new international markets.

She has wasted little time getting down to work: she quickly made some high profile hires, will launch an overhauled web site and catalogue next month, along with a new branding campaign, and is already plotting some new product lines.

“What we’re trying to achieve, what I want to do really, is to create and elevate this iconic company into a meaningful, global lifestyle brand,” Marchionni tells Fortune in an exclusive interview.

Last month, to beef up her leadership team, she hired longtime Saks Fifth Avenue executive Joe Boitano as Lands’ End’s chief merchant and design officer, as well as J.Crew global sourcing head Scott Hyatt as its chief supply officer. That’s not to say Lands’ End is going upscale and that its wares will be at Milan Fashion Week any time soon. But it’s a clear indication that Marchionni thinks Lands’ End can get a lot more out of its existing business by better understanding the different U.S. markets and by being better prepared to expand its assortment.

But it will be about leveraging its market position much better.

Lands’ End is a leader in selling school uniforms- in fact, Marchionni herself was a customer before becoming CEO because of her 7 year-old son. But the company hasn’t done a good job of offering mothers buying those school uniforms something for themselves while Lands’ End has their attention, she said. And so Lands’ End will introduce a clothing line that is more fitted and more modern and more relevant for those customers.

The company is also known for its swimwear and is planning a bigger push in markets like Florida and California, which are full of potential but where it is much less penetrated than in northern markets with shorter swim seasons. (In March, Lands’ End launched an online tool to offer professional swimsuit fittings.) Lands’ End is planning to eventually add accessories like shoes and handbags, and will also expand its assortment of clothes in its signature category: outerwear.

The need to find new avenues of business is becoming crucial, as Sears’ problems continue to exacerbate Lands’ End’s own issues.

In the first quarter of 2015, Lands’ End revenue fell 9.4% to $299.4 million, hurt in part by a 15.5% decline in its retail sales, which overwhelmingly come from its 235 shops inside Sears stores. (It has another 14 stand-alone U.S. stores and a handful more overseas.) More worrisome, direct-to-consumer sales fell 8.2%, a disaster for a brand that gets 85% of its business online or via a catalogue. Those poor results followed two slow years for the company.

A telling fact about Lands’ End brand erosion: Sears bought the company for $1.9 billion in 2002. Nowadays, its market value is around $773 million.

While the specter of Sears still looms large over Lands’ End – in addition to its reliance on that retailer’s stores, Sears’ top shareholder, hedge fund manager Eddie Lampert, owns 47.8% of Lands’ End stock via his ESL Partners vehicle – Marchionni, 43, said her company is free to sell wholesale to retailers, too. But first, she wants to get Lands’ End’s house in better order to make carrying Lands’ End more enticing, and frankly, to give it more leverage in future negotiations with other stores that may carry the brand.

Her efforts will also include an international expansion beyond Japan, Britain and Germany, where it already operates, with a eye in particular on China as well as other European markets. Lands’ End currently gets 84% of sales from the U.S.

“I am sure that the company wants me to explore all that we can unlock- I am here to move the needle and unlock the full potential,” she says.