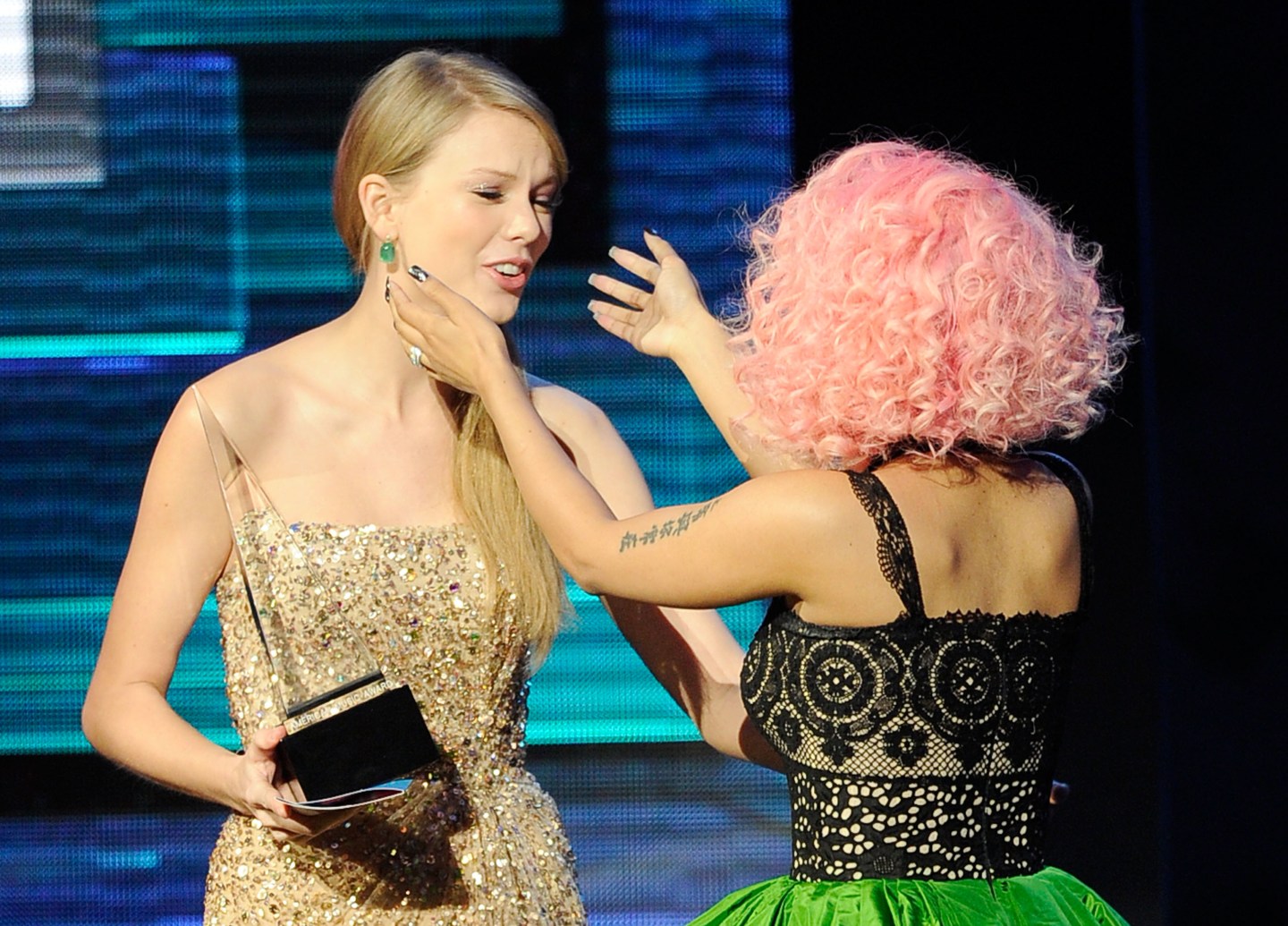 Oh, MTV Video Music Awards. Every time I try to write you off as an artifact of an earlier age, you serve up some new controversy that takes over the Internet for a day or two, reminding me that, believe it or not, you do still hold some cultural currency.

This time, the dust-up came over a snub: Rapper Nicki Minaj was not nominated for Video of the Year, despite having created two videos—“Anaconda” and “Feeling Myself”—that were considered strong contenders.

Minaj hopped on Twitter to air her frustration, saying that the awards celebrate videos featuring “very slim bodies” and that black women are rarely rewarded for the way they influence pop culture.

If your video celebrates women with very slim bodies, you will be nominated for vid of the year 😊😊😊😊😊😊😊😊😊😊😊😊😊

I'm not always confident. Just tired. Black women influence pop culture so much but are rarely rewarded for it. https://t.co/2xOvJzBXJX

Apparently this comment irked Taylor Swift, who felt “slim bodies” was a shot at her Video of the Year-nominated “Bad Blood,” which stars a pack of waifish supermodels. Swift responded to Minaj, saying, “It’s unlike you to pit women against each other. Maybe one of the men took your slot.”

@NICKIMINAJ I've done nothing but love & support you. It's unlike you to pit women against each other. Maybe one of the men took your slot..

At this point, it’s worth taking a closer look at the two stars’ arguments. Minaj’s stance—that she was overlooked because of her race and body type—is complicated by the presence of another massive pop persona: Beyoncé.

Beyoncé’s “7/11” was nominated for Video of the Year. And while no one would argue that Bey isn’t one of the biggest and brightest stars in the pop universe, she is still a black woman. What’s more, her physique is pretty far removed from the stick-thin runway models of Swift’s video.

On the other hand, Swift’s expression of female solidarity seems a little rich given the subject of her nominated video. “Bad Blood” is entirely based on a fight between two rival gangs of women. And then there’s the rumor that Swift wrote the song as a kiss-off to ex-friend and fellow pop star Katy Perry—an irony that Perry herself tweeted about yesterday.

So, where does that leave us?

The reality is that every award show stiffs deserving work. It’s hard to argue that Minaj’s “Anaconda” shouldn’t have been nominated. As the rapper herself noted, the surreal, jungle-themed video launched countless memes and broke Vevo’s record for the most views in 24 hours (although it was later dethroned by “Bad Blood.”) At last count, “Anaconda” had nearly 500 million views.

Getting lost in the back and forth is the strikingly unusual tone of “Anaconda.” Yes, the video is aggressively sexy, with plenty of barely-clad women. But it’s clear that Minaj is subverting the usual playful come-ons. Take the scene where she suggestively fondles a banana, then gleefully hacks the fruit to pieces. It’s hard to miss the subtext: You aren’t watching some male fantasy—Minaj is the one in charge here.

As she told GQ, “It’s always about the female taking back the power, and if you want to be flirty and funny that’s fine, but always keeping the power and the control in everything.”

Could that be the real reason MTV voters passed over Minaj? Perhaps it’s not her race or body that caused them to shy away, but her powerful, assertive take on female sexuality.

Of course, we’ll never know exactly why the rapper didn’t make the Video of the Year cut. And in a way, I’m glad she didn’t. It was refreshing to see these two famous young women have their say, speaking freely and directly to each other and to their fans. I’d argue that means much more than some tired Moonman statue.

Minaj and Swift are models for a new type of female pop artist. I hope we’ll see more like them, and many more messy, honest, imperfect attempts to communicate about how the music industry—as well as our culture—treats women and people of color.