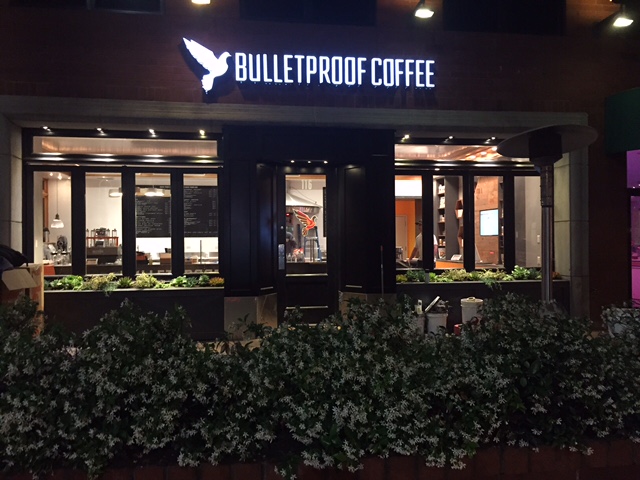 Dave Asprey puts butter in his coffee, and he’s already convinced thousands of people to do the same. He’s also convinced a venture capital firm to give him $9 million to help him build his buttered coffee empire.

For the uninitiated, Asprey is the founder and CEO of Bulletproof, a company best known for this unorthodox concoction. He’s since developed a full-fledged diet based on the same health principles behind the coffee, as well as other food products and supplements. And now it’s planning to open several coffee shop locations with its new cash infusion — despite not having opened its first one, located in Santa Monica, California, yet. The coffee shop is slated to open its doors in the coming weeks.

“All of us were really excited to see Dave turn Bulletproof into a real company,” Trinity Ventures partner Dan Scholnick told Fortune. Trinity wrote the $9 million check to Bulletproof.

And while Bulletproof was born in Silicon Valley and, on the outside, seems to fall in the same category as artisanal coffee companies like Blue Bottle, Four Barrel, and Philz (which have all raised venture capital money), Asprey believes it’s different. Bulletproof is about health and about “hacking” food to make our bodies function better.

The idea of Bulletproof came to Asprey because of his battle with weight loss — at one point he weighed around 300 pounds, affecting all aspects of his health and ability to function.

“My brain started to fail,” he said. “I decided that the most important thing I could do was to lose the weight.” And since traditional diets hadn’t been effective for him, Asprey decided to do his own research. Bulletproof’s combination of coffee, medium-chain triglyceride oil (a type of easily digestible fat), and butter derived from a buttery tea he was served during a hiking trip in Tibet. The resulting upshot in energy inspired Asprey to start putting butter in his coffee.

Of course, there are skeptics of Bulletproof coffee’s alleged magical powers. And despite Asprey’s claim that the coffee-and-butter combo is as tasty as adding cream and sugar, it won’t possibly win over every coffee drinker around.

Trinity Ventures’ involvement in Bulletproof is no coincidence. Asprey joined the venture capital firm in 2010 as an entrepreneur-in-residence, and already deep into his new “hacking” lifestyle, caught the attention of partner Dan Scholnick.

“I noticed Dave hanging around the office and eating things and doing things that seemed weird to me,” Scholnick told Fortune. He eventually asked Asprey to shed some light on his antics, and Scholnick and Trinity have been supporter of Bulletproof ever since. In fact, both Scholnick and fellow Trinity Ventures partner Gus Tai are joining the company’s board as part of the deal, and Scholnick is a devout drinker of the potion.

Though Bulletproof has already begun to expand its product line, which now includes energy bars, and its new Fat Water, a formulation of water and medium-chain triglyceride oil, Asprey sees the coffee shop locations as an important way to hook new customers on the high-calorie concoction. As he said, anybody can buy and brew coffee — any coffee — at home, but Asprey wants to offer a store experience to his customers.

“The retail stores are a way to help people get exposed to the lifestyle,” Scholnick said. “I think that bulletproof has the potential to be a national and a global movement and brand.”

And Trinity Ventures should know a thing or two about that — the firm has invested not only in coffee chain giant Starbucks, but also in other food and beverage brick-and-mortar companies like P.F. Chang’s and Jamba Juice.

“In a sense we’re going back to Trinity’s roots,” Scholnick said.