How Wall Street makes its money now, in one chart 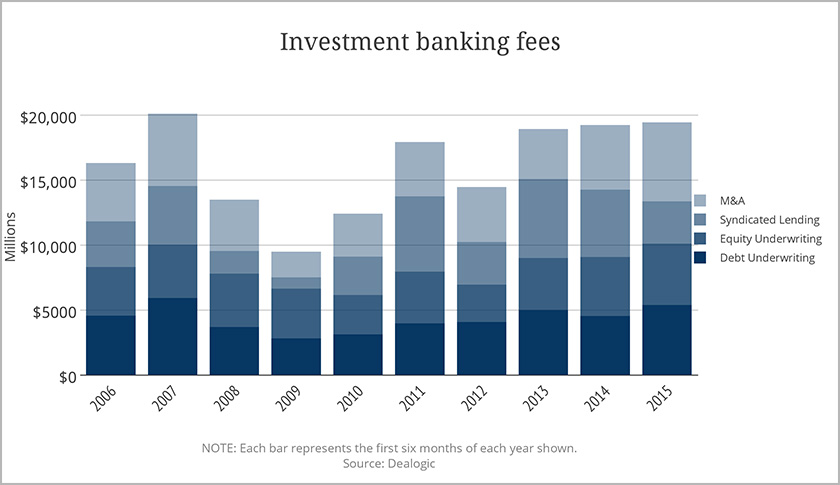 Five years after the Wall Street Reform and Consumer Protection Act (aka. Dodd-Frank) was passed, Wall Street has survived, and it’s thriving again, though not quite as much as it used to.

One example: investment banking fees collected on U.S. deals in the first half of this year totaled $19.5 billion. That’s the second highest amount of fees that Wall Street firms have ever collected in any six-month period. And it’s only 3% lower than the $20.1 billion in fee investment banks collected in the first half of 2007, which was the most ever. And the breakdown of fees doesn’t look all that different from a decade ago (see chart above).

That just one sign the landmark banking reform bill that was passed in the wake of the financial crisis has not changed the business of Wall Street as much as some hoped. Trading, for instance, still makes up a large portion of money that is brought in by the big banks. Nearly five years ago, Fortune computed the percentage of revenue each of the big banks got from trading. The numbers were for 2009, the year before Dodd-Frank. I updated the numbers to see how Dodd-Frank had reshaped Wall Street in its first half decade, at least when it came to trading. The answer: Not much.

And the big banks still devote a good portion of their assets to their trading businesses. At JPMorgan, for instance, the bank has $724 billion in trading assets, which includes its large derivatives book. That’s only down slightly from the $741 billion it had in its trading business in 2009. But JPMorgan’s overall assets have grown to $2.45 trillion from $2 trillion. So trading assets have shrunk to just over a quarter of the total. At Bank of America (BAC) , trading assets are also down only slightly, to $240 billion from $263 billion in 2009.

Overall, though, trading revenue is down. The nation’s six biggest banks, which also includes Citigroup Inc. (C) and Wells Fargo & Co. (C) , generated $50.5 billion in trading revenue in the first half of 2015. That’s down 20% from five years ago.

Also, it’s not clear what this says about risk. Wall Street’s biggest have had to ditch, at least formally, their so-called proprietary trading operations, which is when the banks are directly trading their own money, like a hedge fund would. Instead, the banks now appear to make most of their money completing client transactions. But banks can still lose money facilitating client trades. Earlier this year, for instance, Citigroup lost money when the Swiss Franc suddenly rose in value. A lot of money can still be lost in trading low-volatility assets if the volumes are big enough.

Dodd-Frank has reshaped the banks in other meaningful ways. Perhaps the biggest is that all of the banks are required to hold more capital to protect against losses than they used to. And that’s good news. Because their trading operations could still lose them a lot of money.