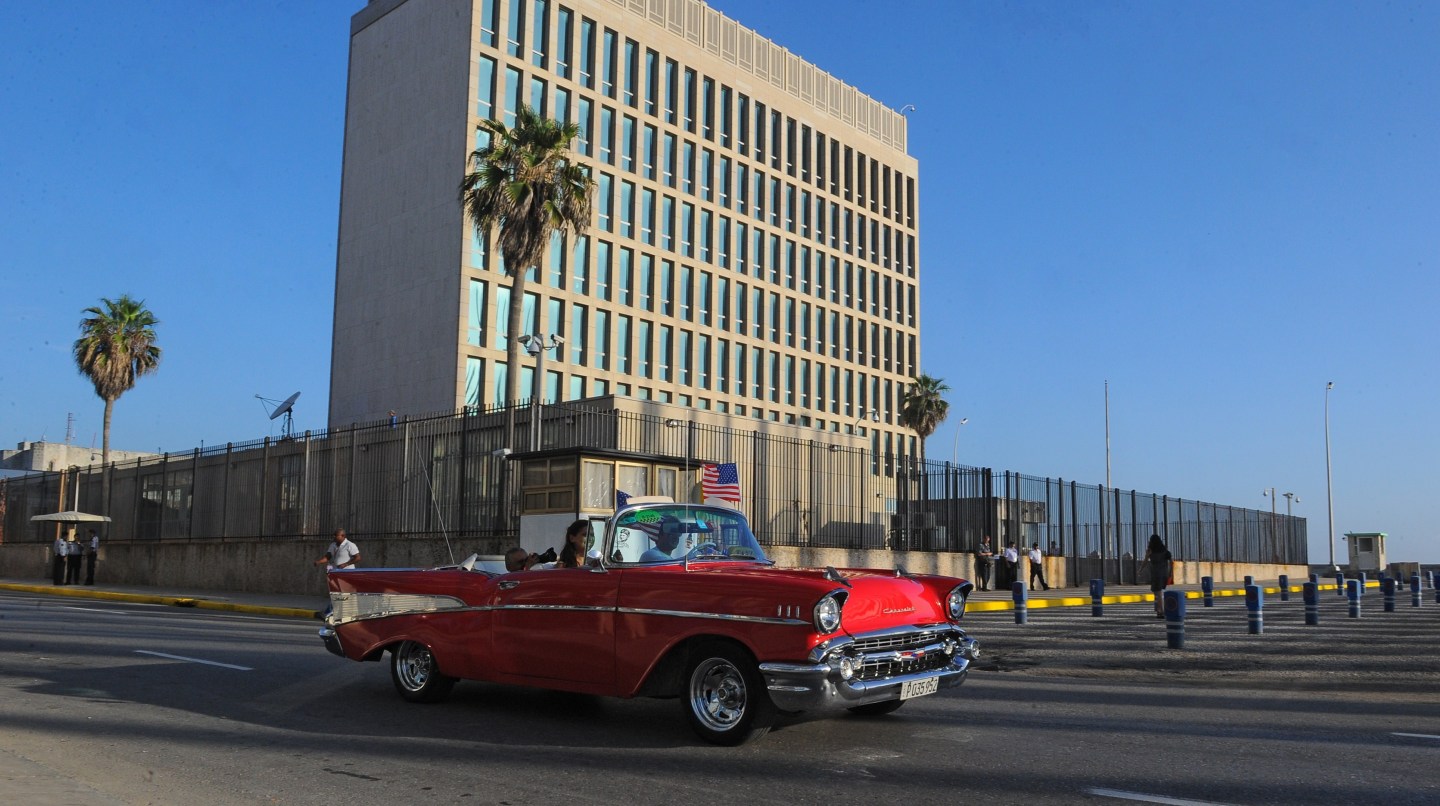 A vintage car with US flags drives by the US embassy in Havana, on July 20, 2015. The United States and Cuba formally resumed diplomatic relations Monday, as the Cuban flag was raised at the US State Department in a historic gesture toward ending decades of hostility between the Cold war foes. AFP PHOTO/YAMIL LAGE (Photo credit should read YAMIL LAGE/AFP/Getty Images)
Photograph by Yamil Lage — AFP/Getty Images

As the U.S. embassy reopens in Cuba on Monday, an American flag rises in Havana for the first time since 1961. Now that our diplomatic reconciliation with our estranged neighbor is well under way, we have another opportunity to extend our ties with Cuba. Political barriers are coming down, but to strengthen our partnership, we need to help unleash the potential of Cuban entrepreneurs.

Since Airbnb began operations in Cuba in April, over 2,000 Cubans have made their homes available to American travelers through our online apartment rental site. Cuban entrepreneurs have been sharing their homes to make extra money for decades, so we were able to build on an established network of casas particulars — a network of private homestays that have long been a choice for visitors, as well as a source of income for thousands of Cuban families.

On a recent trip to the island, I saw that the entrepreneurial spirit is everywhere in Cuba. They even have a name for it – cuentapropismo. There may not be many retail shops or billboard advertisements, but entrepreneurialism is humming just beneath the surface. In fact, over the past few decades, the Cuban government has enacted economic reforms that created more space for these entrepreneurial activities.

Today, thousands of professional dancers, painters and writers use their talents to earn income as independent artists. Havana’s first public wi-fi café is open for business, while outside vendors sell fruits and vegetables, CDs, and cell phone accessories. Independent restaurant owners, known as paladares, have even started training programs for younger Cubans who learn how to run businesses themselves.

Still, being an entrepreneur in Cuba isn’t easy. During my trip, I met Julio, who runs a small business refurbishing old cars that transport tourists around Havana – and it requires every bit of ingenuity he can muster. He can’t get the parts he needs to fix up the cars directly, so he has to go through a middleman in Miami who tacks on a 20% surcharge. He has to pay another middleman to host the server for his company’s website to get the word out to prospective American travelers. All of these constraints make it hard to start, let alone grow, a business in Cuba.

The potential is there to reap the rewards of a global economy – but the American private sector can do more to help unleash it.

During my trip, I asked Cuban entrepreneurs what they needed to flourish in this new era. They said three things:

First, they need greater Internet connectivity. Cuba is one of the world’s least wired countries, which makes it hard to access global markets or support online payments. The entrepreneurs I talked to are determined to carry on regardless of Internet access. But they all agree that it would allow them to operate on a different scale.

Second, Cuban entrepreneurs need our business. Political rapprochement will mean little to average Cubans if they can’t benefit directly from the surge of travel by Americans. When travelers book stays through Airbnb, the money goes directly to Cuban citizens. And a little extra money can go a long way in Cuba. The average Airbnb host in Cuba earns an average $150 to 250 per rental, which represents a significant supplementary income in a country where average workers earn $25 per month. In turn, Cuban entrepreneurs can use the money they make to invest in improving their homes or buying equipment for their businesses, bolstering other local businesses.

Third, American businesses should build bridges to ordinary Cubans that make it easier for them to sell their resources and skills and access new markets. Based on my conversations with entrepreneurs in Cuba, they are eager for more tools that enable anyone to become an entrepreneur in a matter of minutes – a possibility that was unimaginable here just a few months ago.

The reopening of the U.S. embassy is an exciting and important milestone, but real change will ultimately come from Cubans and Americans working together, learning from each other, and building new friendships that transcend the past, and help both nations forge a brighter future.

Nathan Blecharczyk is co-founder and chief technology officer of Airbnb.