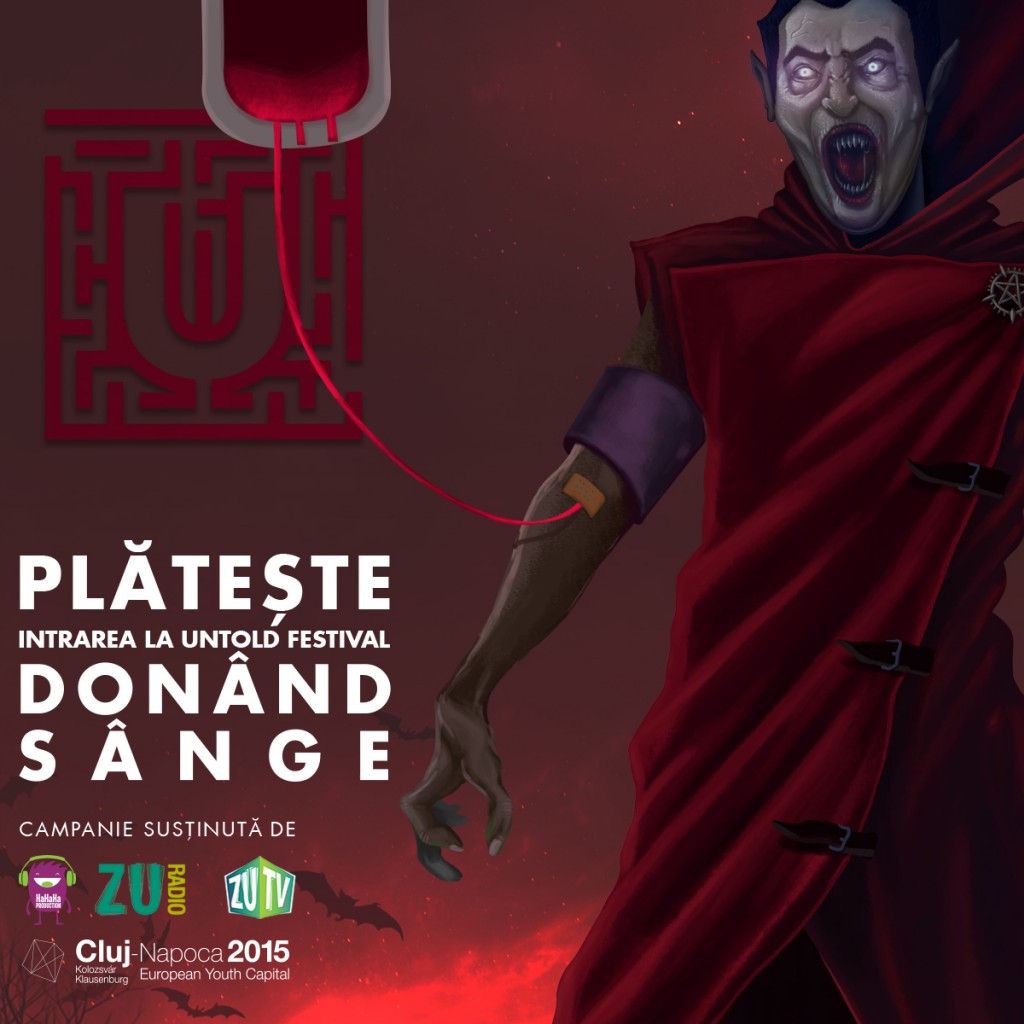 A music festival in Romania's Transylvanian region advertises its "pay with blood" option for buying tickets.
Courtesy of Untold Festival

It’s a business proposal that might actually make Dracula smile: In the Transylvania region of Romania, you can now use your own blood as a form of payment.

At least, that’s what an electronic music festival is offering to fans seeking free or discounted tickets to the 4-day event beginning there later this month. The Untold festival kicks off July 30 in Cluj-Napoca, the largest city in the northern part of Romania known as Transylvania, where Bram Stoker’s classic vampire novel Dracula is set.

The festival’s headline performers include leading DJs such as Avicii, Armin van Buuren and David Guetta.

Untold’s organizers are offering free one-day passes to the festival to people who donate blood at certain transfusion centers in Romania’s capital city of Bucharest and in Cluj-Napoca on specific dates in July. Those who give blood at other Romanian donation centers anytime until July 24 can also receive a 30% discount on festival tickets, according to the Guardian.

Romania’s tourism industry has long capitalized on the notoriety generated by its Dracula association: Hotels and historical sites have adopted the name of the famous vampire, and tourist destinations sell t-shirts, postcards and other souvenirs bearing bloody fangs or Count Dracula illustrations.

The Untold festival’s “pay with blood” promotion, however, is primarily intended to help alleviate a blood shortage in medical centers across Romania by increasing the amount of blood donors there, event organizers said in a statement. Only 1.7% of the country’s population donates blood—one of the lowest rates in Europe, they said.

But the vampire theme wasn’t exactly lost on them. “We were talking about how to incorporate Dracula into our festival and after seeing the numbers and how behind Romania was in blood donations we had this idea,” Untold spokeswoman Stefana Giurgiu told the Guardian.

Untold is only one of a string of music festivals and other cultural events taking place this year in Cluj-Napoca, which was named the European Youth Capital for 2015. While Romania is a member of the European Union, it has yet to adopt the euro and its official currency is the leu. Still, if other businesses and events emulate Untold’s model, perhaps blood will become a viable alternative payment.