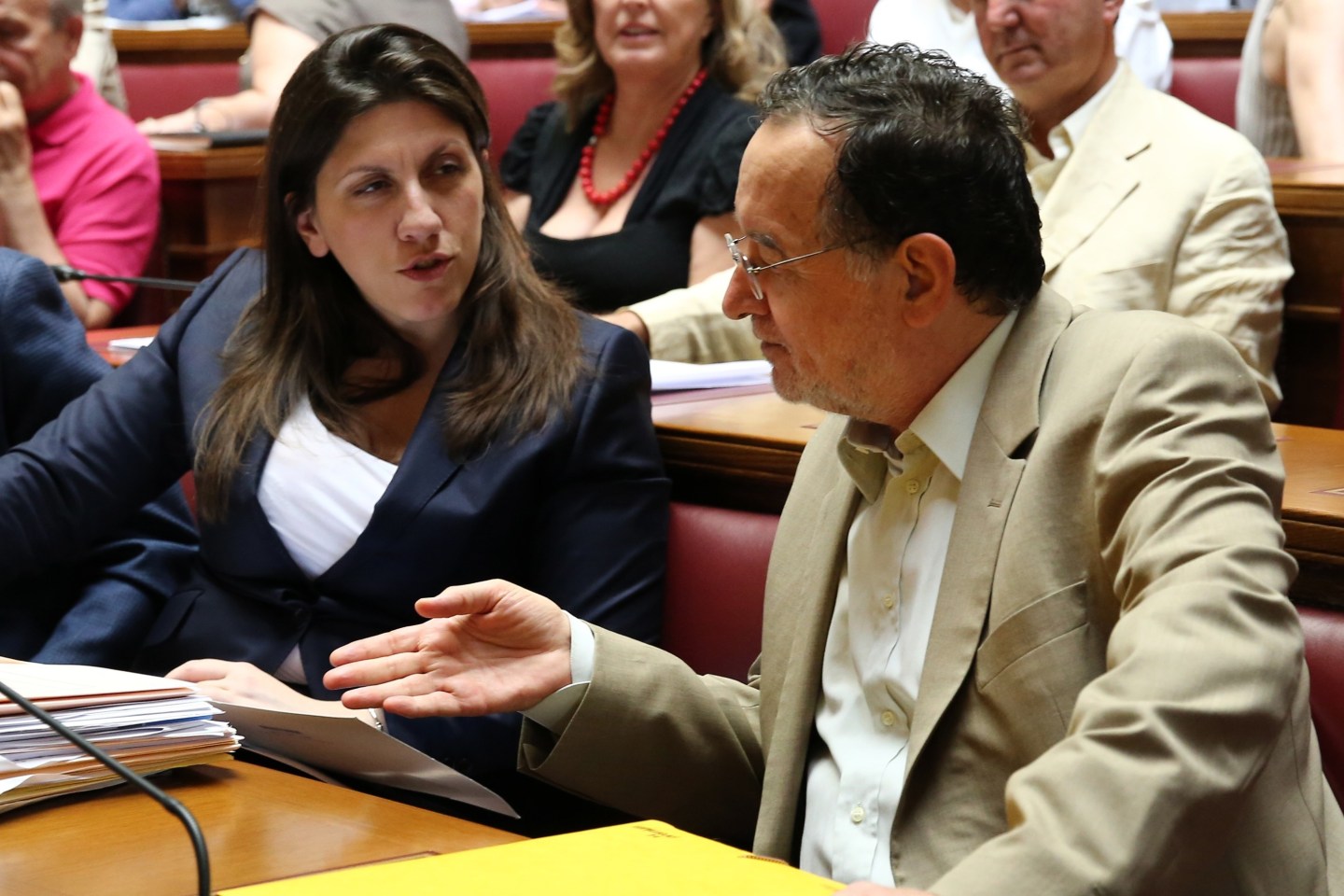 ATHENS, GREECE - JULY 15: Minister of Productive Reconstruction, Environment and Energy Panagiotis Lafazanis (R) speaks with President of the Greek parliament Zoi Konstantopoulou (L) attend SYRIZA's Parliamentary group meeting in the Greek Parliament in Athens, Greece on July 15, 2015. On the right is Syriza MP Nikos Manios. Debate on reforms that are key to a preliminary agreement with creditors to keep Greece out of bankruptcy began in the country's legislature, but fissures were already beginning to show among the ruling SYRIZA party. The third Greece bailout agreement that was agreed on by the Eurozone leaders on 13 July morning after 17 hours of negotiations has to be approved by several national parliaments, including the Greek. (Photo by Ayhan Mehmet/Anadolu Agency/Getty Images)
Photograph by Anadolu Agency/Getty Images

The 40 year-old prime minister dismissed Energy Minister Panagiotis Lafazanis and two deputy ministers after 39 Syriza hardline lawmakers refused to back the government over the measures, which were demanded by Eurozone partners as a pre-condition for beginning talks over a new bailout.

The main economic ministries remain unchanged, with Euclid Tsakalotos remaining in place at the finance ministry and George Stathakis staying at the economy ministry.

But Labor Minister Panos Skourletis, one of Tsipras’ closest allies, will replace Lafazanis in the key energy portfolio, where he will be responsible for sensitive privatization dossiers. Administrative Reforms Minister George Katrougalos will take over at the labor ministry.

The reshuffle had been expected ever since the party rebellion left Tsipras dependent on the votes of pro-European opposition parties to pass the bailout deal but it is not likely to change the uncertain overall outlook for the government.

Former Deputy Finance Minister Nadia Valavani, another bailout opponent who resigned earlier this week before the vote, was replaced by Tryfon Alexiadis, a leading member of Greece’s tax experts’ union.

The new ministers are expected to be sworn in on Saturday.

The reform package, including pension adjustments, value-added tax hikes, an overhaul of collective-bargaining rules and tight limits on public spending, was approved with 229 votes in the 300-seat chamber in the early hours of Thursday, with only the Neo-Nazi Golden Dawn, the Communists, and the Syriza dissidents voting against.

It’s unclear whether the revolt will grow as the painful reality of implementing the proposed reforms hits home. Tsipras has ruled out immediate early elections before a bailout deal is actually agreed, but Interior Minister Nikos Voutsis said this week that elections may come in September or October.

Earlier in the day, German Chancellor Angela Merkel had faced a revolt of similar proportions in the Bundestag as lawmakers voted to approve the start of talks on a new bailout–albeit the revolt was restricted to backbenchers. In contrast to Tsipras, who had to depend on opposition lawmakers to pass the reforms, Merkel still has a huge majority, due to her “Grand Coalition” with the largest left-wing party in Germany, the Social Democrats. All the same, some 5o backbenchers from her own party revolted, compared to only 12 who voted against the second bailout and debt restructuring agreement in 2012.

Merkel had warned lawmakers of “violence and chaos” in Greece if it left the Eurozone in a disorderly manner, although she distinguished that from the “orderly” time-out from the currency union that she and Finance Minister Wolfgang Schaeuble had argued for last weekend.

Schaeuble told the Bundestag that Greece would be better off outside the Eurozone because it needs to cut its debt load, and absolute write-downs of other Eurozone members’ claims against it would be illegal under the rules of the common currency. Some analysts dispute this, and scarcely anyone sees the prospect of it rejoining the Eurozone after five years–as Schaeuble suggested–as realistic.

And yet, the circle has to be squared, or else the International Monetary Fund will refuse to sign up to the new deal. The IMF’s involvement is a key demand of the Eurozone creditors, not only because it would lend credibility, but because its money is wanted in order to keep the final bill down for Eurozone governments. Asked by radio station Europe 1 whether the new deal was viable without debt relief, IMF managing director Christine Lagarde said: “The answer is a categoric ‘No’.”

With material from Reuters.