Delta’s secret VIP service picks up celebs on the tarmac 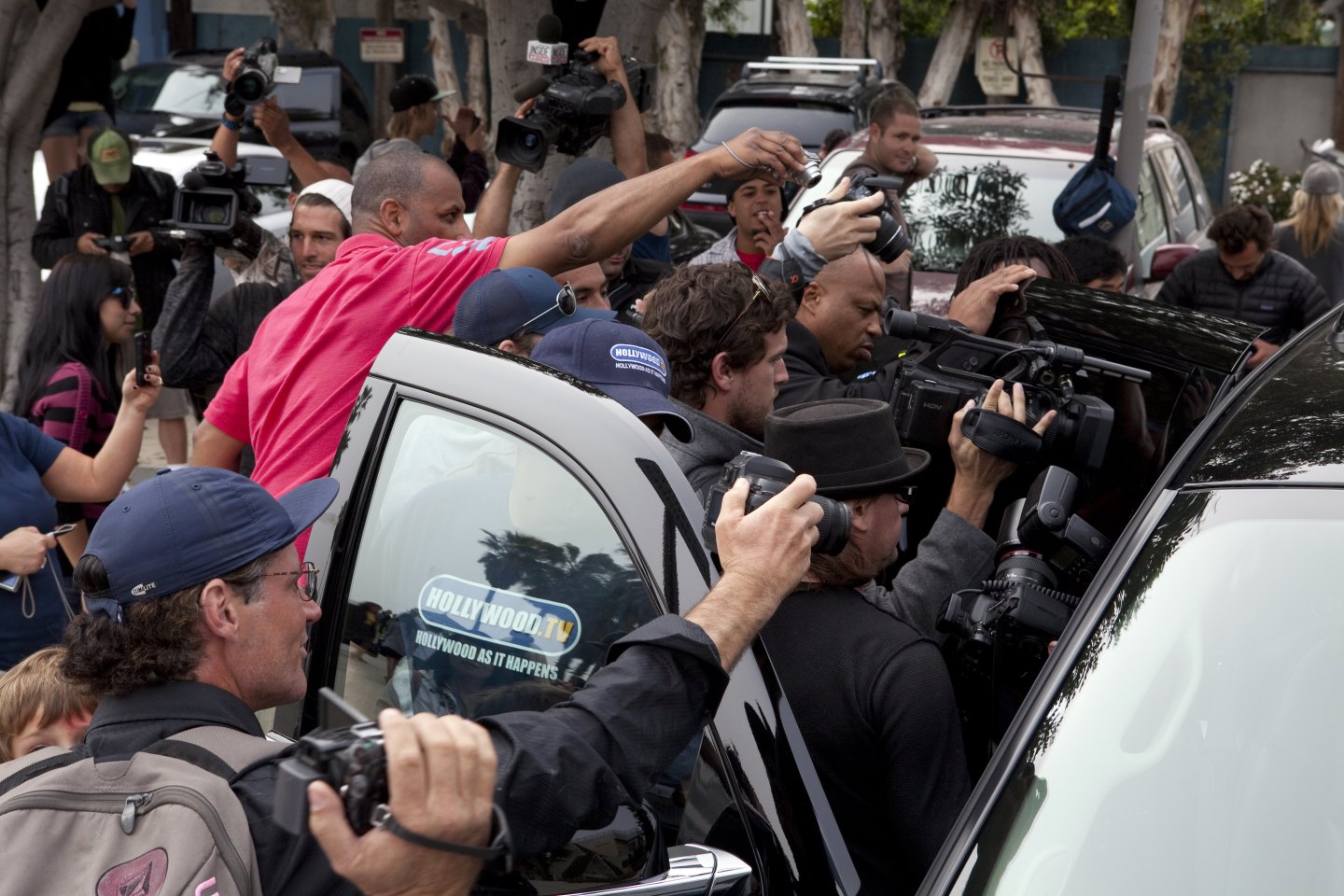 VENICE BEACH, CA - APRIL 16: Paparazzis stalk Lindsay Lohan after a visit with her lawyers, on April 16 2010, in Venice Beach, California. Several of them work for Francois Regis Navarre, who has revolutionized the way paparazzis track celebrities and the owner of X17. Navarre came to the U.S from France in the 90's to be a mainstream newspaper correspondent. He free-lanced for prestigious Le Monde, but became fascinated by Hollywood and decided to become a paparazzi. After several hugue scoops, including the first pictures of Michael Jackson's children, he founded X17, today one of the world's most succesful paparazzi photo agency. With his American wife Brandy, Navarre employs between 60 and 100 photographers and various tipsters (valet car employees, restaurant workers, limo drivers, and even street bums). Today, X17 generates 12 millions dollars a year. Navarre is credited with changing the ways paparazzi stalk their prey: he used video before it became trendy, assigned full time crews to specific neighborhoods or celebrities (15 people full time on Britney Spear, for example), and revolutionized how paparazzis work: "I asked my paparazzis not to hide anymore, but instead to wait on the sidewalk with wide-angle and a flash", giving birth to the clusters of paparazzis following celebrities in the open. Navarre does not hide either: he lives in a luxury house in Pacific Palissades, an exclusive Los Angeles neighborhood prized by Hollywood stars. (Photo Gilles Mingason/Getty Images)
Photograph by Gilles Mingasson — Getty Images

It was one of the last holdouts for Us Weekly photographers and autograph-hungry fans seeking rare up-close access to celebrities: It’s the baggage-claim areas and exits from Los Angeles International Airport. Delta Airlines (DAL), however, has a new service that will put an end to all the paparazzi hassles with a new stealth-exit service. As of last month, VIPs no longer need to depart LAX like the common people.

Delta’s new “secret” service—under the banner of the airline’s VIP Select program—is targeted at stars, heads of state, and rushed CEOs who simply don’t have the time or inclination to amble down to carousel C. Passengers who opt for the service, which costs $350 on top of a full-fare first-class ticket, will be met on the tarmac by a driver in a brand-new Porsche Panamera sedan or Cayenne SUV who will whisk them and their luggage out of the airport via a private exit (their checked bags will be specially tagged at check-in and are taken off the plane first by the ground crew and loaded into the car). They will be driven to an undisclosed location on Century Boulevard where they will be met by their own car and driver.

Though Delta won’t disclose numbers of those who have taken advantage of the new LAX-exit service, it only debuted in June, so likely only a handful of early adopters have taken the secret-exit Porsche ride.

Ranjan Goswami, Delta’s vice president-sales, west region, was one of the executives who spearheaded the new service. He says, “The exit-LAX transfer was something that people have asked for for years, and the response has been phenomenal. TMZ and other paparazzi stake out the baggage-claim area, and our famous customers told us that they would love to have a product that helps them avoid being photographed after a long flight.”

Known Delta passengers like Nicole Kidman and Michael Francis, chief creative officer of DreamWorks (DWA), can now enter Delta’s Terminal 5—which has just gotten a stellar $229 million makeover—through the curbside frosted-glass doors of the VIP Delta One lounge. Once inside, their bags are checked and they take a private elevator which leads to a dedicated VIP security checkpoint. Finally, a Delta ambassador will whisk them into the sleek new Sky Club where they can kick back, take a shower, have a drink, or network with their fellow power players. Naturally, they then board the plane before the hoi polloi.

Founder and president of Airfarewatchdog.com George Hobica is a travel expert who has sampled the best that the airline industry has to offer. He has seen an uptick in celebs choosing to fly commercial, in large part because of service upgrades like Delta’s VIP Select. He says, “I think all airlines are trying to win the business from celebrities, and I think celebs have come to expect incredible service these days.” Above-and-beyond services like the private exit from LAX also helps airlines’ bottom lines. “VIPs tend to have a lot of money and therefore pay full freight—or their record companies/studios do—unlike frequent-flyer-status freeloaders who get free seats or upgrades, so they are very profitable customers.”

Hobica adds,”Celebrities are afraid of being shot by paparazzi and being asked for autographs. I have recently seen Angelina Jolie as well as Coldplay’s Chris Martin on the same commercial flight, so superstars are on these flights. If all the private jets are in the shop or the schedules don’t work for their shoot or budget, a lot of famous people fly the same planes as the rest of us—although the way they get to their seats is much more discreet.”

There are a couple of other airlines around the globe that offer similar luxe services. For example, for a roughly $2,500 fee, London’s Heathrow Airport offers an elite service called Heathrow VIP to holders of business- or first-class tickets on any airline that the airport serves. This option includes the delivery of passengers to their plane, pre-flight, via a luxury limo.

Some may wonder about the safety of driving Porsches onto airport tarmacs, but Ranjan Goswami promises the service was fully vetted by Los Angeles World Airports, the city agency that owns and operates all LA-area airports. “Like everything, you need to make sure that any product or service is secure, especially at a large airport like LAX. We partnered very closely with Los Angeles World Airports. It was great because we walked through everything we needed to make sure that the service was secure.”

And when asked if he had some superstars who had taken advantage of the service, Goswami was mum. “We take pride in the fact that discretion is our number one priority. I kind of love the idea…you’d be hard-pressed to find the names of people that have taken advantage of our service because of how it’s run.”