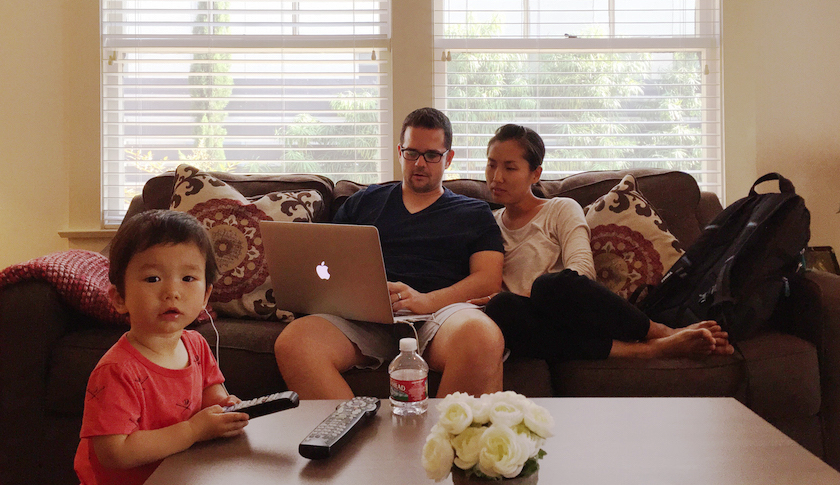 Daniel Lombardi is a creative director in Irvine, Calif., who designs for clients all over the country. He also has a young child. Ten years ago, his wife encouraged him to start a freelance career, and now he says the flexibility is an excellent way to be an engaged father to his son.

“If I were nine to five, there would be restrictions. As a freelancer if I plan ahead, I can be at every one of his doctor’s appointments. I can be at every one of his baseball games. I can go to his Karate or switch off with my wife, or whatever. I’m not restricted in any way,” Lombardi explains. “I am able to plan everything around my family schedule. If that means I have to work at night or I get up at five in the morning, that’s fine.”

Lombardi is not alone. Parents or potential parents make up the largest generational groups of freelancers. According to numbers from 2012 by Elance.com, a major online freelancing site, the majority of freelancers are either Generation X (born 1965 to 1980) or millennials (born 1981 to 2007). Using the childbearing years as a guideline, many of them have or will have families living at home, many with young children in the house.

Not only are more parents exploring their options, but freelance employment is on the rise overall. A 2010 report by Intuit predicted that by 2020, contingent workers would comprise 40% of the nation’s total workforce. The report also forecast that 80% of large corporations would invest in a flexible workforce in that same period.

Cheryl Baltes, founder of Shores Editorial Service, managing editor of several different journals for the tech industry, and mother of middle school-aged twins also enjoys the benefits of being her own boss. She started freelancing after her twins were born 13 years ago. She was also the president of her local PTA and the leader for her daughter’s Girl Scout troop. She credits her ability to wear many hats to her freelancing status.

“With the different journals I’m responsible for, I manage both short-term and long-term deadlines so I could make it work. I did hundreds of hours of volunteer work. I am working full time. I’m a PTA volunteer and a Girl Scout volunteer, and my kids are going different places … that all works when you are a freelancer. It just doesn’t work when you are in an office.”

Nor does Baltes see a return to the office in her future.

“I just don’t think I could go back to the commute. That’s just so many hours wasted, just sitting in the car,” she says. “I just get more work done as a freelancer … When you sit down to do four hours of work, you do four hours of work. There are no staff meetings, no special projects, just work. I also go outside more. My quality of life is so much higher.”

Baltes and Lombardi both work full-time, but they are not the majority. Most freelancers work part-time.

Payoneer, Inc., a global payment company, found in its Freelancer Income Survey 2015 that around the globe, the average freelancer works 36 hours and makes $21 an hour, with a wide range in the number of hours worked. According to the numbers revealed from 23,000 freelancers from 180 countries, the great majority were in their 20s and 30s.

The range of freelance professions expands far beyond designers and editors. Fields include IT and programming, engineering, human resources, and even legal consulting (which commanded some of the top rates at $33 an hour on average, according to the Payoneer report).

Both Lombardi and Baltes say they earn more now than when they had traditional jobs, but it didn’t happen overnight. Lombardi started with one client, and Baltes launched her freelance career with the occasional article edit. Over time, they built sustainable businesses using their expertise and a growing network of contacts.

Freelancing has other drawbacks as well. Lombardi doesn’t like selling himself as a designer and recalls during lean months wishing he had saved money from the bigger months. Baltes admits that freelancing can be lonely, and with her responsibilities, it’s difficult to ever be completely off the clock. But for both, the benefits far outweigh the negatives.

For many parents though, leaving behind full-time work may be too daunting. It requires booking continuous jobs to make enough money to support their children. There are also obvious benefits—like health insurance plans for the whole family—that typically accompany traditional jobs. For parents who aren’t quite ready to make the leap to freelancing, Lombardi says he understands and offers this advice:

“It’s scary, regardless. But I found that if you want it enough, you can make it work.”