Can the right gear protect soccer players from concussions? 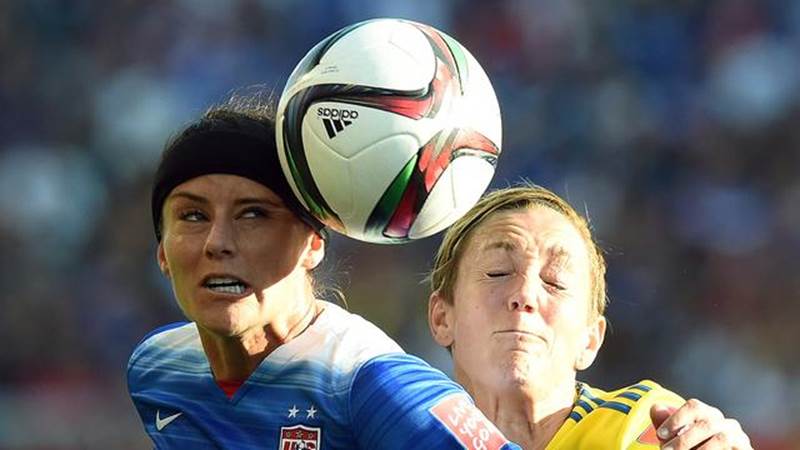 Looking back, it seems crazy to think that there was a time when football and hockey players weren’t required to wear helmets. And in the wake of the 2015 Women’s World Cup, some fans are beginning to wonder whether we’ll someday view the lack of protective head gear on modern soccer fields with the same sense of dismay.

While the brutal collision between Team USA’s Morgan Brian’s and Germany’s Alexandra Popp during the Cup semi-final certainly brought home just how poorly players are protected, it’s worth remembering that not all head injuries are so readily apparent.

Indeed, there are important distinctions between the two main types of head injuries. First, the obvious one: Concussions, which show themselves almost immediately through symptoms like headaches, nausea and blurred vision. Because the signs are so apparent, measures are generally taken to identify and treat concussions sustained during play. Sub-concussive brain injuries, on the other hand, are caused by minor but continuous blows to the head. They leave the brain susceptible to more serious injury, have long-term effects and, worst of all, are asymptomatic, which often results in parents and coaches putting players back into the game in a weakened state.

Rob Vito, president of Unequal Technologies, explains sub-concussive brain injuries this way: “Imagine you took a hammer and you’re hitting a granite counter top. It doesn’t crack at first, but around the seventh or eighth hit you start to see the spider cracks in the granite counter top, and then finally you start to see pieces of rock coming out.”

With the market for products designed to protect people from concussions beginning to boom, firms like Vito’s are attempting to carve out a niche for gear made specially for the soccer field. Unequal Technologies makes the Halo protective headband, which got some attention when U.S. soccer veteran Ali Krieger wore the device during the 2015 Women’s World Cup. Like other protective headbands on the market, the Unequal Halo, which starts at $30, is designed to absorb and disperse much of the impact soccer players sustain to their head during play. While such products do not claim to prevent concussions entirely, studies have found that players are 2.65 times more likely to suffer a concussion without one.

“Every time you’re hitting the ball with your head, that ball is coming in between 60 and 80 mph,” said Vito. “That energy might not be enough to cause a concussion at that point, but if it continues to go on, it weakens your resistance” and may ultimately result in a concussion.

A 2012 study found that 92,505 high school student suffered concussions while playing soccer that year, and a 2002 study suggests that 62.7% of all college-level soccer players showed concussion symptoms over the course of a single year.

Vito and other makers of protective gear say that, when first introduced, the products met with resistance from league officials at all levels.

“Thirteen years ago they were arguing that they did not want soccer to be exposed as a contact sport because it was marketed as a non-contact sport,” said Jeff Skeen, the founder of Full90. Skeen’s company offers a line of protective headbands and helmets for soccer players starting at $35; he says Full90 products have been sold to roughly 200,000 players. “A referee, following the orders of U.S. soccer, took this protective headgear off of my daughter’s head, saying it was illegal equipment, and my daughter suffered her third concussion—one that she has still not fully recovered from.”

Ultimately, league officials identified soccer as a contact sport, and in 2004, FIFA revised the official rules to allow headbands, provided that they are soft on the outside and don’t affect the trajectory of the ball.

But even with governing bodies like FIFA and US Soccer sanctioning the gear, the soccer-playing community has been slow to accept and implement the equipment on a wide scale.

“Safety is the hardest concept to sell,” said Dr. C. J. Abraham, who says he has been testing and developing protective sports equipment, including his own $15 ForceField Protective Headgear, for more than four decades. “In ‘macho’ sports, even with women playing, they don’t like to look like they’re wearing a helmet or protective headgear.”

Abraham, like others in the industry, hope that protective headwear will soon become as common as a soccer field sight as cleats and shin guards.