Yes, fans are being hard on the U.S. Women’s World Cup team. And that’s a good thing. 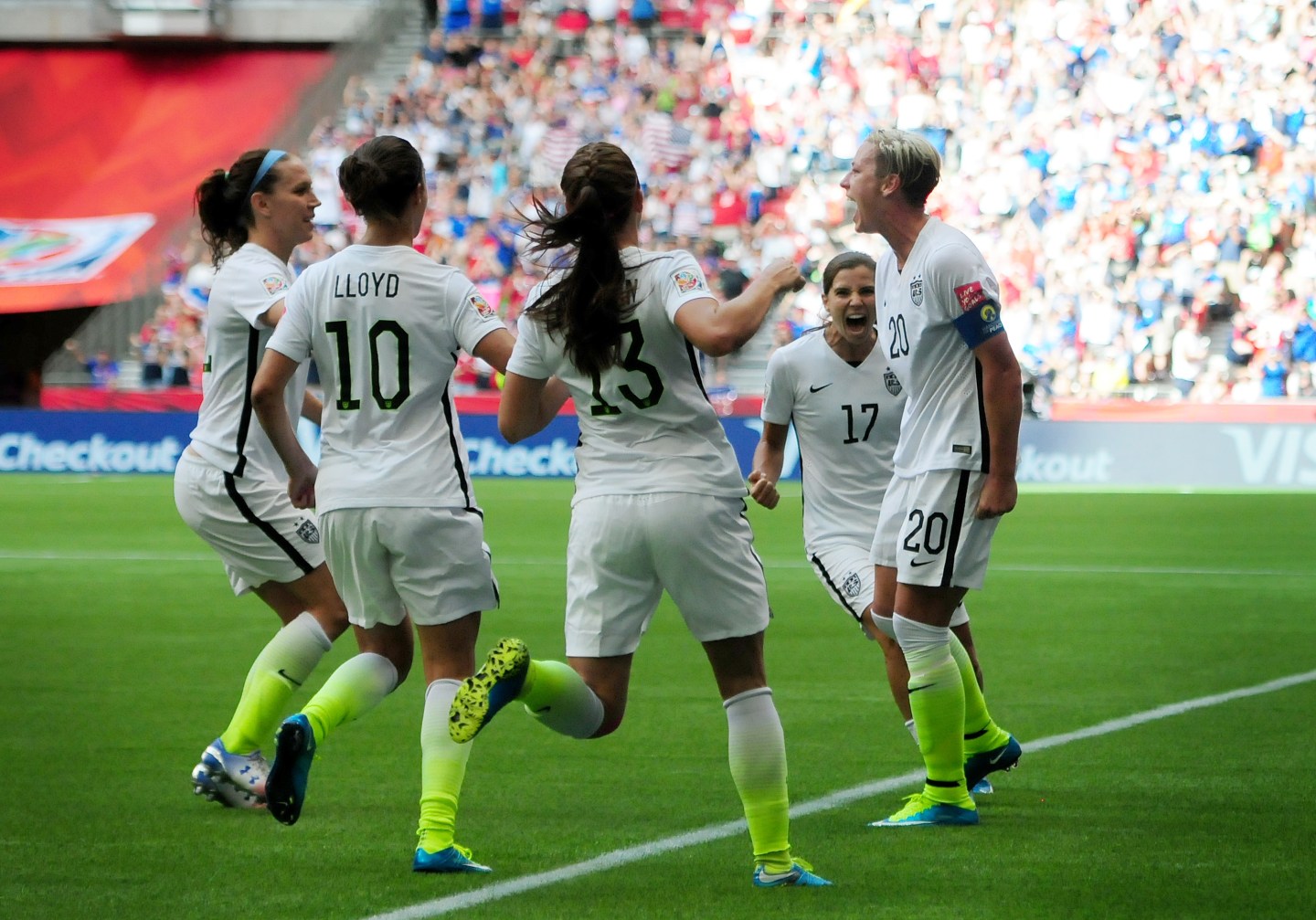 June 16, 2015: United States forward Abby Wambach (20) is congratulated by teammates on a late first half goal that propelled the team past Nigeria on Tuesday at BC Place in Vancouver, British Columbia. They are midfielder Carli Lloyd (10), forward Alex Morgan (13) and midfielder Tobin Heath (17). (Icon Sportswire via AP Images)
Photograph by Kathleen Henkel — AP

There are four teams left in the Women’s World Cup, and just as every other time the tournament has been contested since 1991, the U.S. is one of them. The Americans will take on Germany Tuesday night in the semifinals, striving for their first World Cup championship since 1999. While the U.S. goes into that match as an underdog, everything from the team’s defensive record (one goal conceded) to the spiking TV ratings is good news for the Americans—and for the companies that have wagered that women’s soccer can succeed as a spectator sport.

A reported 5.7 million people watched the U.S. beat China in the quarterfinal last week, the third largest audience ever to tune in for a women’s soccer match. In Nielsen’s Twitter TV ratings, which measure the social media mentions of a given program, four of the top ten sporting events last week were Women’s World Cup matches. (Two men’s soccer matches also made the list, which means soccer enjoyed a rare moment in the spotlight.) Overall, viewing numbers have risen 42% from the last Women’s World Cup. That’s partly due to Canada’s favorable time zone for American fans—the 2011 cup was staged in Germany—but it’s also part of the game’s well-documented move toward becoming popular entertainment.

For serious fans of the sport, it’s especially heartening to learn that huge numbers are tuning in, not only because we want more Americans to catch the bug but, perhaps paradoxically, because we know that the U.S. women haven’t been playing particularly well. Those of us who watch closely, analyze the games, and pine for this substitute or that tactical adjustment—we’re not only rooting for our team to win but to win beautifully, with lots of goals to fill up the highlights reels and persuade even more people to watch.

It’s true that the U.S. women haven’t conceded a goal since the first half of their first match, against Australia, and they ultimately won that game 3–1. But then they tied Sweden in a goalless draw—the kind of scoreline a true soccer fan can appreciate even though we know it confuses the rest of our countrymen. The U.S. followed that with a 1–0 win against Nigeria, a 2–0 Round-of-16 victory over Colombia, and another 1–0 win over China in the quarterfinals.

It was only in the most recent game against China that the U.S. dominated its opponent in the way we’ve come to expect. A couple of tweaks to the midfield (both forced by the suspension of key players) and another at forward opened up the most dynamic attacking play we’ve seen from the team all tournament. In previous games, the play either went through the left side, where Megan Rapinoe is such a threat, or it bypassed the midfield altogether, with long balls lofted toward the strikers.

In years past, we might have excused these tactics. Rapinoe is brilliant on the ball, and our target striker, Abby Wambach, is not only the all-time leading scorer—man or woman—in international soccer, but especially dominant in the air. Suddenly, however, in conversations among fans and exchanges on Twitter, it appeared that many Americans viewed this strategy as a shortcoming.

The new approach worked against China and the relief among fans was immediate. While there’s still an element of ra-ra nationalism in the expressions of support, but the critical nature of the discourse around the team feels new. This more mature level of engagement between fans and the game bodes well for the future of women’s soccer in America. It isn’t anything you can measure, like tweets or viewers, but for U.S. soccer fans, that feeling of progress is much more meaningful than anything Nielsen can tell us.