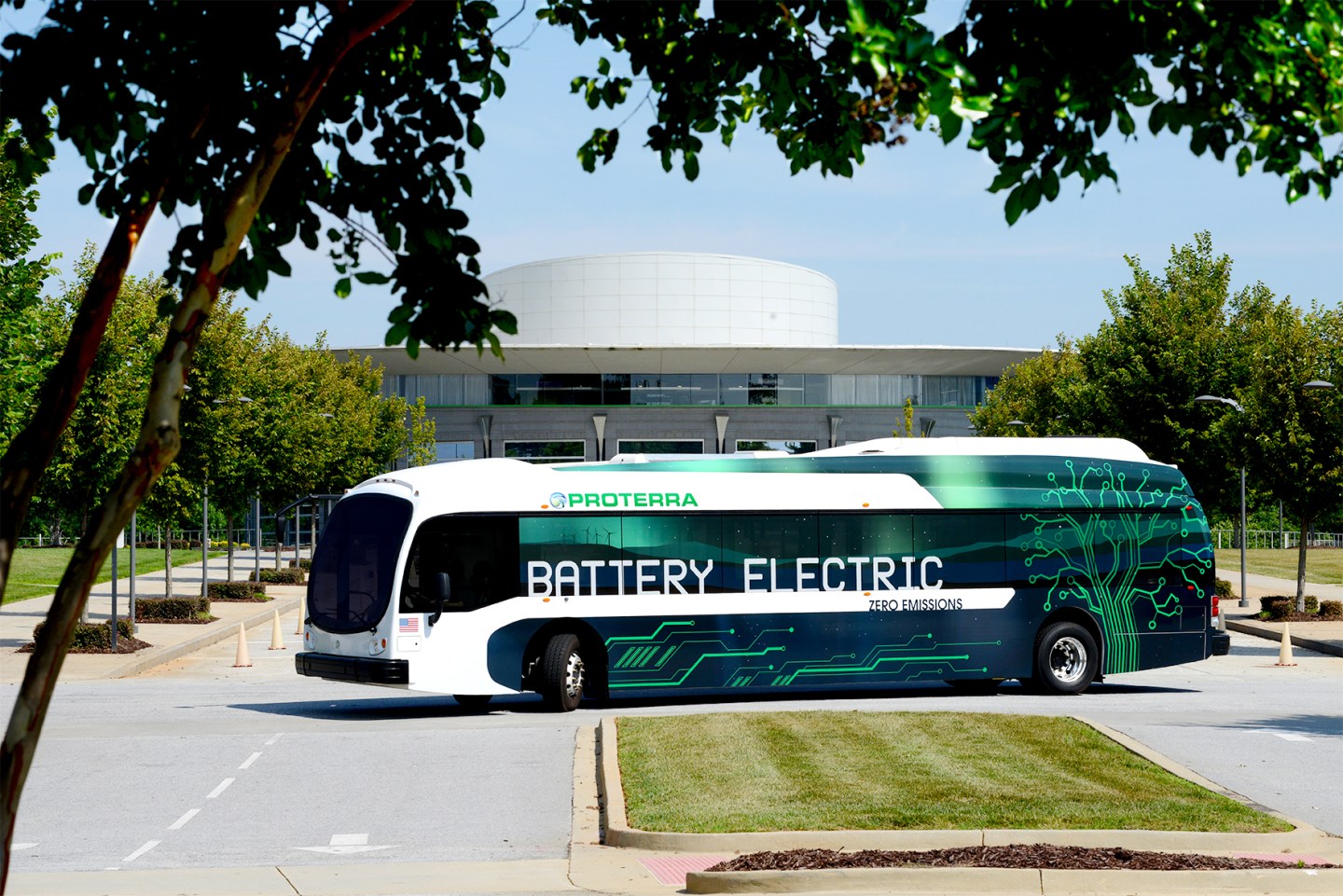 Today’s diesel buses—including the estimated 500 “tech buses” that shuttle workers around the San Francisco Bay area—get around three to four miles to the gallon. Proterra makes an electric bus that is five times more efficient, and doesn’t clog up streets with diesel exhaust.

There’s a catch: the upfront cost. The buses, which use a battery pack and drivetrain designed by Proterra, battery cells from Toshiba and LG Chem, and a carbon fiber composite fuselage, are more expensive to buy than their fossil fuel-powered peers.

However, Proterra—and the investors who just dumped $55 million into the the Greenville, S.C.-based company—believe falling lithium-ion battery prices, lower repair costs, and long-term fuel savings will allow the buses to compete against diesel-powered models and begin to chip away at transit run on fossil fuels.

“Buses are the least efficient vehicles on the roads, with exception of maybe tractors and mining equipment,” CEO Ryan Popple told Fortune. “And even with historically low diesel prices our business hasn’t slowed because battery prices are dropping.”

Tesla’s massive gigafactory near Reno, Nevada will have the capacity to produce 50 gigawatt hours of battery packs a year once it’s complete, and is already having an effect on prices, Popple says. The first phase of Tesla’s gigafactory is expected to be ready next year.

“All the major suppliers are positioning themselves for life after the Tesla factory and its bringing down prices for everyone,” he says.

The company has raised $55 million, $25 million of which was debt financing with Hercules Technology Growth Capital, as well as $30 million in equity from new and existing investors. The series 4 equity round was led by several new investors—some unnamed—including a family office, a sovereign fund from the Middle East, and early Tesla Motors and Palantir Technologies investors Mike Dorsey and Miriam Rivera. Existing investors include Kleiner Perkins, Tao Capital Partners, GM Ventures, and Constellation Energy.

The debt financing will be used to fund the company’s new factory in City of Industry, California. The factory, which will double Proterra’s production capacity, is expected to be operational by the end of 2015 and will employ 70 people. The factory is also funded by a $3 million grant awarded by the California Energy Commission in April 2014.

Proterra has 110 orders for its buses, which can cost up to $800,000 for customers that buy the battery packs and have the maximum battery configuration. Customers can buy a bus and lease the batteries for about $550,000. The 60 first generation buses have already been delivered and are on the road in Los Angeles and San Joaquin counties in California, as well as San Antionio, Texas, and Nashville, Tennessee. Another 50 of its 40-foot second-generation buses will be produced and delivered this year. The company can produce about one bus a week at its Greenville factory, Popple says. Seattle will be the next city to receive the second-generation bus. Lousiville, Kentucky, and Stockton, California are also slated to receive electric buses this year.

In all, Proterra has won awards for 400 units, although not all of those will turn into firm orders, Popple says.

“We’re just getting past our early adopters and now we’re entering into our early majority adoption,” Popple says. If the company stays on track, it will capture 1% of total new shipments to the municipal market in 2016.

The buses can be customized to suit each transit agency’s needs, including an extended range product line that can go up to 200 miles on a single charge.

He believes orders will only accelerate as battery prices continue to fall and as the company expands into the corporate fleet market this year. Proterra will focus its corporate fleet efforts on the Bay area first, Popple says. The company is targeting Fortune 500 companies, universities, and theme parks as potential clients.