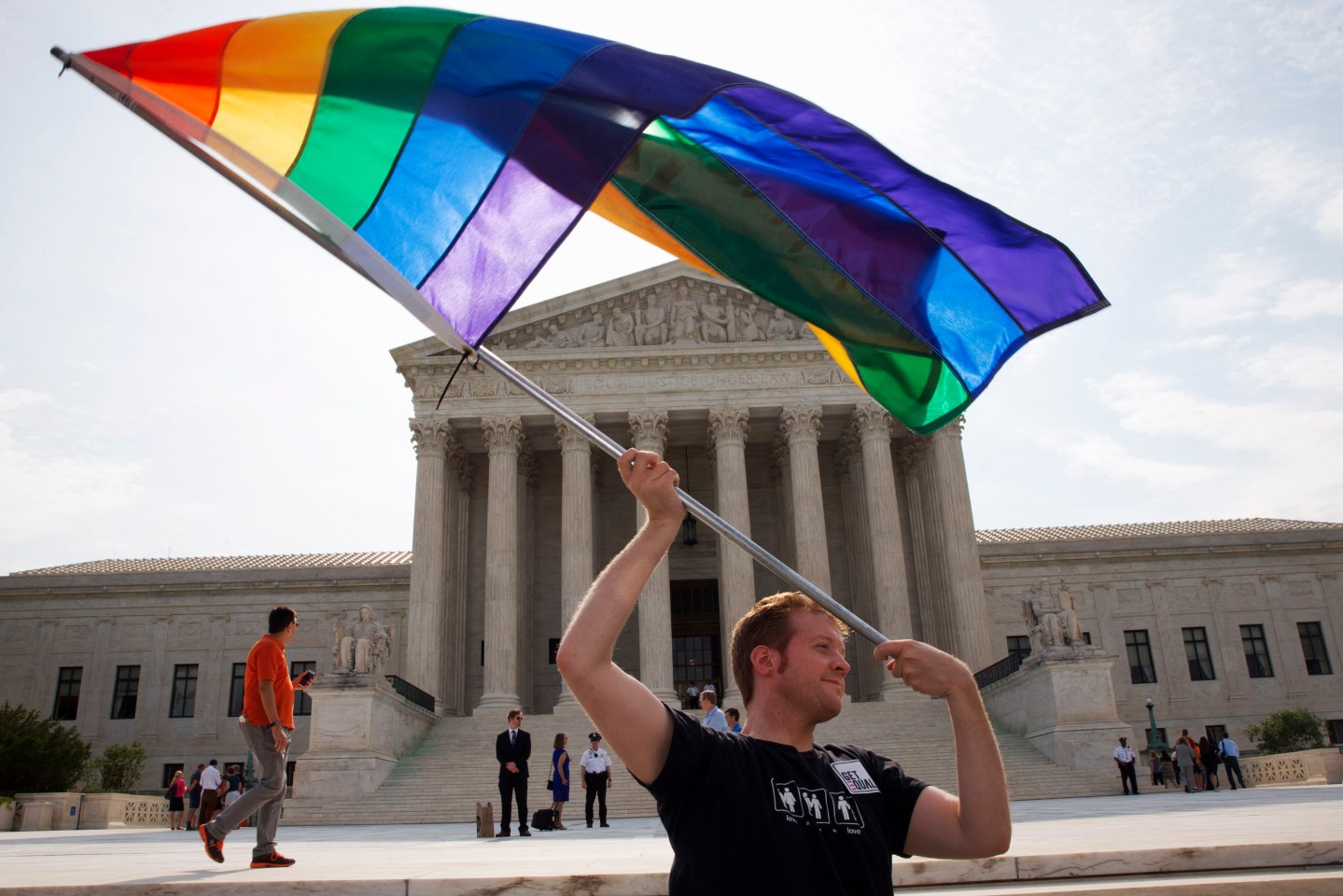 John Becker, 30, of Silver Spring, Md., waves a rainbow flag in support of gay marriage outside of the Supreme Court in Washington, Thursday June 25, 2015. The same-sex marriage ruling is among the remaining to be released before the term ends at the end of June. (AP Photo/Jacquelyn Martin)
Photograph by Jacquelyn Martin – AP

The Supreme Court ruled 5-4 in favor of legalizing gay marriage for all 50 states, the District of Columbia today, and U.S territories. And some of the biggest companies across the country are weighing in on the matter on social media. Here are a few:

Today marks a victory for equality, perseverance and love.

“The people who are crazy enough to think they can change the world are the ones who do.”

“We applaud the Supreme Court and everyone who worked so hard in the years leading up to today’s historic decision. This is a momentous step forward for equality and fundamental human rights in the United States. We could not be happier for our employees, customers and people all over America who now have the right to marry the one they love,” according to Apple in a statement.

Here's to having, holding and marrying who you love. #takepride #SCOTUSMarriage pic.twitter.com/8NLGee0Rl0

From this day forward… #loveislove pic.twitter.com/TrSHAl8mat

It is so ordered. #LoveWins pic.twitter.com/KV6mTddEkS

5 of these people rock. pic.twitter.com/GJhbop5E1o

We’re on board. Diversity strengthens us all & today we celebrate #MarriageEquality & the landmark #SCOTUS decision. pic.twitter.com/gqej2xMzIU

Meanwhile, the economic impact of same-sex marriage legalization is estimated in the billions over the next few years.

“There are 1.4 million LGBT business owners are the country – imagine how many more will come out now that the tide of equality has risen so hight,” a National Gay and Lesbian Chamber of Commerce spokesperson told Fortune in a statement. “But marriage is not the finish line; it’s the starting pistol. The 2014 buying power of LGBT America is $880 billion — the community’s loyalty can’t be overestimated.”