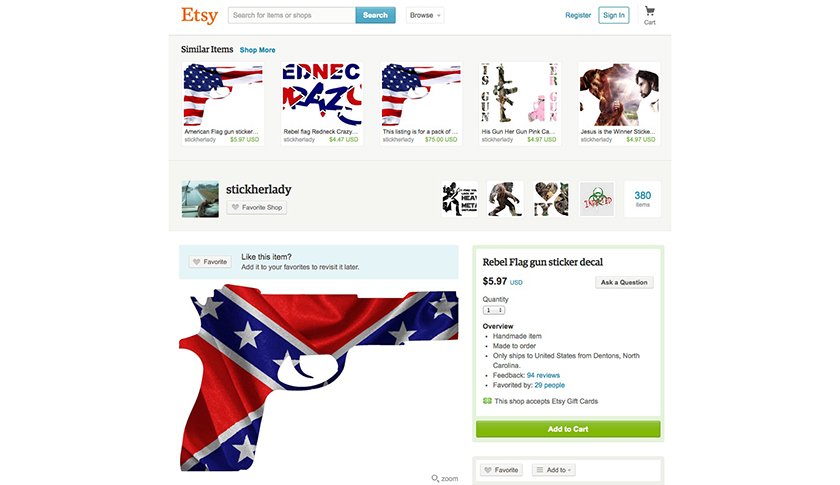 Apparently, Etsy now thinks Confederate flags are “inconsistent” with its values. Up until Tuesday afternoon, the online marketplace known for its artisan and handcrafted wares had 24 pages of items with images of the Southern separatist banner for sale on its website.

But, like other retailers in the wake of last week’s nine shooting deaths in a historic black church in Charleston, South Carolina, Etsy (ETSY) said on Tuesday that it would pull all of the Confederate flag merchandise on its website. Amazon and eBay also said on Tuesday that they would remove any merchandise that had the Confederate flag on it. That follows a number of large retailers, including Walmart, that have also removed the flags and items with images of the flags from their shelves.

The primary suspect in the shooting, Dylan Storm Roof, appeared in photos holding the Confederate flag. A number of high profile CEOs have said that the flag should be removed from the grounds of the South Carolina statehouse. The state’s governor, Nikki Haley, echoed that sentiment on Monday.

Etsy told Fortune that its website is “not a curated marketplace.” But it says that it does prohibit the sale of some merchandise, including items that “simply are not in the spirit of Etsy.” The company also says that it prohibits items that glorify hate groups, including the Klu Klux Klan. But it says it does allow items that have an “educational, historical, or artistic value.” Last September, the company banned the Redskin name and logo of the Washington, D.C. football team. At the time, Etsy said that it found “the opinion of the minority group itself to carry most weight in determining whether the mascot is disparaging.” Nonetheless, the company continued to sell Confederate flags, as well as this swastika guitar pick.

Many have long viewed the Confederate flag as a symbol of hatred. The NAACP this weekend staged rallies to call for the flag to be removed from South Carolina’s state capitol.

On Tuesday in a statement to Fortune, Etsy said, “With each new application of our policies, we strive to strike the right balance between creative freedom, Etsy’s values, and establishing a safe and respectful marketplace for members. The challenge of defining and eliminating offensive items raises deep and complex issues — both philosophical and pragmatic — which we at Etsy wrestle with regularly. We strive to think about our site holistically and determine what is best for the entire community.”

This is a magazine release cover emblazoned with the Confederate flag. The item's description says it adds "customized flare to your file."

It's for your neck.

According to the description from the seller, "All patches are made with pride in the USA."

A home for a Southern bird.