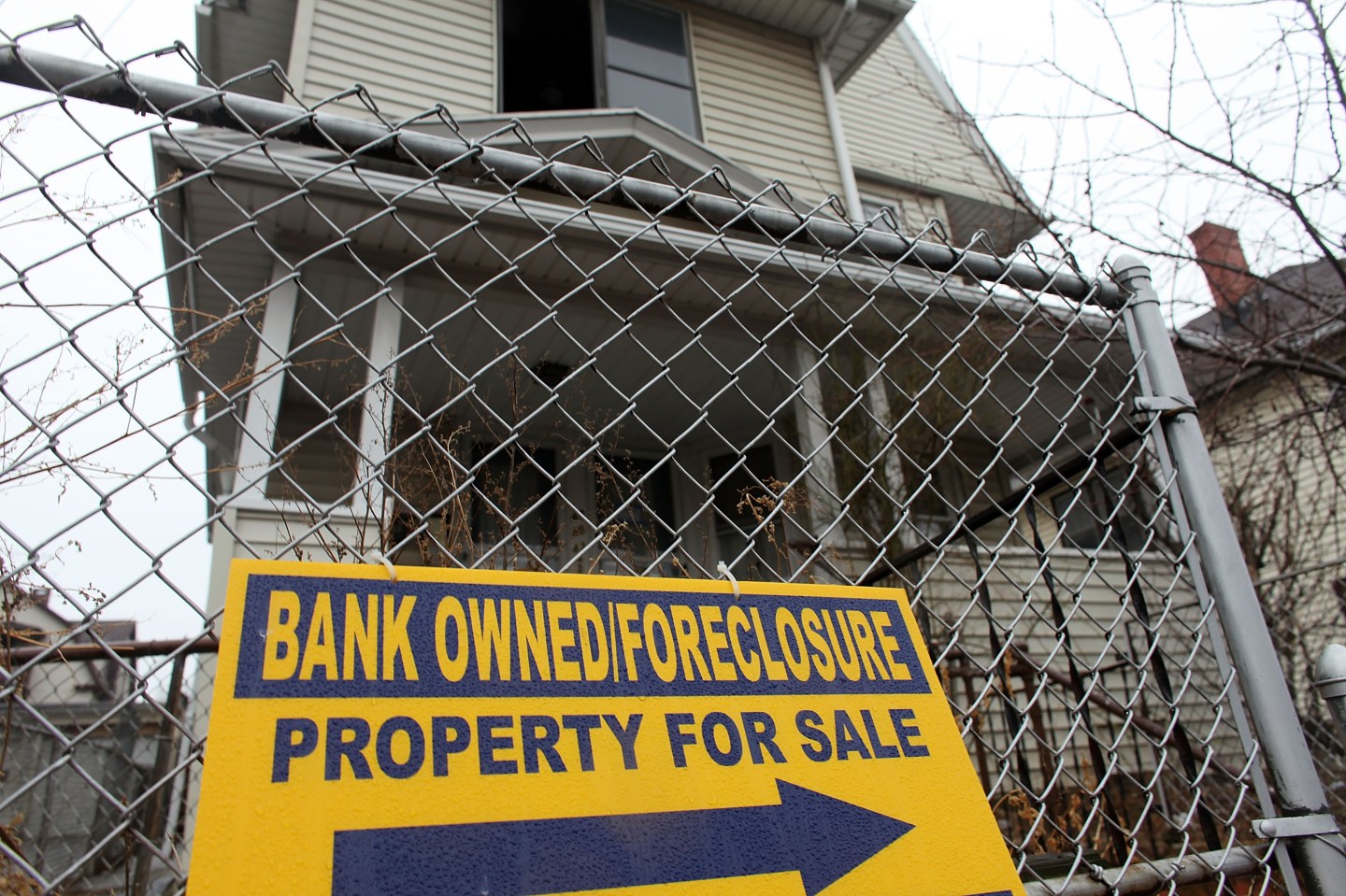 BRIDGEPORT, CT - MARCH 12: A sign is displayed in front of a foreclosed home on March 12, 2010 in Bridgeport, Connecticut. A new report by RealtyTrac Inc. announced that the number of foreclosed homes in Connecticut, one of the nation's wealthiest states, is up 3.4 percent from January to February of this year. Nationwide foreclosures have decreased by two percent from January to February. The report, which was released yesterday, says there were nearly 2,300 foreclosure filings in Connecticut last month, compared with nearly 2,200 in January. (Photo by Spencer Platt/Getty Images)
Photograph by Spencer Platt — Getty Images

In the years following the financial crisis, a cottage industry arose that tried to explain just what happened to the American economy and the financial system.

Early on in the process, journalists zeroed in on one set of villains: subprime lenders and the supposedly irresponsible borrowers who were their customers. We were regaled with stories of mortgage lenders like Countrywide handing out loans that borrowers couldn’t possibly repay, and then selling them on to investment banks, who packaged them into “toxic” bundles like Goldman Sachs’ infamous Abacus collateralized debt obligation.

When these subprime borrowers began to default, so the narrative goes, the dominoes began to fall, eventually helping to send the entire mortgage market, U.S. financial system, and global economy into crisis.

At the time, the press spent a lot of energy scrutinizing subprime borrowers and lenders, based on the fact that in the early days of the crisis, the rate and absolute number of subprime foreclosures were much higher than foreclosures in the prime market. It was around this time that CNBC’s Rick Santelli gave his famous rant against talk of bailing out underwater homeowners that helped launch the Tea Party movement, calling the folks who were at risk of foreclosure “losers.”

Furthermore, much of the reforms instituted since the financial crisis have centered around increasing scrutiny of mortgage lending, to make sure that these sorts of irresponsible loans aren’t made again.

But if journalism is the first-draft of history, then it’s about time for a second draft. In a new working paper by Wharton economists Fernando Ferreira and Joseph Gyourko, the authors argue that the idea that subprime lending triggered the crisis is misguided. The paper looks at foreclosure data from 1997 through 2012 and finds that while foreclosure activity started first in the subprime market, the foreclosure activity in the prime market quickly outnumbered the number of subprime foreclosures.

The following chart shows the total number of foreclosures and short sales per quarter in various classes of mortgages:

While subprime borrowers default at a higher rate than prime borrowers, Fierra said in an interview with Fortune that the data shown above suggest that the foreclosure crisis would have happened even in the absence of such risky lending. “People have this idea that subprime took over, but that’s far from the truth,” says Ferreira. The vast majority of mortgages in the U.S. were still given to prime borrowers, which means that the real estate bubble was a phenomenon fueled mostly by creditworthy borrowers buying and selling homes they simply thought wouldn’t ever decrease in value.

We can draw two conclusions from this data. One is that your chances of being foreclosed upon in the past decade was more a matter of timing than anything else. If you were a subprime borrower in, for instance 2002, who bought a bigger house than a more prudent and creditworthy borrower would have bought, chances are you would have been fine. But a prime borrower who did everything right—bought a house he could easily afford, with a large downpayment—but did so in 2006 would have had a higher chance of defaulting than the subprime borrower with better timing.

Since whether you were hurt by the crisis had more to do with luck than anything else, Ferreira argues we should rethink whether doing more to help underwater homeowners would have been a good idea.

The research also offers some sobering policy implications. Ferreira’s data show that even with strict limits on borrowing—say, requiring every borrower to put 20% down in all circumstances—wouldn’t have prevented the worst of the foreclosure crisis. “It’s really hard for certain regulations to stop the process [of a bubble forming],” Ferreira says. “I really wish my research had showed that it’s all about putting down 20% and all problems are solved, but the reality is more complicated than that.”

Furthermore, we still don’t have the tools to understand the cycles of real estate prices, or to recognize bubbles, in any asset class, before they form. So it would be a mistake to think that any regulatory reform will offer fool-proof protection against the next financial crisis.

The booms that capitalism confers on us, it seems, will inevitably be followed by busts.