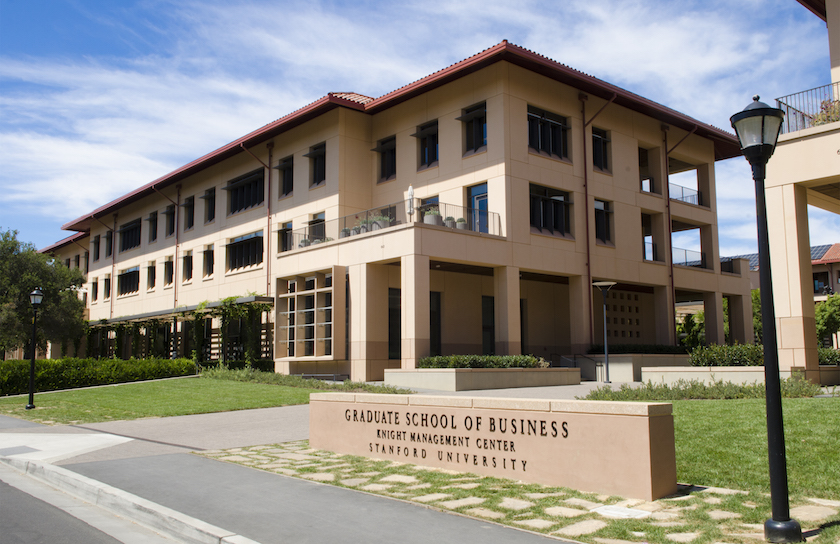 (Poets&Quants) — Every year, the world’s top business schools engage in an all-out talent war for the best MBA applicants on the market. To coax the most desirable prospects to their campuses, they’ve employed alumni to serve as ambassadors, touted their programs and faculty, and used millions of dollars in scholarship money.

So, who’s winning the MBA student talent wars? A new survey of MBA admission consultants by Poets&Quants finds some very familiar business schools at the top, with some real surprises sprinkled throughout the list. Stanford University’s Graduate School of Business ekes out a slight win over Harvard Business School, while the University of Pennsylvania’s Wharton School is solidly third.

Perhaps more surprising is that admission consultants believe that two non-U.S. business schools, INSEAD and London Business School, are among the top 10 in the world for landing the best candidates in the MBA applicant pool. In fact, INSEAD comes in fourth, just ahead of the University of Chicago’s Booth School of Business and Northwestern University’s Kellogg School of Management. London Business School is tied for eighth with Dartmouth College’s Tuck School of Business. Rounding out the top 10 are Columbia Business School, which placed seventh, and MIT Sloan, which came in tenth.

The findings offer a unique, never-before-seen look at the student talent wars. Aside from admission officials, MBA admissions consultants are in the best position to assess the total candidate, and they typically see a quarter to a third of the applicant pool of the Top 10 business schools. Some rankings measure student quality using average GMAT scores or undergraduate GPAs. But those numbers take a very limited view of quality. They fail to take into account where candidates earned their degrees, where they worked, what they did, what progress they made in their jobs, what leadership challenges they overcome, and how articulate and thoughtful they are.

In effect, we asked admission consultants to take a holistic view of their clients in answering this simple question: “To which schools have you seen your highest quality clients enroll over the years?” We then asked the consultants to rate the top 25 U.S. business schools and the top 10 non-U.S. schools on a scale of one-to-five, with five representing schools that enrolled the highest quality students.

The survey was sent in May to 50 leading MBA admission consultants at the world’s top firms and boutiques. Some 35 of the 50 consulting firms completed Poets&Quants’ survey, for a response rate of 70%. Altogether, the survey respondents—many of them former business school admissions officials themselves—have accumulated well over 400 years of admissions consulting experience and helped more than 65,000 applicants get into the world’s best MBA programs.

The survey’s limitations are obvious. We only asked for consultants’ views of 35 schools, already a highly selective group of MBA programs that are generally recognized as the best in the world. These schools, no matter where they rank on this list, are solidly in the top 1% of all providers of graduate business education. Secondly, the ranking is not reflective of the quality of the MBA experience, the faculty, the alumni network, or even such basic career outcomes as starting salaries and employment—all important aspects of a world-class MBA program. Instead, the ranking merely measures which schools are successfully and consistently getting the best and brightest student talent, from the perspective of admissions consultants.

Stanford’s No. 1 showing is largely attributed to the increased interest in entrepreneurship and technology as well as the school’s highly selective acceptance rate of only 7.1%, versus 11.0% at Harvard. Because Stanford only has to fill 410 seats, less than half the 935 at HBS, consultants say it is more likely to win the MBA talent war overall. That’s despite the fact that Harvard boasts considerably greater resources than Stanford, more faculty, including far more star professors, a wider portfolio of courses, and a much larger and more global alumni network, including significantly more corporate CEOs.

The fact that it topped HBS, even ever so slightly, was not an unexpected outcome.

“I’m not surprised to see [Stanford] GSB top HBS on this list, just because Stanford seems to be edging Harvard on most lists,” says Adam Hoff, a principal with Amerasia Consulting Group. “We’re in a world that seems to turn on the wheel of Silicon Valley, a focus on social impact, a brogues and chinos vibe over suits and wing tips. I know that among my clients who got into both, most choose Stanford. That said, I still have far more people who go into this process with HBS as their top choice and who don’t even apply to Stanford than I do the opposite.”

And at least one consultant attributed Stanford’s success to its admissions practices. “When Stanford makes an offer, not only does [MBA Admissions Director] Derrick [Bolton] make the calls personally and starts selling the school, they almost immediately engage alumni in the candidate’s industry and/or location to start selling the candidate on the benefits of choosing GSB over HBS,” says Chris Aitken, co-founder of MBA Prep School. “I don’t think HBS gives the impression of working as hard to win top tier candidates over.”

The real surprise may well be INSEAD’s showing above many so-called M7 schools, generally thought to have the best MBA programs in the world. The school, with campuses in Fontainebleau, France, and Singapore, has an acceptance rate (estimated at just above 30%) that is well above rivals and an average GMAT score for its incoming class that, at 701, is below 14 U.S. MBA programs. But INSEAD’s more global makeup and its shorter one-year program has appeal to many of the best candidates in the applicant pool.

Hoff of Amerasia also believes INSEAD gets better candidates by having a robust set of essay questions and requiring candidates to go through two interviews. “The school gets better candidates by asking them to complete a tough application process,” he insists. “You get what you pay for. U.S. schools would be wise to stop pandering to this supposed Twitter generation and go back to tougher apps. They will not only get a better sense of what they have, but they will be signaling that getting into their school is no joke. I know for a fact that some of my clients come through this process thinking of INSEAD as more legitimate than counterpart schools simply because it was such a robust application process.”

The survey results also reflect, to some degree, the general reputations of the schools and how they rank on various lists. Typically, says Dan Bauer, founder and CEO of The MBA Exchange, the best applicants are deciding on which schools to attend based on “a school’s relative ranking, fit between curriculum and post-MBA career goals, appeal of campus culture, offers of merit-based aid, and geographic location.”

The very best MBA applicants may also factor in other things in making their choice. “Schools that are more popular with applicants as a whole, and [with] top applicants in particular, are going to be the ones that admissions consultants’ top quality candidates enroll in,” contends Adam Markus, a veteran MBA consultant. “For U.S. schools, Harvard, Stanford, and Wharton are clearly at the top and the others are listed reasonably well in first choice ranking. Stanford is slightly ahead of HBS because Stanford takes a much narrower band of high quality applicants than HBS does.”

Markus also believes that many of the best candidates heavily factor into their decisions the opportunity cost of attending an MBA program. “In general,” he says, “higher quality candidates have much greater opportunity costs for stopping work for one to two years to go get an MBA and will consider a relatively narrow range of programs.

“I have some high quality clients who only apply to HBS and Stanford and would consider even Wharton an unacceptable compromise. I have some candidates who will add Wharton to the list, but that is about it.”

Matt Symonds, a partner at Fortuna Admissions, says that the applicant pools at the top three schools—Stanford, Harvard and Wharton—are so deep and rich that it’s often hard to discern a significant difference in candidate quality at many other highly selective MBA programs. “For every applicant that secured a place at [Stanford] GSB, Harvard, or Wharton, there were no doubt two or three other applicants of equal quality that did not make the cut because the admissions office was trying to put together a diverse class,” adds Symonds. “There are only so many McKinsey, Google, World Bank, Gates Foundation, or boutique private equity profiles each school will admit, and those applicants may land a place at Haas, Kellogg, or Tuck. So the margins are very thin.”