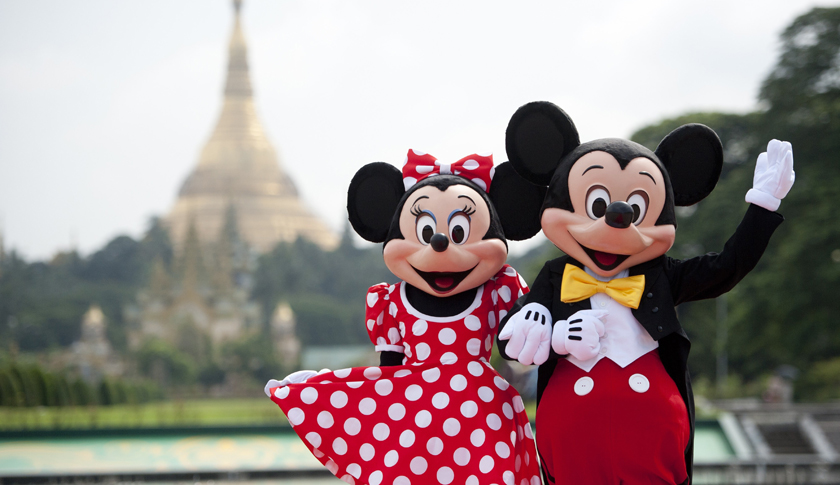 Walt Disney characters Mickey Mouse (R) and Minnie Mouse pose for photographs in front of the Shwedagon Pagoda in Yangon on September 25, 2014. The Disney characters, icons of the US entertainment industry, were making their debut in Myanmar, which has emerged from being a highly reclusive state. AFP PHOTO / Ye Aung THU (Photo credit should read Ye Aung Thu/AFP/Getty Images)
Photograph by Ye Aung Thu — AFP/Getty Images

Working at a Disney Park may be magical, but apparently the “cast members” — as these Disney employees are called — aren’t allowed to tell anyone what loveable character they play — at least for now.

The union that represents Disney (DIS) Park employees is challenging the rule, which doesn’t allow workers to say which character they play in any online or print media — this is likely a bigger issue today given the proliferation of social media.

A representative for the Teamsters, the union representing the workers, thinks this is extreme, telling the Orlando Sentinel that the person playing Tigger doesn’t “work for the CIA.”

Dalton told the newspaper that the Teamsters filed a grievance with Disney’s labor relations department last week. The union will also file an unfair labor practice charge with the National Labor Relations Board, she added.

MORE: Check out Disney on the new Fortune 500 list

More than 1,200 Disney workers greet guests or appear in parades in various guises, including dressed as “fur characters,” such as Winnie the Pooh, or in outfits that cover the performers completely, and “face characters” such as Snow White or Cinderella, Dalton told the paper.