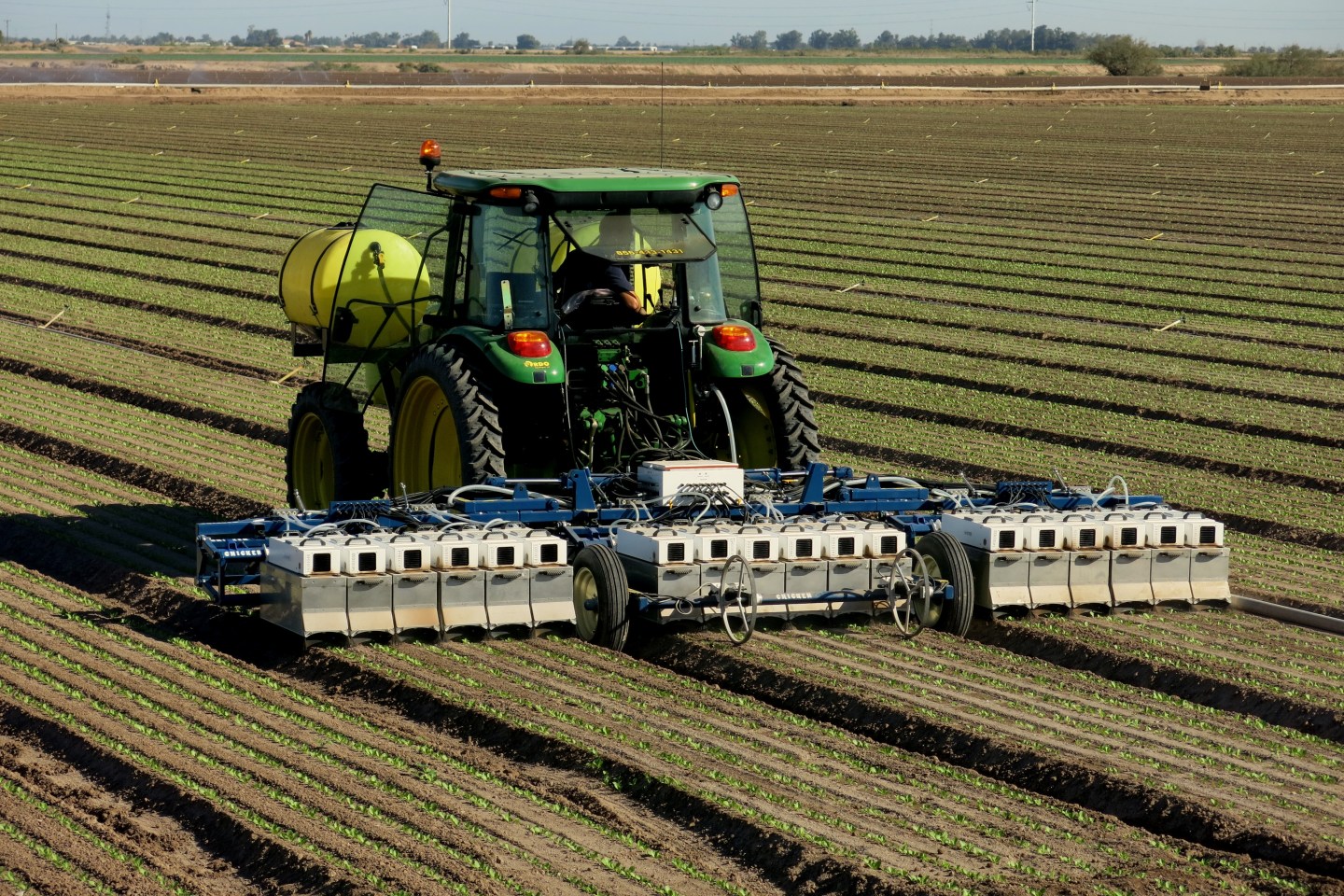 Blue River Technology — the startup that brought weed-killing lettuce robots to farms around California — quietly launched a 3D crop scanning tool last month in order to be ready for this year’s farming season, Blue River Technology CEO Jorge Heraud told Fortune. The tool, called Zea, has been under development for a year and a half, and like the lettuce robot, uses computer-based vision to scan farm fields and gather data about crops.

Blue River Technology is starting out by selling its 3D crop scanning tool as a service to corn plant breeders (with a fee per acre) who are keenly interested in gathering information about crops grown from various seeds in field trials. The breeders want to measure attributes of the crops such as the size of leaves, the effect of drought on plants, and how quickly crops are growing.

Evaluating crop breeding field trials is currently a tedious task that is mostly done manually by breeders walking down fields with analog tools, such as rulers. Fields sometimes need to be scanned multiple times to determine how quickly crops are growing.

The company’s initial corn breeder customers are mostly working in the midwest’s corn belt, but Blue River is also working with farms in California to gather data about trials for drought-tolerant crops. Universities are interested in using Zea for crop genetic research as well, says Heraud. Down the road, the four-year-old startup plans to sell the machines themselves to breeders.

The 3D crop scanner is a natural extension of the initial lettuce bot product. “When big industries start to have new tools like computer imaging, the rules and the game change,” says Heraud, a former executive with positioning company Trimble. He adds “agriculture is in the middle of a revolution.”

The company’s lettuce robot — which scans a field using computer vision and douses just the weeds with deadly fertilizer — seems to be gaining traction in the market. Heraud says that 5 percent of the lettuce produced in the U.S. has been grown in California and Arizona using Blue River lettuce robots. “If you’ve eaten lettuce over the last few months, odds are the lettuce has been scanned by the lettucebot,” says Heraud.

The lettuce bot, which is in its fourth generation, can boost the yield of farms by 10% and can reduce operation costs by replacing human labor. Manually spraying and pulling weeds on a lettuce farms is a difficult job.

The Zea data scanner isn’t Blue River’s only new product coming to market. Next year Blue River hopes to deliver a prototype of a weed-killing robot that can operate in a similar way to its lettuce bot but for other crop types. “For the majority of farmers, weeds are not dying anymore. It’s an industry in crisis,” says Heraud. The idea would be to very selectively deliver fertilizer, chemicals or herbicides in ways that kill weeds only, but not the plants. Different substances would be needed for different crops.

The company is funded by Data Collective Venture Capital, Khosla Ventures, Eric Schmidt’s Innovation Endeavors, Steve Blank, Ulu Ventures, and Stanford Angels. The company closed on a $3.1 million seed round in 2012, and a $10 million round in 2014.