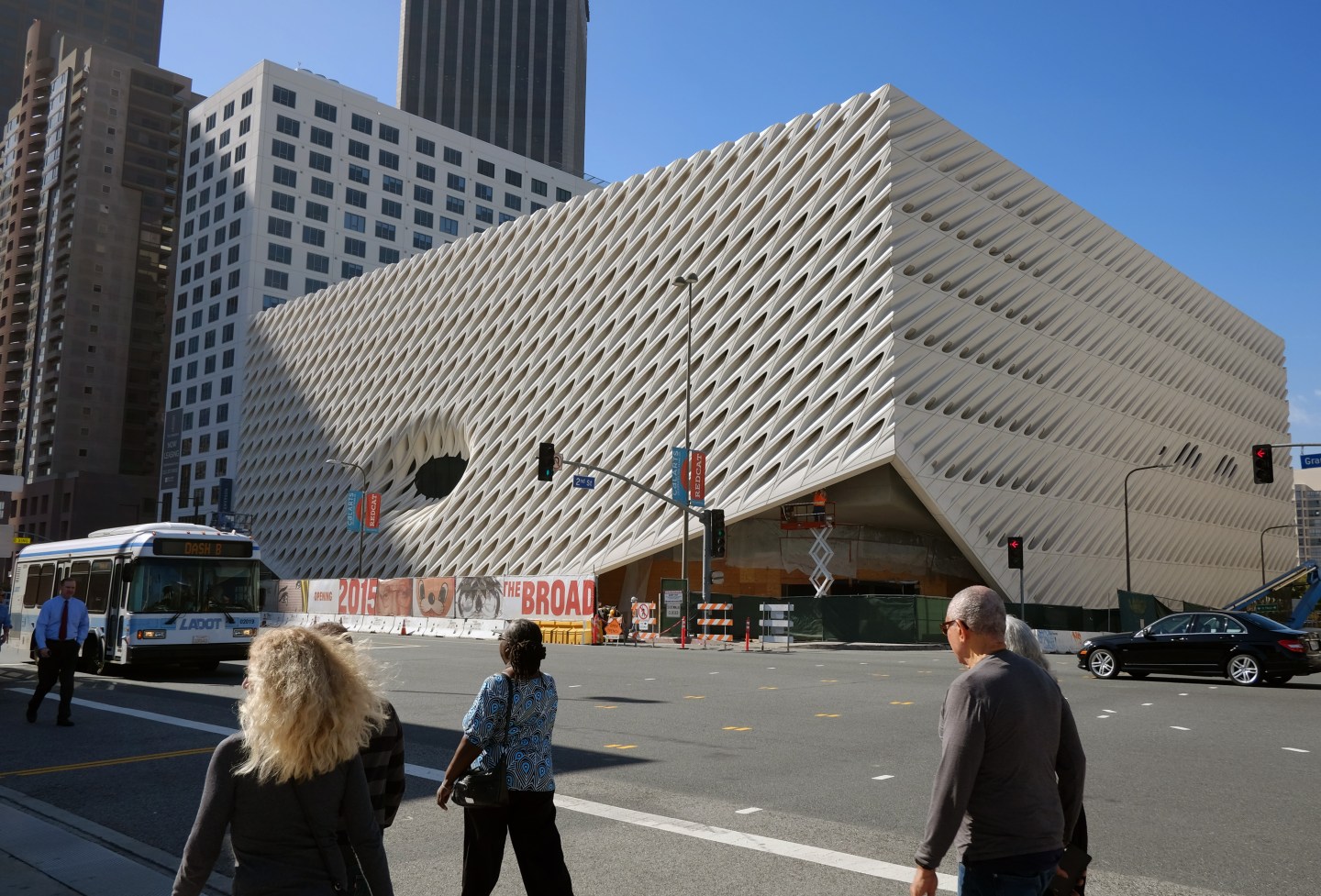 Pedestrians walk past the construction site of the Broad Museum on Thursday, Feb. 5, 2015 in downtown Los Angeles. The new contemporary art museum that will be free to visitors, is set to open Sept. 20. Museum officials on Thursday, Feb. 5, 2015 announced the opening date for the block-long, three-story building next door to the Walt Disney Concert Hall. The $140 million institution will showcase the priceless collection of billionaire philanthropist Eli Broad. Among the artists whose work will be displayed are Andy Warhol, Jasper Johns, Ed Ruscha, Cindy Sherman, and Roy Lichtenstein. (AP Photo/Richard Vogel)
Photograph by Richard Vogel — AP

When The Broad contemporary art museum opens its doors this fall in Los Angeles, it will join the ranks of America’s big free museums, reviving a frequent refrain: Why aren’t they all free?

In the case of The Broad, it’s almost entirely philanthropy supporting the bottom line.

It’s a “gift to the people of Los Angeles,” said Eli Broad, who along with his wife, Edythe, provided more than $200 million for the museum. “They felt strongly that free admission was the best way to make great works of contemporary art accessible to all,” said a spokesman for the couple, who own works by Roy Lichtenstein, Andy Warhol, Jean-Michel Basquiat and Cindy Sherman.

The Broads are also longtime supporters of the Los Angeles County Museum of Art, which is one of three museums that received a $450,000 federal grant to explore a new business model that has already allowed the Dallas Museum of Art to go mostly free.

It’s one way museums are adapting to the popular perception that art should be free, despite the fact that public financing has been declining while museum attendance is climbing.

With the help of its own multi-year grant, the Dallas Museum of Art eliminated its $10 general admission — while still charging for special exhibitions — and saw annual attendance jump to 668,000 from 498,000. It also offered free memberships, now up to 100,000, and emphasizes audience engagement. “Now we know who they are. That data is worth a lot more,” Maxwell Anderson, director of the Dallas Museum of Art, told Fortune.

The museum has seen a 29% increase in minorities visitors. Latinos alone now account for 26% of the museum’s audience. The new members’ favorite work of art is John Hernandez’s 1992 “HI-C Avenger” and the most popular badge is “ringleader,” awarded when a DMA Friend brings three people to the museum.

Once a museum goes free, it’s hard to go back. That’s the case at the Bronx Museum of the Arts in New York City, which is nearing the end of a three-year grant that allowed it to drop its $5 admission and see its attendance rise to 80,000 from 30,000. When the grant expires, there will be a $250,000 hole in the budget unless they find another donor, said Jose Ortiz, the Bronx Museum’s deputy director.

Not all museums can find a way to survive as free, said John Robinette, senior vice president of economics at AECOM, a global infrastructure company that also works with museums. One example often held up as a model of free are national museums in the United Kingdom, but as Robinette pointed out, the government ordered them to go free in 2001, but financially “they didn’t get what they needed” to make up the difference. Alistair Brown, the policy officer for the Museums Association in London, said the switch to free admission saw attendance rise 150 percent but many lost up to 40 percent of their government funding. Some were then criticized for accepting sponsorships from oil companies. Regional museums have been harder pressed and about 40 have closed in the past 5 years, he said.

Back in the United States, only a few have re-instituted admission fees. In 2006, the Art Institute of Chicago faced public criticism when it changed its suggested $12 adult admission to mandatory. (It’s now $23, or $33 with a fast-pass to skip the lines.)

The most recent to change in course was the Indianapolis Museum of Art, which on April 7 added an $18 general admission and aims to increase revenue by 17 percent this year, Matthew Gutwein, the museum board’s vice chair said last week. But the new policy comes with its own costs, including community resistance. “I just feel like this is putting a barrier between the common man and the art museum,” Nancy Stone said at an Indianapolis town hall, as reported by WTTV. “I don’t want it to be a fortress. I want it to be accessible to everyone.”