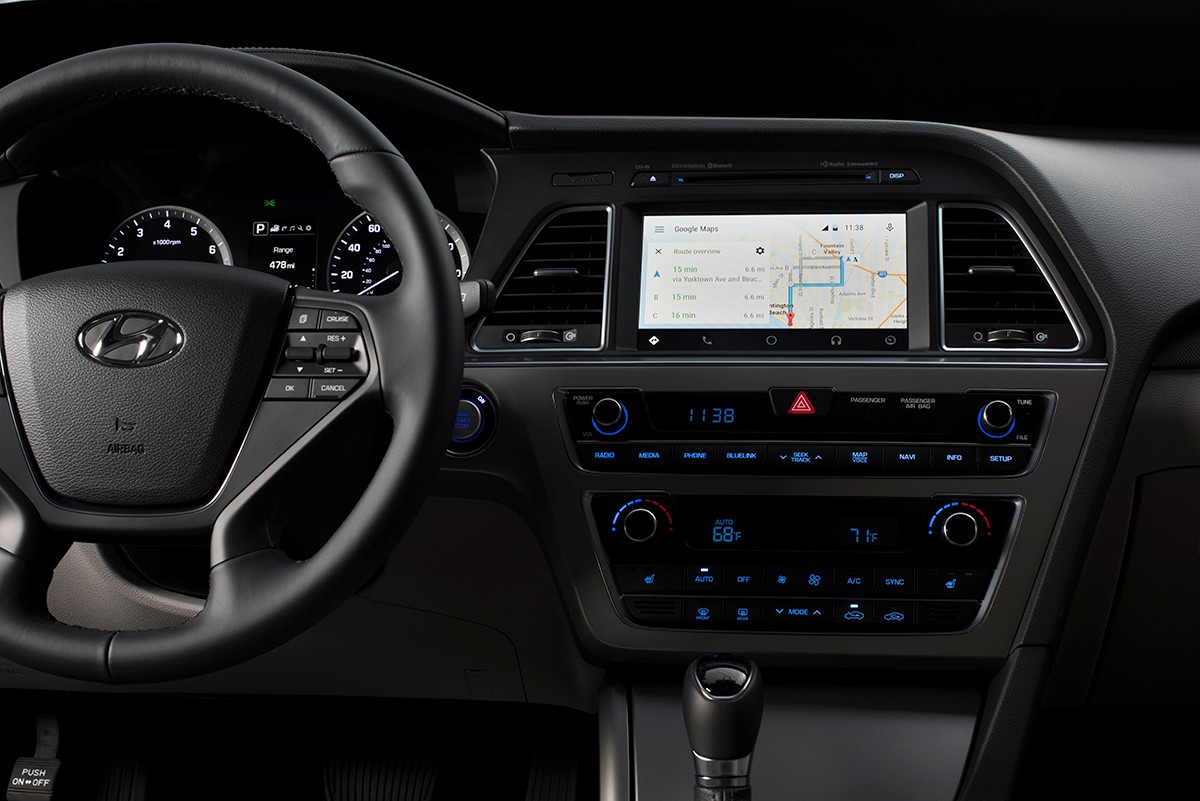 Android Auto in the 2015 Hyundai Sonata

The next platform battle has begun and it’s being waged inside the car.

This week, GM’s Chevrolet and Hyundai announced plans to add technologies that will deliver smartphone functionality to the dashboard of new cars. On Wednesday, Chevrolet said it would offer both Apple CarPlay and Android Auto compatibility in 14 models, including the 2016 Cruze compact car that will debut June 24. A day earlier, the 2015 Hyundai Sonata became the first car to include Google’s new in-car voice-enabled software Android Auto.

Both platforms have the same mission to integrate the smartphone with the vehicle’s dashboard. Android Auto connects to Android smartphones, while CarPlay works with the iPhone. And they work about the same way. Once users plug their smartphone into the car’s USB port, the phone’s maps and navigation, music and selected apps are integrated onto the central screen. Both have similar features with a few notable differences—CarPlay users can only use Apple maps.

Applications in both platforms can be controlled by voice, steering wheel controls, and touchscreen and they’ll also will offer third-party audio apps, including iHeartRadio and Spotify. Google (GOOG) and Apple have even partnered with many of the same automakers, including Audi, GM (GM), Kia and Ford (F).

Apple (AAPL) and Google’s battle over the connected car has been building up for a couple of years now. Apple introduced iOS in the Car—the in-car standard that would eventually be renamed CarPlay—during the Apple Worldwide Developers Conference in 2013.

The fight to become the dominant in-car platform presents a challenge for Google and Apple. Both companies want to further entrench themselves in consumers’ lives, possibly through exclusive partnerships with automakers. But it’s in the best interest of automakers to offer both platforms to its customers.

With the exception of a few automakers such as Tesla Motors (TSLA), the digital console of the car where drivers control A/C, music, and navigation can have a decidedly old-school feel when compared to the functionality and look of a smartphone. The touchscreen in many cars can be finicky and hard to use, forcing many drivers to use their smartphone for navigation or music.

CarPlay and Android Auto allow drivers to bypass the dashboards found in most cars—a capability that will become increasingly important as car-sharing grows. Drivers can instantly access their own music and navigational settings in a strange car by connecting to the Android Auto or CarPlay platforms.

The platforms can also help keep drivers eyes on the road—or at least out of their laps. Some 660,000 drivers, at any given daylight moment across America, are using cell phones or manipulating electronic devices while driving, according to the latest figures from the National Highway Traffic Safety Administration.

At least initially, the connected car field will be dominated by MirrorLink, appearing in 1.1 million cars this year, according to an IHS Automotive report released last month. Apple CarPlay will be in 861,000 new cars and Google’s Android Auto will be in 643,000 new cars this year. Apple and Google will quickly surpass MirrorLink, appearing in 37 million and 31 million cars by 2020, respectively.