Why Yahoo is so misunderstood 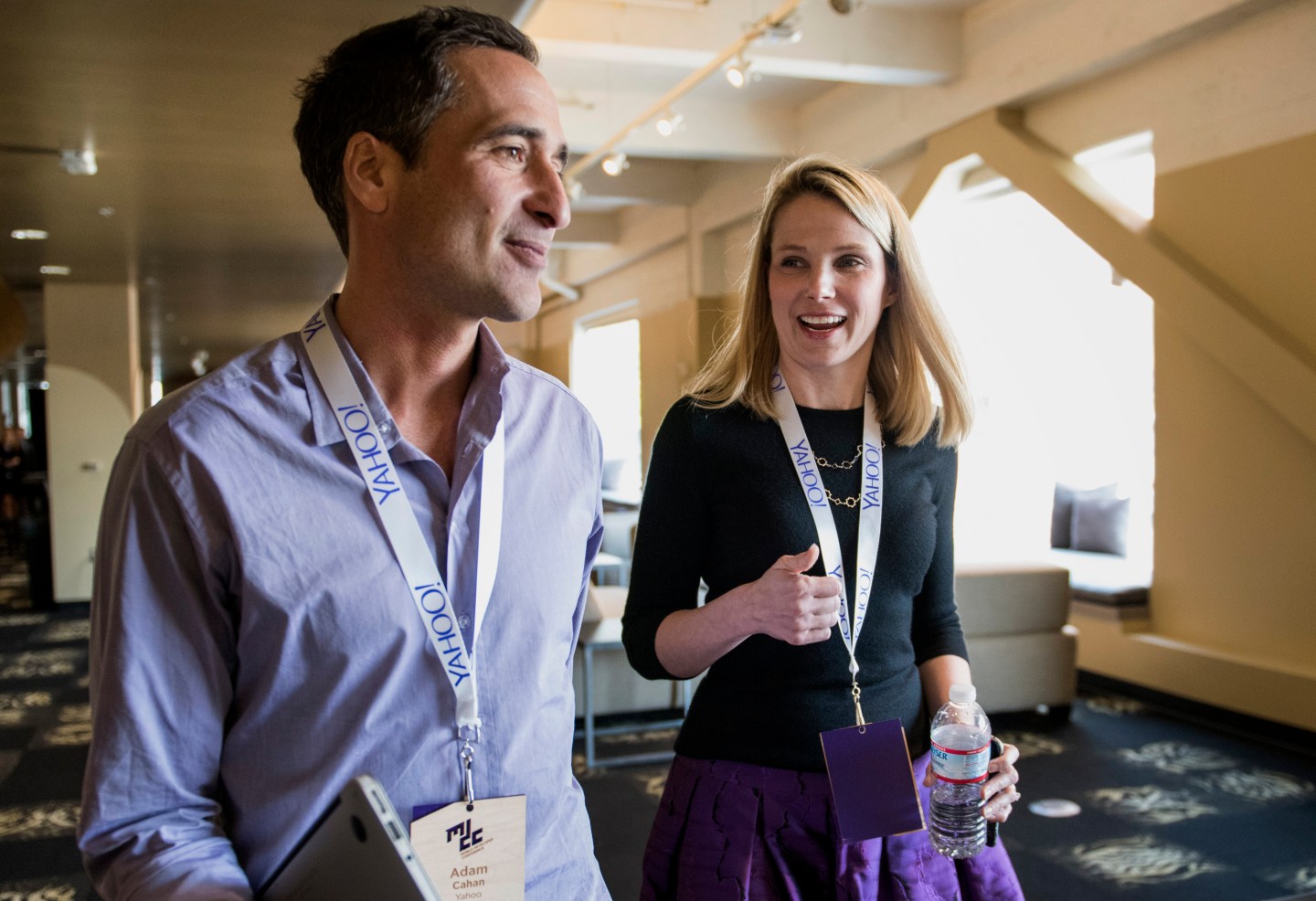 Around the same time, CEO Marissa Mayer shook up her product team, moving Adam Cahan, her righthand-man in charge of mobile, to lead video. Fortune spoke with Cahan to discuss the move and Yahoo’s plans for video, fantasy football, and winning over Wall Street, in a recent interview.

Fortune: Tell me about your plans for Yahoo video.

Cahan: By way of analogy, it’s similar to what happened in mobile. About two and a half years ago, Marissa said, “Hey, big platform shift coming to mobile. What do we do?” There were about 50 people in a company of 13,000 working on mobile. It was like a hobbyist culture. So we centralized mobile and I started to actually focus on scaling and building a team to focus on mobile. The consequence of that was we started shipping a lot of products.

We grew from 100 million users to 600 million users. We grew a business that was in the tens of millions of dollars in revenue to over $1.2 billion. We really rapidly scaled and took advantage of that platform shift.

Within the MaVeNS group [Yahoo’s term for mobile, video, native advertising and social], we felt like we knew where we were going with mobile. With native, we invested and made a big bet in [advertising platform] Gemini. With social, we have Tumblr. We started asking, “Where are we in video?”

Much to the same way mobile felt two and a half years ago, we’re at that same spot with video. So we’re going to reimagine it and restart it right now.

One flavor of it that we’ve started to see come to life is the notion of live video. We did an experiment with LiveNation—a concert a day—and we were able to scale that, but we found that about 43% of our users were new to Yahoo. So we followed that up this year with a live game show experience around DJ-ing with EDM. The music genre combined with live and Simon Cowell could be an interesting opportunity. My focus there is, “Can we build a live community based experience around music and how far can we scale that?”

I wouldn’t describe it that way because really, what’s going to matter in that genre is the community and product-based experiences.

You mentioned growing mobile from a $10 million to a $1.2 billion business. Since you’re a product person, how much of that is due to the product versus just executing on the ad sales side?

There are two dimensions to that. The first is we’re always user-focused. What are we solving for users? Because if we don’t solve for users, there is nothing there. How do we bring value to their daily lives? Once we start to solve that, you get to scale and that’s what the advertisers want.

The next thing you have to solve is the right ad experience for that. One of the biggest bets we made for mobile that worked out was native. Bringing the desktop ad metaphors to a mobile device was fundamentally broke and the ads sucked. You took a banner ad and you shrunk it down to a little skinny thing on the page and it was like an asteroid. The users hated it, the advertiser hated it, and it sucked.

So we reimagined that. One of the ad formats that has worked really well is search. Search is the first native ad ever. And we said, “What if we applied that thinking to mobile?” and so we started Gemini, our native ad play, and its worked phenomenally.

When are you going to put native ads inside the fantasy football apps? The adds I get in Yahoo’s fantasy app are basically the “sucky” banner ads you’re talking about. And that’s your most powerful app.

Yes, but only because my friends do. I don’t actually follow football.

Ah. So, the ads there tend to be from the same system. The area I’m actually very excited about we shared in the last earnings call—we’re doing daily [fantasy football].

Your experience is exactly right, which is, “I’m there because I like to play with my friends.” Right now, daily is more like sharks, and you’re not really playing with your friends, you’re playing in this pool. The question is, “Can we make it more about your friends?” And I think there’s an opportunity there because during football [season], we’re in the tens of billions of minutes. You’re talking about a pretty deep, engaging game.

So platforms like FanDuel and DraftKings are too serious? It sounds like you’re talking about a more casual experience.

I think there are elements around the friendship circle. The people you really want to play with as well as the notion of how we think daily works are a little bit different. You’ll see in a couple of months.

You’re not in charge of Mail or Flickr anymore. Is this a demotion for you?

No, not at all. When we created the mobile center, we basically said, “Let’s centralize everything so that we can get to scale.” At the time, Marissa said, “We’re going to be a mobile-first company.” I said to her, “If we’re a mobile-first company, we shouldn’t be centralizing it. It should be everyone’s job, right?” What we were trying to solve for was scale because we had nobody. We said would revisit it every year and decide whether it should be centralized or not. This was the first year we said, “You know what, it shouldn’t be centralized.”

We’re seeing crossover on all of our mobile experiences. Mobile engagement is higher than desktop engagement in pretty much all of our verticals. So by definition, we have become a mobile- first company in many areas. Now is the right time to put them back with their desktop counterparts so it’s an end-to-end experience.

When we looked at video, we started to see a similar challenge. Right now Yahoo’s video efforts are decentralized and scattered to the wind with not a lot of scale. So it’s the same thesis: Let’s do another startup. Let’s build again. And that’s been the highlight of my career. So it’s starting again, day zero. And it feels exactly like it feels two and a half years ago. I wish it was a demotion!

A lot of the CEOs at the companies Yahoo acquired have left. What are you doing to keep talent energized and is this a problem you’ve addressed or are concerned about?

One challenge when we said we want to be a mobile-first company was we didn’t have the technical capabilities. Marissa said, “We need to start a revolution here, and we need to make bets on the technology and we need to build teams that are capable of doing that.” So we used talent acquisitions as one of the ways to scale up. We acquired 40 companies, tons of small, extremely talented teams but maybe their product-market fit was not right. We used that to our advantage.

The minute you show up, not only are you focused on shipping product, but you have to hire. Go find your friends, go hire. We went from 50 to 500 developers. If you look overall whether that strategy has been successful, it’s been massively successful.

Do you think there will ever be a time when Yahoo is not playing defense to Wall Street?

One thing a lot of people didn’t notice on our most recent earnings is a few areas that are really growth-oriented. The mobile story—we went from no business to a $1.2 billion business. We built a business that basically did not exist. We know we have this steady and slow declining traditional display business. But we have these growth businesses within the company. And at some point that’s going to surpass that decline and the growth is going to return. And right now it’s hard to see that from the outside, but literally there are massive, billion-dollar startups inside of Yahoo.

Well, you bought one of those.

Tumblr is one of those areas where, if you look at the engagement and the demographic, it’s doing phenomenally well.

We spent a lot of time talking about Alibaba. As an internal operator, that’s not something I can impact. The dialogue has changed because people aren’t talking about that anymore. They’re talking about our business and that’s actually kind of nice to see. The results of the things we’re working on—like [our search deal] with Microsoft is very big news. As a company, when we start making those bigger bets, it’s been a much better time to talk about it than when all anyone cared about was Alibaba.

But even in the last earnings report, it felt like all people cared about was Yahoo Japan. More financial news. Why do you think Wall Street isn’t picking up on the growth story you’re telling me now?

Part of it is because it’s masked. It’s the notion of two countervailing principles happening at once. You have a growth engine inside and a traditional declining business. With the top-line number it’s hard to read the difference. In our last earnings we showed GAAP revenue growth, so you can see we are growing and it’s starting to come. We’re in a sector that is growing. We should be a growth company and that’s where our energies are focused.