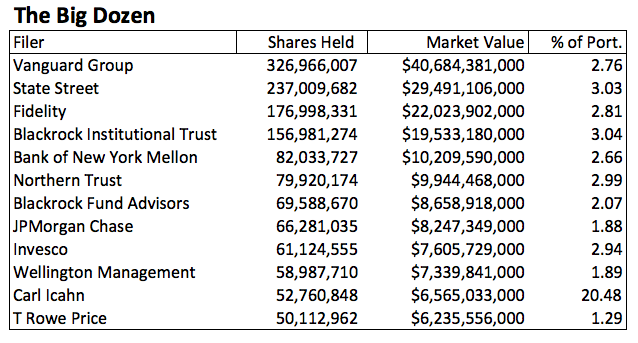 For 361 days of the year, hedge funds are black holes — invisible to the public. But once every three months, 45 days after the end of the quarter, they are required by the Securities Exchange Commission to disclose any changes in their holdings in a so-called Form 13f.

The 13fs for the first quarter of 2015 (Apple’s Q2) came in Friday, and according to Whale Wisdom‘s Daniel Collins, Apple topped the list once again — both in terms of the number of firms holding the stock (2,193) and in the value of their holdings ($421 billion).

Apple closed the quarter at an adjusted share price of $123.91, up 6.6%, but the aggregate number of shares held by firms with over $100,000 in management actually fell 4% — in part because Apple was once again in the market aggressively buying up its own stock.

Overall, according to Collins’ summary:

Drilling down a bit, here are last quarter’s 12 biggest buyers and 12 biggest sellers: