What was Tim Cook doing in China this week? 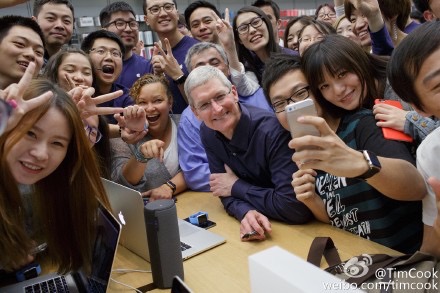 Tim Cook had serious business this week in China. He bought a million acres of Chinese forest. He met with Vice Premier Liu Yandong. He had high-level discussions about scientific and educational cooperation, whatever that means.

He also had some fun, judging from the Weibo account he opened on Monday and which by Saturday had drawn nearly 600,000 followers.

Weibo is China’s leading social network — a homegrown combination of Twitter and Facebook — and Cook used his new account to document public appearances at several schools and Apple Stores. It was a kind of victory tour, after a quarter in which iPhone sales in China finally overtook the U.S.