Russia’s crisis is over, but the pain of recession is just starting 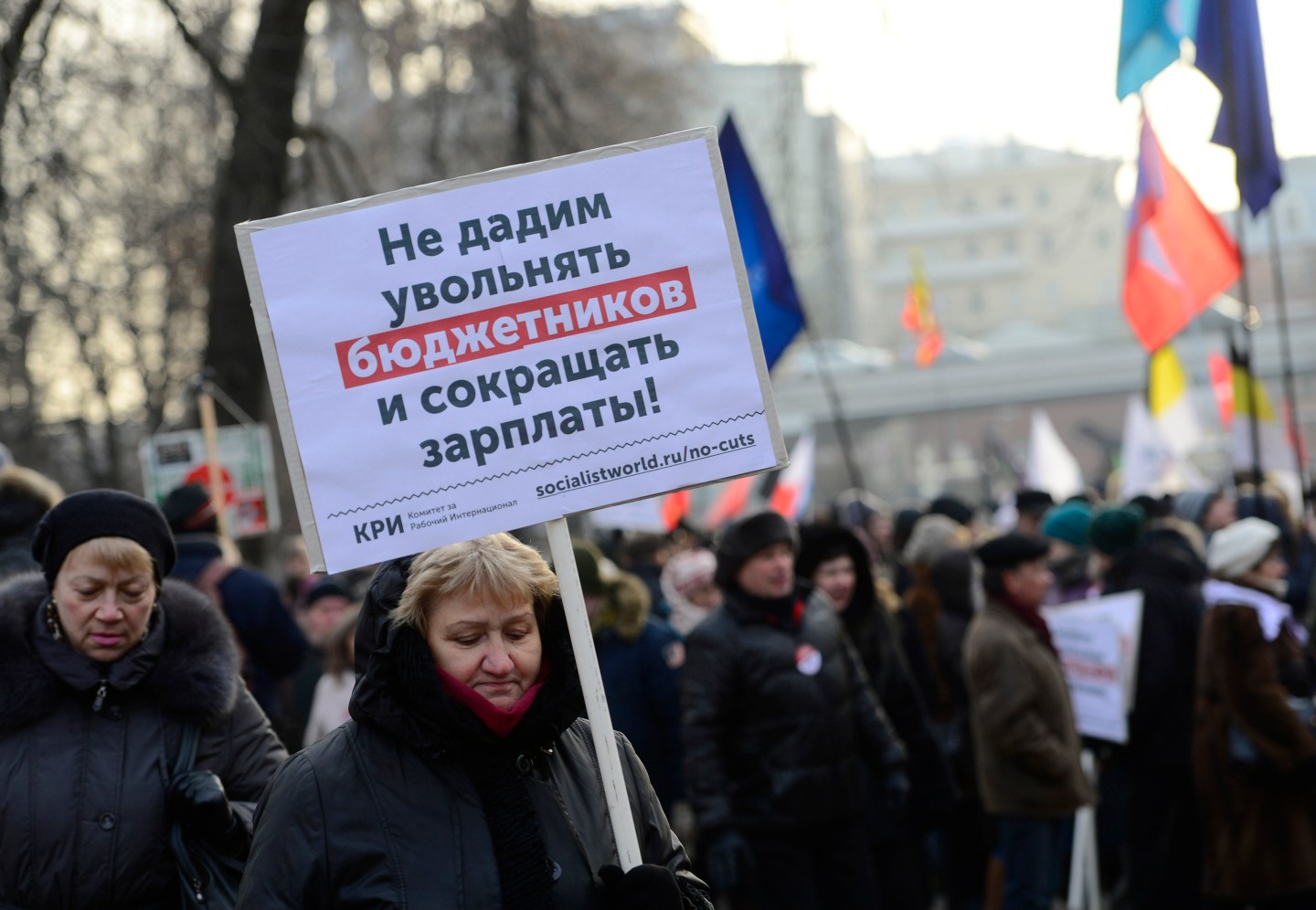 Russia’s central bank effectively declared an end to the economic crisis that set in last year in the wake of the collapse in oil prices, even though evidence suggests that a return to robust health is still a long way off.

The central bank said Thursday it has resumed regular purchases of foreign exchange on the open markets, the clearest sign yet of its confidence that there’ll be no more panic like the one that hit in December. That move will let allow it to replenish its stash of foreign reserves. which have fallen by more than a quarter 28% since the start of 2014 (they stood at a still sizeable $358.5 billion last week).

It’s by no means the first sign that things have returned to a new normal. President Vladimir Putin was confident enough to tell a nationwide TV session last month that the worst was over, and the central bank itself has already cut interest rates twice since jacking them up to 17% in December, as inflation starts to retreat from a peak of 16.9%.

The dollar, which at the start of February bought 70 rubles, now only buys 50 (although that’s still a rise of 50% from before Putin’s troops annexed the Ukrainian region of Crimea last year). and officials have been sending signals for weeks that they don’t really want the currency to appreciate any more.

As the chart shows, the ruble has already recovered more quickly than the oil price on which it largely depends. Putin’s government needs the dollar to stay strong so that the dollars it receives from oil and gas exports will buy enough rubles to pay for pensions, public-sector wages and a burgeoning military.

But capping the ruble’s rise means that the population is having to adjust to a lower standard of living than it got used to in the first 14 years of Putinism. Wages have been lagging inflation since October, and research by Nielsen (quoted by the Russian newspapers Vedomosti and RBK Thursday) showed consumer confidence in the first quarter was even lower than in the depths of the 2008-2009 collapse, when the economy contracted much more sharply. Retail sales were down 8.7% on the year to March, while car sales were down a staggering 42%, according to the Association of European Businesses in Russia.

And it will be harder to get away from it all this year, too: last year’s currency swings bankrupted 30 tour operators, including the country’s largest. Irina Tyurina, spokeswoman for the Russian Tourism Industry Union, told The Moscow Times recently that outbound departures would fall between 50% and 70% this year.

Liza Ermolenko, an analysts with Capital Economics in London says it’s clear now that the economy actually held up much better than it did in 2009, but says “the big picture is still contraction,” in the absence of structural reforms to the economy.

She notes that the government has slashed productive investment on things like transport infrastructure this year in order to preserve a defense budget that accounts for 20% of all federal spending, over 4% of GDP. Elsewhere, the country’s Audit Chamber noted last month that budget cuts contributed to a 17,000-rise in deaths in state hospitals.

The European Bank for Reconstruction and Development said Thursday it expects Russia’s economy to shrink by 4.5% this year and another 1.8% next year–a forecast that is much more pessimistic than the Economy Ministry’s expectation of 2.3% growth.