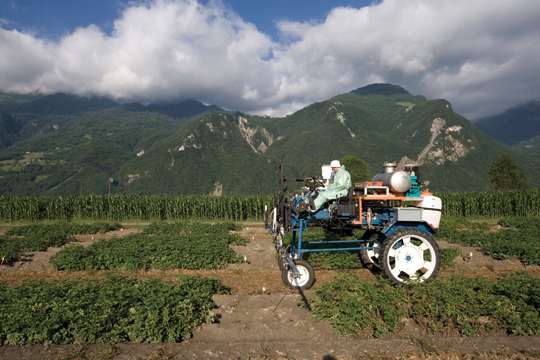 The deal would be the biggest in the world so far this year alongside the Berkshire Hathaway-sponsored merger of Heinz and Kraft, creating an industry giant with over $30 billion in annual sales.

Monsanto has long been interested in the Swiss company, which sells seeds, insecticides and other crop protection products. For a long time, the deal offered Monsanto the possibility of a tax-efficient “inversion” into Switzerland, although the Obama Administration’s clampdown on such practices last year now mean that’s highly unlikely.

One clue to Monsanto’s interest is in the timing of the offer. Syngenta’s shares (SYT) have been struggling this year, due largely to currency-related effects. A high cost base in Switzerland has only gotten more expensive since the Swiss National Bank abandoned its efforts to cap the franc against the euro.

More intriguingly, the offer comes less than a month after the E.U. took a landmark decision allowing its 28 member states the freedom to decide whether to let genetically modified crops be planted. Resistance by a number of states such as Austria has led to a near-complete ban on GMOs in the E.U., one of the world’s largest agricultural markets, for over a decade.

“The offer fundamentally undervalues Syngenta’s prospects and underestimates the significant execution risks, including regulatory and public scrutiny at multiple levels in many countries,” Syngenta chairma Michel Demaré said in a statement.

Demaré said the company’s internal drive to improve profitability and bring new products to market would allow it to deliver the same benefits promised by Monsanto, pointing to a strong presence in emerging markets and five years of revenue growth over 10%.