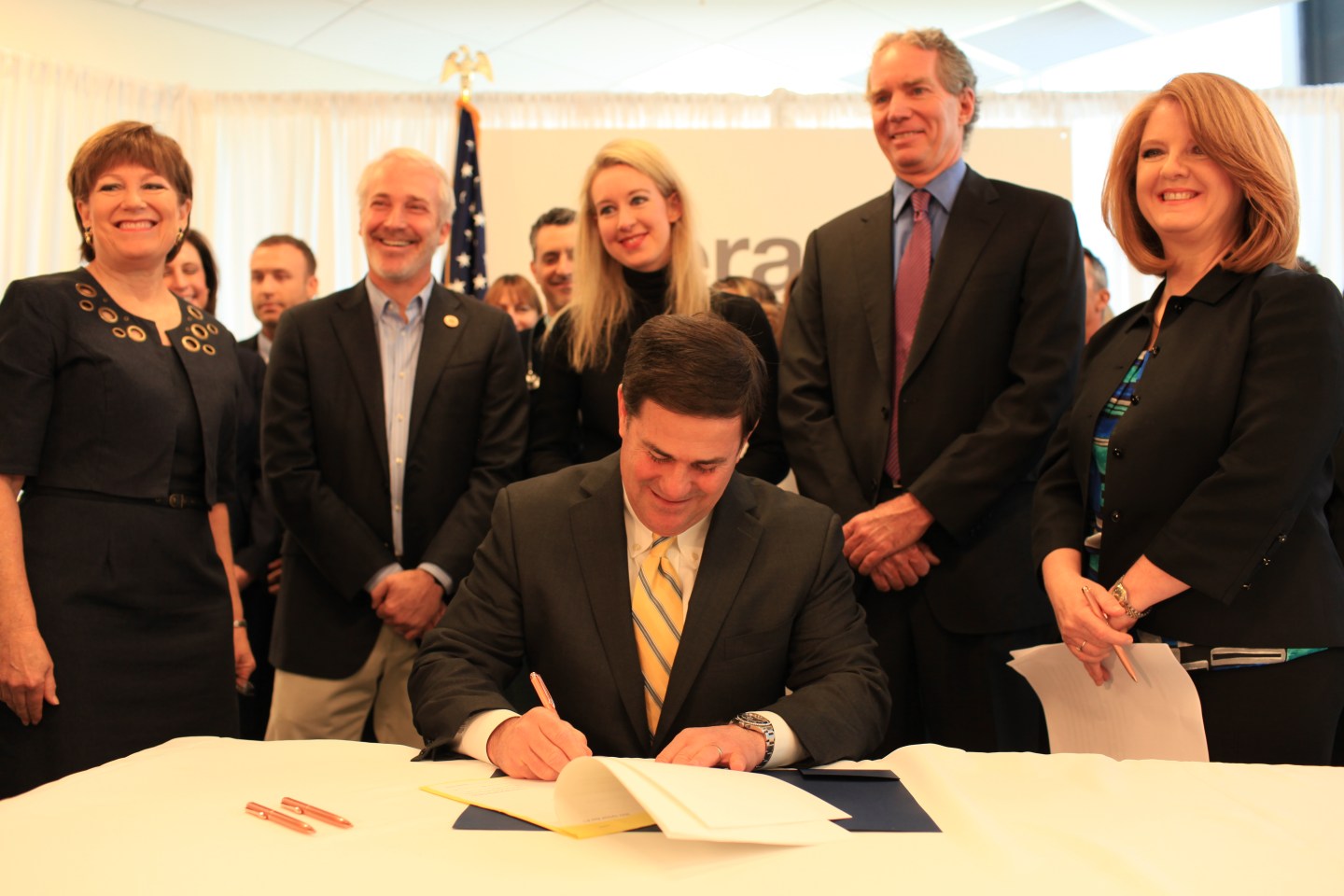 The photo was taken on April 6, 2015, at Theranos's lab facility at SkySong Center, in Scottsdale, Arizona. It shows Arizona Governor Doug Ducey signing into law a bill legalizing direct consumer ordering of any lab test. Behind him is Elizabeth Holmes, founder and CEO of Theranos. At far right is Rep. Heather Carter, of Cave Creek, Arizona, who sponsored the bill.
Photograph by Erica Montgomery

Last month Arizona Gov. Doug Ducey signed into law a bill that gives consumers there the most robust and explicit rights in the country to order any lab tests they want, without having to go through a doctor. Ducey signed the bill at the Scottsdale laboratory of Theranos, the blood analytics company, with company founder and CEO Elizabeth Holmes standing a few steps behind him.

“Arizona’s law is historic and can serve as a model for our nation,” Holmes says in an email. “It is essential to the creation of a modern health care system that enfranchises and empowers individuals and their physicians to get access to the information they need in time to change outcomes, encourages transparency in pricing, and focuses on preventive care and early detection, all of which will reduce health care costs, and most importantly, save lives.”

Holmes’s objectives in this instance also happened to dovetail with broader currents of thought in contemporary society, including what has been called the “Quantified Self” movement, and what cardiologist-writer Eric Topol has referred to as the growing “democratization” of lab testing. In his recent book, The Patient Will See You Now—whose title alludes to the upending of the traditional physician-patient hierarchy—Topol predicts that we will all eventually be performing lab tests on our smartphones.

Whether because of this favorable zeitgeist or Holmes’s persuasiveness—she testified on the bill’s behalf before the Arizona house and senate health committees—the bill, introduced in February, passed swiftly and nearly unanimously (60-0 in the house, 26-2 in the senate), before being signed into law April 6. It takes effect July 3.

Just two weeks after it was signed, David King, the CEO of Laboratory Corp. of America (LH), told Bloomberg Business that his company would be strengthening its involvement in the consumer lab test market. “We need to retake that territory for ourselves,” he told that publication. “It’s something consumers increasingly want to have access to, and it’s something we’re doing already and our capabilities are being utilized without us getting the benefit from a branding perspective.” (At the moment, LabCorp performs some direct consumer lab tests under contract with Direct Laboratory Service, which runs an online direct-to-consumer portal.)

At the same time, in a statement emailed to Fortune for this story, F. Samuel Eberts III, LabCorp’s chief legal officer and vice president of corporate affairs, sounded a more cautionary note: “We support the democratization of lab testing,” he wrote, “but not all tests and results are created equal. Some test ordering and result delivery are most appropriately handled through the traditional doctor-patient relationship.” He said LabCorp played no role in the Arizona legislation.

The leading independent lab, Quest Diagnostics (DGX), took no position on the Arizona law, according to a spokesperson. She says the company already performs some direct consumer screening tests through its Blueprint for Wellness program and “through our relationships with several large retailers, pharmacies, super markets, urgent care providers and lab resellers.”

On the day the bill was signed into law, however, a spokesperson for Quest’s 49-percent-owned Arizona subsidiary, Sonora Quest, offered negative comments to a radio station: “We continue to maintain that the management of personal health is most effective when it involves a partnership with a primary care provider.” That spokesperson added that Sonora Quest had always declined to fill any self-ordered tests—even though Arizona’s old law permitted a limited number of designated tests to be self-ordered.
[fortune-brightcove videoid=3830222255001]

Holmes dropped out of Stanford in 2004, when she was 19, to found Theranos. After developing and honing its proprietary testing techniques while working on drug trials for pharmaceutical companies, Theranos started offering lab tests to the public in November 2013. The most distinctive aspect of Theranos’s tests is that the vast majority of them are performed on a just a few drops of blood, drawn nearly painlessly from a pricked finger. Venipuncture is still used for certain less common tests the company hasn’t yet adapted for fingerprick analysis. In addition, this year the company has begun performing a class of rare, sophisticated tests, known as “esoterics,” which independent labs ordinarily send to specialized “reference” labs. Theranos still uses venipuncture for those, and performs them at its lab in Newark, Calif.

The second most distinctive thing about Theranos’s tests is their very low and transparent prices. Unlike the major labs, Theranos posts all its prices publicly—charging everyone the same, regardless of insurance situation. The company says it never charges more than half the Medicare reimbursement rate, and often charges much less. (A set of tests, or “panel,” relating to fertility costs $34.95, for instance, which is 70% off the Medicare reimbursement price, the company says.)

In practice Theranos’s prices average roughly half what an insured consumer would pay for a doctor-ordered test at an independent lab (like Quest or LabCorp), and a smaller fraction of what they’d pay a hospital-affiliated lab. (My last routine blood tests, drawn at my physician’s office for an annual physical and then analyzed by a hospital-affiliated lab in the New York metropolitan area last month, cost me $433 out of pocket, even after application of my “gold”-level insurance discounts and payments. Had I not been insured, the lab’s price for those tests would have been $2,411, according to the explanation of benefits sent me. The same tests, according to Theranos’s price menu, would have cost me $75.)

The techniques that enable Theranos to perform tests on such tiny samples at such low cost are closely held trade secrets, and the company’s opacity in this regard has triggered controversy within the profession. (For a fuller discussion, see a cover story on Theranos and Holmes that I wrote last June.)

When Holmes started providing lab services to the public, she did it in partnership with Walgreens, which committed to gradually incorporate Theranos Wellness Centers, as they’re called, into a significant percentage of its 8,200 stores nationwide. Holmes chose to make Arizona her showcase state for the rollout because of its large Medicare, Medicaid, and uninsured populations, according to a Theranos spokesperson. Theranos’s dramatic price advantage would quickly become manifest to both patients and taxpayers, Holmes felt.

So far 40 Theranos Wellness Centers have opened at Walgreens across the Phoenix metropolitan area. (There’s another one in Palo Alto, where the company is based.) The Phoenix centers are serviced by Theranos’s federally licensed lab at Scottsdale’s SkySong Center, a technology innovation hub run jointly by private developers and Arizona State University.

Representative Carter met Holmes at the ribbon-cutting for one of Theranos’s first two Arizona-based Wellness Centers, which was in Carter’s district in north Phoenix. Carter asked Holmes about direct consumer lab testing at their very first meeting, Carter recounts in an interview. Because of her family medical history, she explains, she was eager to run certain tests herself without always having to first consult a doctor. Holmes explained that she is a strong proponent of the concept, which is core to realizing her long-term vision.

At the moment, the nation’s laws and practices on direct consumer lab testing are a confusing patchwork. Thirteen states prohibit such testing outright, according to Theranos, while another ten—including Arizona until its new law takes effect in July—are “limited access” states, where consumers can directly order only a designated list of approved tests. The remaining 27 states and the District of Columbia permit direct testing, according to Theranos, although only Virginia had said so explicitly in legislation prior to the Arizona law; the remaining states are presumed to permit it since they don’t expressly forbid it.

But the fact that such testing is already legal in most states has not made it easy, common, or cheap. Such tests are not generally reimbursed by insurers, and they are usually obtained through specialty online services like WellnessFX and Direct Laboratory Services. Those companies, which do not operate in a handful of states, have doctors on contract who write lab test requisitions for customers who order online, and then send the customers to get their tests performed by Quest and LabCorp respectively.

In Arizona, because of Theranos’s presence, consumer testing may become easier, cheaper, and—for those who don’t like needles being stuck in their arms—more pleasant than it has been previously.

If there proves to be a major market for consumer lab tests, and labs start aggressively vying for that business, competing labs will need to post their prices, too, which could lead to price competition. But publicly posting low prices for direct-to-consumer tests may also make it hard for labs to charge higher prices to other payers, including Medicaid and Medicare. Some states specify that Medicaid must get the best price, while Medicare regs bar labs from charging it “substantially in excess” of their usual charges to others.

The Arizona legislation provides that when a consumer does directly request a test, the results, when reported to the consumer, “shall state in bold type that it is the responsibility of the person who was tested to arrange with the person’s health care provider for consultation and interpretation of the test results.”

Because of physicians’ fears of incurring liability for not acting on health tests ordered by their patients without their knowledge—an objection raised by some physicians during the legislative process, according to one of Carter’s staffers—the final law gives doctors immunity from lawsuits based on their failing “to review or act on” tests they did not order or authorize.

The law also forbids labs from directly submitting claims for reimbursement to insurers for consumer-ordered lab tests. But this provision was added to deal with an administrative issue that had arisen, according to a Theranos spokesperson. If an insurer eventually chooses to reimburse consumer-ordered tests, she says, nothing will prevent a consumer from filing a claim and being paid.

Representative Carter says that since the bill became law, she’s been surprised by the number of constituents and neighbors who have personally thanked her for it, commenting on how they’ve long desired the right the law now gives them.

“People are really, really talking about it,” says Carter. “This one really stands out.”