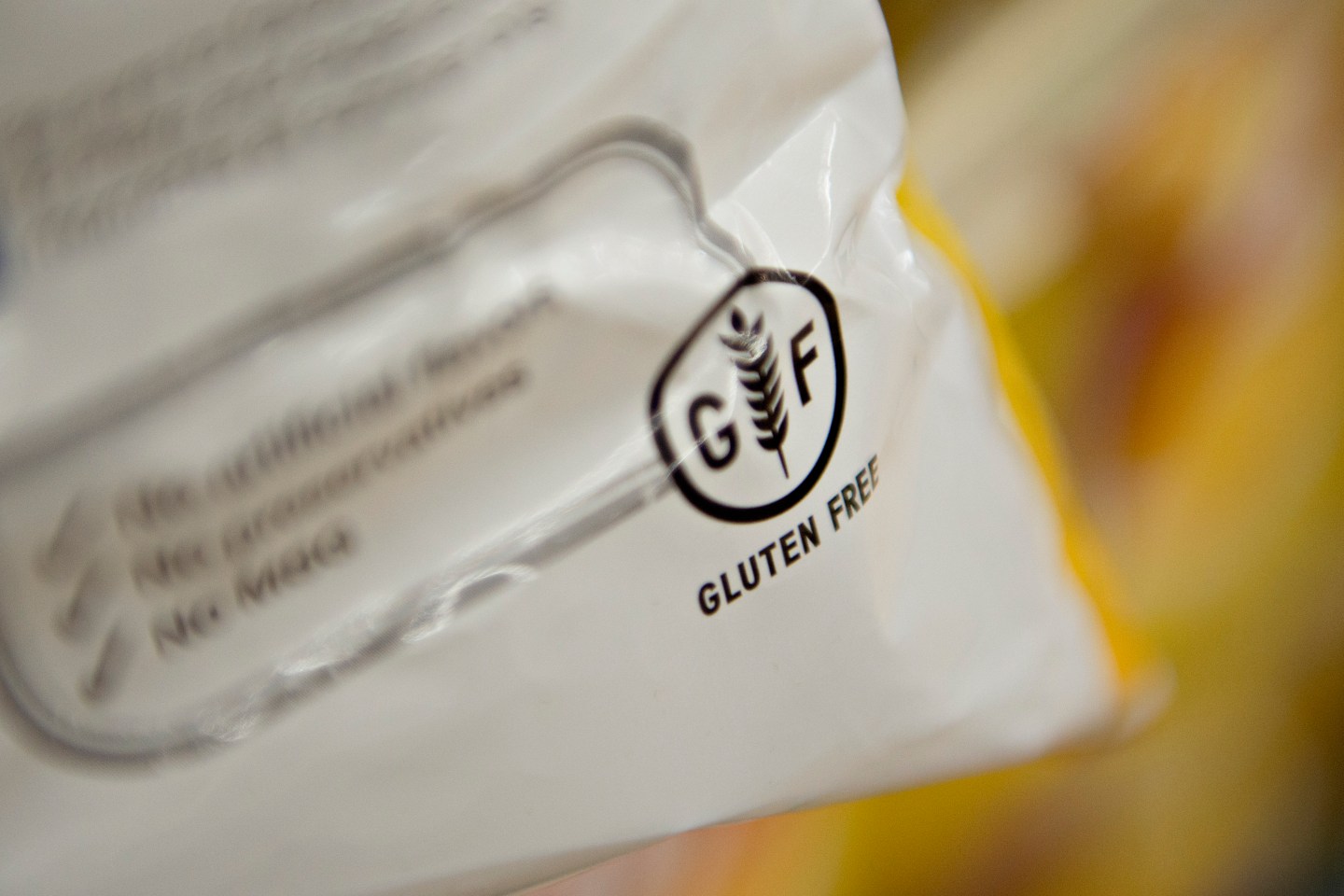 "Gluten Free" appears on the packaging for a bag of Frito-Lay Inc. Lays brand potato chips displayed for sale at a supermarket in Princeton, Illinois, U.S., on Wednesday, Aug. 7, 2013. The Food and Drug Administration (FDA) is issuing a final rule to define the term "gluten-free" when voluntarily used in food labeling, according to a notice published in the Aug. 5 Federal Register. Photographer: Daniel Acker/Bloomberg via Getty Images
Photograph by Daniel Acker — Bloomberg via Getty Images

Gluten-free. It’s among the hottest trends in food today. It competes with “non-GMO,” “local” and “organic” for mindshare among today’s health-conscious, price-insensitive, and trend-following foodies, yuppies, and self-anointed amateur nutritionists. It’s become so fashionable to be gluten-free that even Fido and Spot have jumped on the bandwagon.

Like all such sweeping trends, it has a powerful attractive force that lures innocent bystanders into asking if they too should join the party. Last Fall, The New Yorker ran an article entitled“Against the Grain: Should You Go Gluten Free?” to help readers answer the very question. Grain Brain and Wheat Belly hold entrenched positions on lists of today’s best selling books. Gluten-free is clearly on the minds of many.

Like financial bubbles, the herd behavior identified by such popular attention is never sustainable. Here’s the big disconnect that captures the essence of the problem: less than 1 percent of the population has celiac disease, approximately 6 percent are gluten intolerant, and … drum roll please … almost 30 percent of American adults are trying to avoid gluten. One of the main reasons consumers avoid gluten is they feel it’s healthier. It’s generally not.

The blunt reality is that many gluten-free foods are not healthier for the 93 percent of the population that doesn’t have celiac disease or gluten sensitivity. Consider that a Glutino Original New York Style Bagel has 26 percent more calories, 250 percent more fat, 43 percent more sodium, 50 percent less fiber and double the sugar of a Thomas’ Plain Bagel. Further, because many gluten-free products utilize rice flour, they are also at risk of containing higher levels of arsenic than desirable or healthy.

And then there’s the cost. The Glutino bagel I just described costs 74 percent more than the Thomas’ bagel. Nabisco’s Gluten-Free Rice Thins cost 84 percent more per cracker than Nabisco’s Multigrain Wheat Thins. And when it gets to baking products, the costs are even higher. Betty Crocker’s gluten-free brownie mix is more than 3 times the cost per serving of Duncan Hines regular mix.

While economic logic might lead you to conclude that higher prices would lead to lower demand, you’d be wrong. In a classic indicator of bubble dynamics, higher prices have been met with higher demand.

That’s right, despite the facts I’ve just shared — namely that gluten-free may harm those not needing it for health reasons and that it’s more expensive — the gluten-free craze continues. Market research firm Nielsen estimated that sales of products with a gluten-free label have doubled in the past four years, rising from $11.5 billion to more than $23 billion. While the trend is impressive, it’s partially driven by marketing efforts. Chobani Greek yogurt and Green Giant vegetables, for instance, added “gluten free” labels onto products that never contained gluten. Add a label, grow your sales! Reminds me of Internet mania when merely announcing a URL increased valuations overnight.

Consider Trader Joe’s campaign advertising “Gluten-Free Greeting Cards For 99 Cents Each! Every Day!” Another sign the gluten-free bubble is nearing its end is the popular backlash against casual gluten-free diners.

None of this is to suggest that there isn’t a real underlying need for gluten-free products. There is, and I know from personal experience. In October 2011, my doctor informed me that a blood test indicated I had heightened sensitivity to gluten. The sensitivity was so high he recommended a gluten-free diet. I protested, suggesting he was over-diagnosing my unhealthy diet.

I asked: “Have you considered icecreamitis? That’s a disease I know I have,” bluntly admitting my addiction to the divine creamy frozen sugar to which I was devoted. I insisted he conduct a genetic test to determine if I had a genetic marker for celiac disease. When the results came back, I was saddened to learn that I indeed had the gene. I’ve been gluten-free for 3.5 years now and I genuinely do feel better.

Whether you have celiac disease, are gluten intolerant, or just part of the fashionable trend-following crowd, you can rest assured that this article is certified gluten-free.

Vikram Mansharamani is a Lecturer at Yale University in the Program on Ethics, Politics, & Economics and a Senior Fellow at the Mossavar-Rahmani Center for Business and Government at the Harvard Kennedy School. Visit his website for more information or to subscribe to his mailing list. He can also be followed on Twitter.