The fittest CEOs in America? 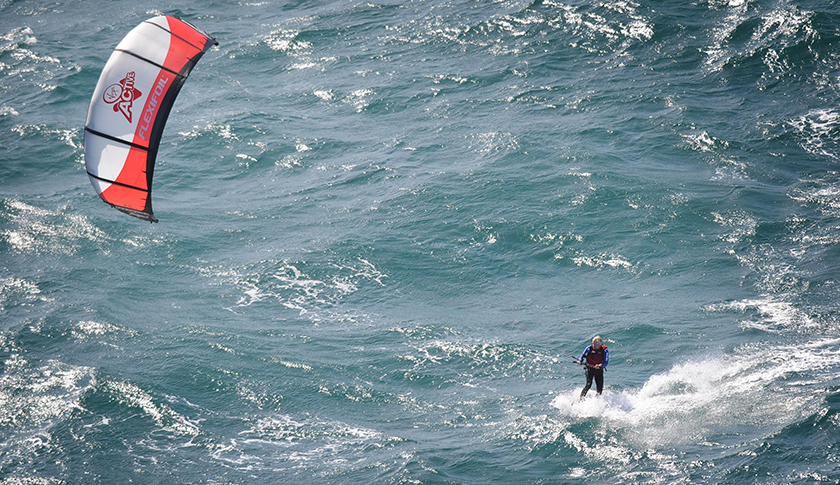 Branson kite-surf record. Sir Richard Branson 61, kite-surfs to northern France, from Dymchurch in Kent, entering the record books as the oldest person to kite-surf the English Channel - on his second attempt in 24 hours. Picture date: Sunday July 1, 2012. The Virgin tycoon crossed from Dymchurch, Kent, to Wimereux in three hours, 45 minutes to establish the first Guinness World Record for the oldest person to make the crossing by kite-surf. He failed to secure the second world record he was also eyeing, which was set by his son Sam only yesterday for the fastest cross-Channel kite-surf. See PA story ADVENTURE Branson. Photo credit should read: Stefan Rousseau/PA Wire URN:13942192
Photograph by Stefan Rousseau — PA Wire/AP

For CEOs, being fit isn’t just about health or vanity–these days it’s another part of the job. If an executive is visibly out of shape, others in the workplace may perceive them as less effective both in performance and in interpersonal relationships, according to research by the Center for Creative Leadership.

Exercise for bosses is no longer limited to making deals on the golf course. They’re now working out at their office gyms, they’re biking to work or on international charity rides, and they’re competing with peers in organized competitions from CEO Challenges. The 2014 winner of their Fittest CEO competition was Shawn Talbott, Chief Science Officer of LifeVantage Corporation.

The following are 6 leaders of business who have gone public about their fitness routines and their benefits.

The 51 year-old CEO of Twitter is into Crossfit workouts, and last fall he let the world know using--what else?--Twitter ,with a description of his grueling workout. A viral jab about Twitter's management by Paypal's Peter Thiel--who said, "there's probably a lot of pot-smoking going on there"--prompted the tweet-storm from Costolo.

True to the Crossfit workout brand, it combined weights and lifts (a 100 pound barbell) with cardio, plus after each of 3 rounds came 25 reps of the "toes to bar" move, involving hanging by one's arms from a pull bar and touching toes six times to the bar. Costelo also celebrated last Memorial Day by putting himself through the even more intense Murph Crossfit workout.

He's now in his mid-fifties, but Craig Esrael still remembers enduring cruel teasing as an obese child and young man. He began turning his life around as a teenager, losing 65 pounds in one summer, and remains committed to fitness today. In the workplace he provides healthy foods, exercise programs, and a yoga class for managers.

He told Jewish Scene Magazine in 2013 he gets up at 4 a.m., walks and runs about four miles, then does push-ups and sit-ups. Then throughout his day he takes the stairs and breaks out push up bars or weights. He's able to keep this up despite the travel involved in being a CEO. “Since my regimens are not contingent upon weather, location, equipment or other people, I can do them anywhere and at any time, which really comes in handy when trying to meet the demands of a CEO’s schedule, and mine involves a lot of traveling. I may not be able to pack weights in my suitcase, but a jump rope and push-up bar fit just fine."

In 2013, having just completed his first Iron Man triathalon, the then-52 year old Frits van Paasschen gave an interview to an AP reporter while biking laps through New York's Central Park. The resulting article revealed that van Paasschen is vegan, works out six days a week, and altered the menus at Starwood properties to include foods thought to promote well-being and longevity.

During his time holding several positions at Nike, he regularly had jogging meetings. In 2012, he completed a 350 mile charity bike ride from Chamonix, France to Monaco, many of those miles high altitude climbs, and the next year he rode from Salzburg to Munich. "I'm not competing against other CEOs," he said on that bicycle interview. "It's really a kind of a personal goal setting thing."

T. Boone Pickens tries out a machine in the new weight room at Oklahoma State, Monday, Aug. 17, 2009, in Stillwater, Okla. Through a series of donations, Pickens provided the bulk of the funding for a $286 million stadium overhaul. (AP Photo/Sue Ogrocki)

In 2013, Pickens, then 84, wrote about fitness on LinkedIn: "When You're Young, Fitness is Sport. As You Age, It's Necessity." In it, he called fitness a daily priority, starting his day at 6:30 by telling his trainer "push me to the limit." That could include cardio and weights, some days working on the chest, other days arms or back and shoulders, still other days leg strength work, and two sets of abdominal crunches with a 15-pound weight on his chest.

It's working, because Pickens said, "I’m convinced that workouts not only strengthen my body but they also strengthen my mind. I never feel overwhelmed, and I rarely feel tired despite one of the toughest business schedules I’ve ever had."

Entrepreneur Esther Dyson of Switzerland hovers in mid-air during a zero-gravity flight above the Moscow region as she trains to be a back-up spaceflight participant January 15, 2009. REUTERS/Sergei Remezov (RUSSIA) - RTR23F8G

Okay, Esther Dyson isn't a CEO. But the angel investor/founder of HICCup.com/chairman of EDventure Holdings does have a workout regime that is remarkable. She recently wrote in a Wall Street Journal  column about her longtime habit of swimming 50 minutes a day. She is now 63, and since the age of 18, she missed less than one day a year except for the two weeks when she was training as a cosmonaut in 2009. "I don’t know much about meditation, but I suspect that this daily routine—more mental than physical—has kept me sane and balanced." After the daily swim, she usually bikes to work.

Sir Richard Branson participates in an on court stunt during the second half of an NBA basketball game between the Chicago Bulls and the Atlanta Hawks Wednesday, April 15, 2015, in Chicago. The Bulls won 91-85. (AP Photo/Charles Rex Arbogast)

Author Tim Ferriss shared an anecdote in his book, The 4-Hour Body, that a group was traveling by boat to Richard Branson's Necker island when someone asked Branson how to be more productive. His answer: "Work out." Branson said it gave him four extra hours of productivity a day. Branson himself, who is 64, wrote that running in the Virgin London Marathon was one of the most satisfying days of his life, and he also competed in the Virgin Active Triathalon. In 2012, he scaled Western Europe's tallest peak, Mont Blanc, along with his daughter, son, son's fiancee, and Princess Beatrice of York. Branson also plays tennis and kitesurfs.