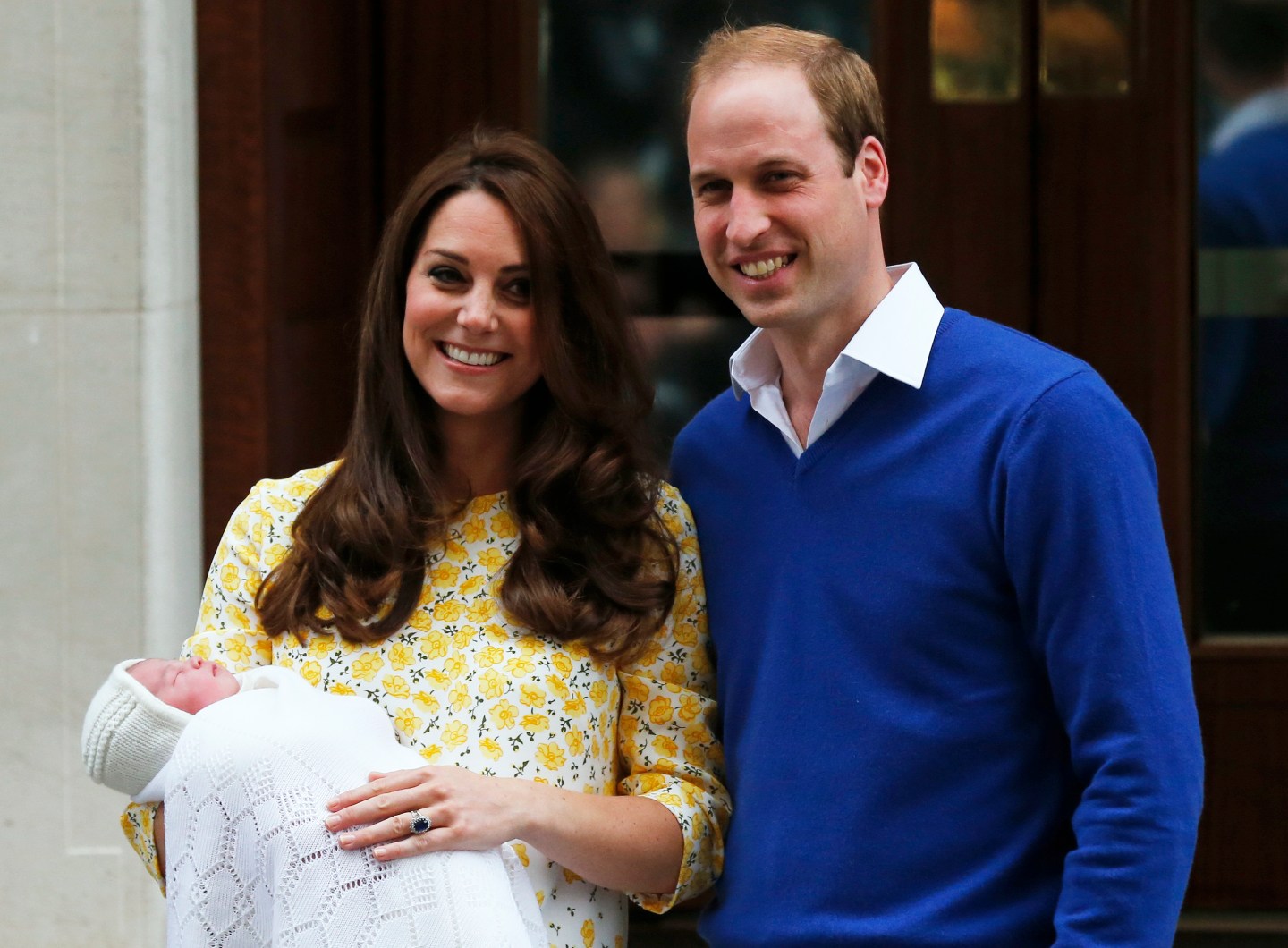 Britain's Prince William and his wife Catherine, Duchess of Cambridge, appear with their baby daughter outside the Lindo Wing of St Mary's Hospital, in London, Britain May 2, 2015. The Duchess of Cambridge, gave birth to a girl on Saturday, the couple's second child and a sister to one-year-old Prince George. REUTERS/Suzanne Plunkett - RTX1B94C
Photograph by Suzanne Plunkett — Reuters

After a day of waiting, the world’s press got their first look, and first photographs, of the newest member of the royal family at around 6pm on May 2. The picture of the Duke and Duchess of Cambridge standing outside the hospital doors, new baby in Kate’s arms, will be one of the defining images of the year.

The young parents may well have been relieved by the lower level of frenzy that has surrounded the birth of their second child. For one thing, it probably made the whole experience a lot easier to deal with. But for another, it helps William and Kate cement their status as the most “normal” royals in the palace.

Taken literally, the royal family is, just that – a family, albeit with a dynasty spanning thousands of years. But the idea of the monarch and their relatives as an exemplary, model unit has been a key aspect of royal family PR for more than 100 years.

The road to normal

The value of presenting the royals as ordinary people was first recognised during Queen Victoria and Prince Albert’s reign in the 19th century. The couple’s down-to-earth attitude and strict standards of personal morality made them icons of Victorian values. And the marriage of their nine children into various European royal dynasties earned Victoria the nickname “the Grandmother of Europe.”

Their apparent steadfastness in the face of wartime threats and sacrifices was illustrated by photographs of the young girls in a variety of relaxed, carefree poses. These were aimed at reassuring the public of their collective safety – even if the pair were generally positioned in front of unidentifiable backdrops to shield their location from potential attacks.

The national affection for the family, and in particular for Princess Elizabeth, never waned, and her accession in 1952 when she was already a mother to two young children – Charles and Anne – was a popular move.

The decline of the British Empire and the rise of the Commonwealth placed the new Queen at the apex of a worldwide, multicultural family, and so it followed that she must exhibit comfort and contentment with her “normal” family life. This idea of normality became central to the workings of the royal institution and the monarchy was pushed to embrace the popularity of television and the illusion of intimacy this promoted.

In 1969 the family featured in the first royal fly-on-the-wall documentary, which showed them cooking a barbecue together at Balmoral. The Queen prepared salad while Charles and Anne grilled sausages. The documentary was hugely popular at the time, even if it is now embargoed by the Queen.

This iconography of family values is now best embodied by the Duke and Duchess of Cambridge. After the birth of Prince George in 2013, they were pictured sitting on the grass in the Middleton family garden, along with their dog Lupo, mirroring the pose of the Queen’s family 53 years earlier. No doubt with baby Cambridge number two, a similar shot will be produced.

This is partly just a reflection of celebrity culture in general, where public relations are enhanced through carefully managed and structured intimacy. The royal family are, after all, an institution like any other, with press relations officers and spin doctors aplenty.

But there is also more than a hint of class disguise at play when William and Kate spread out on the lawn. As Michael Billig wrote, this performance of ordinary is part of “an ideological job of settlement” which staves off antipathy towards royal privilege from the lower classes. To maintain their popularity (and, ironically, their superiority), they have realised they must be relatable and in touch with everyday values.

This has been perfected by yummy mummy Kate and everyman William, who have successfully embodied what looks to all intents and purposes like an upper middle-class lifestyle – despite the vast hereditary wealth and hundreds of staff at their disposal. The very image of the couple on the grass with baby George is carefully choreographed to match the middle-class ideal, right down to being taken in the Middleton family garden, and there’s certainly no opulent palace towering behind them.

Likewise, seeing William emerge from a hospital wing carrying his new child in a car seat, before driving her and his wife back home himself, mirrors the experience of many young fathers, even if the gaggle of press watching his every move (and the helicopter tracking his car) does not.

The trouble with normal

But as the real middle class is being squeezed ever tighter by stagnant wages, the rising cost of living and low employment rates, is it helpful to have Kate and William, whose second home Amner Hall cost the taxpayer millions to refurbish, as the pin-ups of upper middle-class aspirations?

These images are essentially propaganda. They mask William and Kate’s class privilege and hereditary wealth, and most importantly, their constitutional and institutional power.

The monarchy may not be politically powerful in any traditional sense, but it is still extraordinarily socially, culturally and economically powerful. And in an age in which inequality is rising beyond recognition, masking this power is particularly dangerous. It normalises upper-class lifestyles, luxury consumption and hierarchical class structure. It makes colossal wealth inequality into a natural fact of life, and intensifies the contemporary stigma attached to the working classes.

As the whole world melts into a typically sycophantic puddle over Kate and William’s daughter, we need to start addressing the mythology that surrounds the couple. We shouldn’t forget that the monarchy is an institution – and a powerful one at that.

Laura Clancy is a Ph.D. student in Sociology and associate lecturer at Lancaster University, researching representations of the British Royal Family from 1953 to the present day. This article was originally published on The Conversation.
Read the original article.