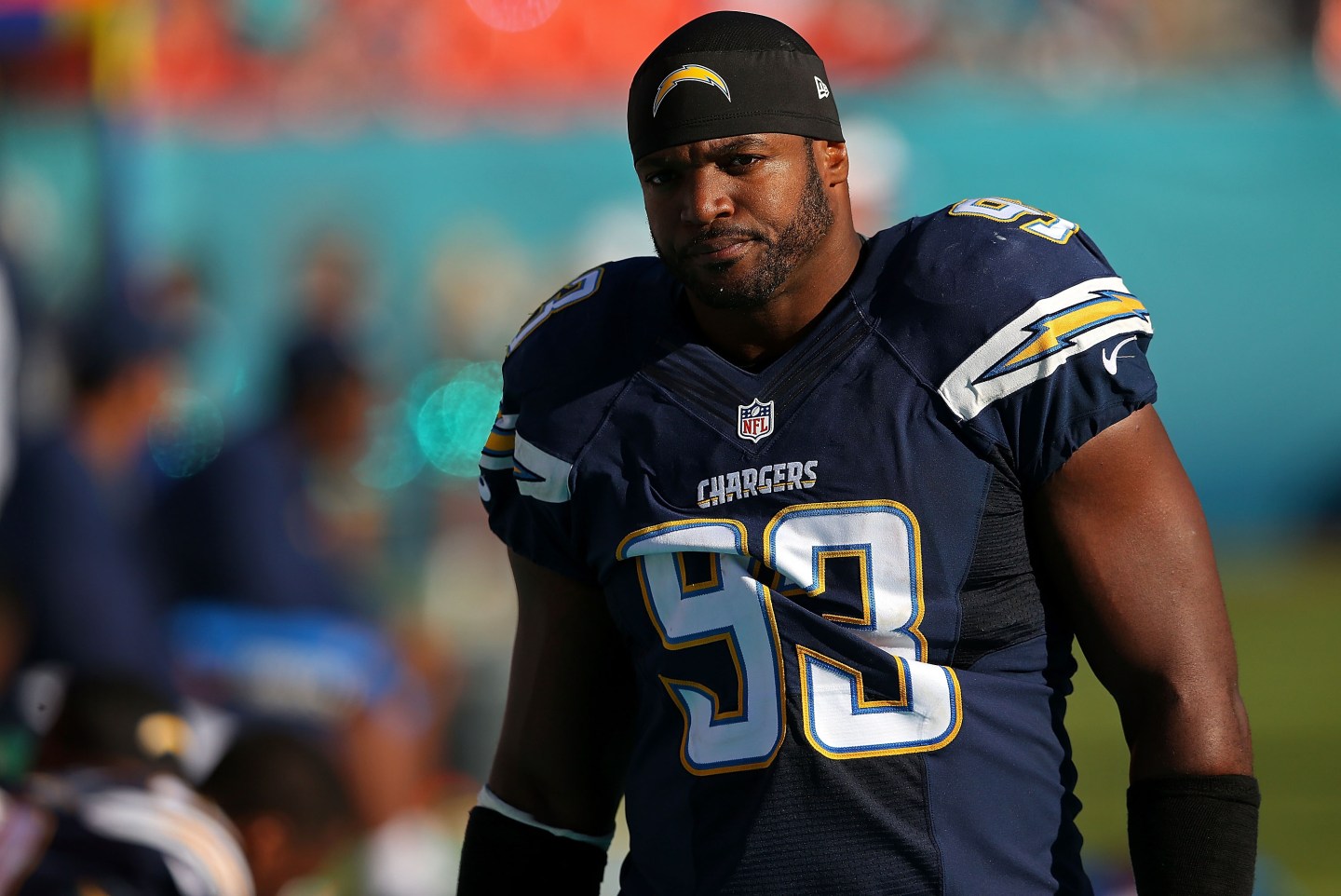 A professional athlete and his money are soon parted.

That may not be the correct idiom, but it’s too often true. “A lot of athletes have been taken advantage of,” says Dwight Freeney, a veteran defensive end/linebacker who has played in the National Football League since 2002. “I really didn’t want to be the next guy on the hit list,” he says, and so, back in 2010 (just before playing in his second Super Bowl) Freeney looked for a safe place to have his money managed.

Instead, he says he became just what he was trying to avoid: an exploited athlete. Freeney is suing Bank of America (BAC) for $20 million. According to the official complaint, Freeney seeks monetary relief for 12 counts, including: conspiracy to defraud, fraudulent concealment, negligent misrepresentation, and breach of fiduciary duty.

The gist of Freeney’s allegation is that he hired Bank of America Merrill Lynch to manage his money, including his NFL salary. The specific adviser he worked with, Eva Weinberg, and a colleague, Michael Bock, took over Freeney’s finances in place of David Sugarman, the person who had first recruited Freeney to the bank. Soon, Weinberg and Bock brought in a man named Michael Stern, who was not a BofA Merrill Lynch employee and whom Freeney says was introduced to him under a fake name, Michael Millar.

In June 2010, Weinberg quit BofA Merrill Lynch without the bank notifying Freeney. He remained her client, and she and Stern eventually stole some $9 million from his accounts. The crimes of these two individuals are not in dispute: in 2013, both were sentenced to five years in federal prison, and were ordered to pay Freeney a combined $4.7 million. But Freeney is continuing with a suit against BofA because it has done nothing to, “make him whole,” says his attorney, Jeffrey Isaacs. He adds that amidst all the activities of Weinberg and Stern, “the bank was nowhere to be found. It didn’t do any internal investigation. And now it won’t take blame.”

Bank of America’s official stance is that the perpetrators of the crimes were punished, and that the primary wrongdoer, Michael Stern, was never working for Merrill Lynch. “Although we sympathize with Mr. Freeney as the victim of a crime, the bank had nothing to do with the criminal scheme,” says a bank spokesperson. “If a client at Merrill Lynch is wronged by Merrill Lynch, we make good on that, and frankly, it is not a long process. But we do not take on responsibility for a former employee’s actions when they’re no longer with the bank.”

Michael Bock, who is named as a defendant in Freeney’s current lawsuit, still works at Merrill Lynch, and the bank says there is no evidence that he stole money or had involvement in Weinberg and Stern’s scheme.

Last week, Freeney spoke to Fortune exclusively about the lawsuit. What follows is an edited transcript.

Fortune: Why did you invest with Bank of America as opposed to hiring a private wealth manager, as many athletes do?

Dwight Freeney: I’ve had experience with that, and that didn’t work. I decided to try to find a place where it was reputable and not a mom-and-pop shop. The biggest reason to go with Bank of America was, if something went wrong, they have insurance, they can backtrack and figure out what happened so that I can recover. Athletes, we have targets on our backs from day one. We’re 21 or 22, with millions of dollars, no experience with managing our money. Some of us make bad decisions. I decided, screw all of that, let me put my money into one of the biggest banks there is, and I’ll trust them, because they have things in place where if something like this does occur, you can still be made whole. But obviously I guess I was wrong.

Now the bank is trying to sweep things under the rug and act as if it never happened. They haven’t even apologized or tried to make things right. I gave them time to try and figure this out and they have been pretty much like, “Whatever, we’re a bank, it doesn’t matter to us.” [He laughs.] I think it’s manipulative.

The bank’s stance is that when Weinberg wronged you, she was no longer working there. What do you say to that?

We’re not even talking about, “is she guilty or not, did she do wrong.” She did wrongdoing, and she got prison time for it. When she left the bank, it wasn’t made clear to me. I got manipulated. They’re responsible. Now, are they going to do anything to make me whole? They’re pretty much saying no.

Do you feel responsible or blame yourself at all?

At the time, you were looking for ways to keep earning off the field. What are the various business ventures you had going?

I had aspirations to get involved in a restaurant. But first, I wanted to see if this was an actual good idea, and that’s how they lured me in. Weinberg said the bank could lend me a business loan to get this thing started, but if I didn’t want that, they had a consultant, Michael Millar, who has $30 million in the bank, and he will invest with you and be your partner. I didn’t know at the time that this was unusual and that the bank isn’t supposed to do that. I was just looking to start this business. The adviser and consultant both embedded themselves in the business, they controlled the books, they recorded all kinds of faulty numbers, and they caused the business to fail.

The business was a Rolling Stone restaurant. I met with Jann Wenner of the magazine, and he licensed the name of the magazine so I could do a restaurant chain. They really gambled and they put themselves out there. And people involved felt the business should have done well. The restaurant was in Hollywood and was open for two years—it shadowed what Rolling Stone magazine was all about. This wasn’t just a place where we’d serve hot dogs. It had a House of Blues atmosphere, where we had performances and music and food. I partnered with a big business that has a great name; they were obviously really disappointed that things didn’t work out.

Do you think Rolling Stone would work with you on reopening one?

So much has happened. The last my people talked to them, they were saying, “Well, when you get things cleaned up, we can revisit it.” They sympathize with me because it was the bank who did this. I’m not sure if they’re willing to do anything after this is all settled and done. I mean, I don’t even know if I want to try something like this again now.

This is all much bigger than the restaurant. Obviously we know restaurants are very risky investments, so it was already uphill, but when you have a bank stealing from you, you have no chance. I did small things here and there over the years, but this was my first really big business deal. And I wanted to get professional people behind me who knew what they were doing.

Do you feel NFL players aren’t given enough guidance when it comes to managing their money?

There’s always symposiums and talks. The NFL has guests come and talk to you about things to watch out for. You hear that and you try your best to avoid it. That’s why I decided to go with a major bank. But I got ripped off. So, after the fact, I’ve had some [fellow players] come up to me and ask, “What can I do?” I have a hard time answering that because the only thing you can do, I guess, is have attorneys watching this person, a CPA watching the bank, have multiple people watching other people. And I feel like that shouldn’t be necessary.

You’re a free agent right now. Has all of this been a distraction to your play?

There are always studies on keeping the off-field distractions to a minimum because they’ll affect your play. I mean, I don’t use excuses, man. But it has been a distraction. Did it affect my play? I don’t know. I do know the more things off the field that you have to worry about, it can affect your play. I do want to continue to play. I’ve been playing 15 years, so I’m like ancient in the NFL. But I’m just going to go out and hope I get picked up. If I don’t, that’s what it is.

I have to handle this here, and it’s a shame it happened. The good thing for me is the fact I’ve still been playing and I can make more of a living for myself. Imagine if this had happened to someone who was in retirement and they have no way to build it back up now.