5 Things to know about the U.K.’s elections 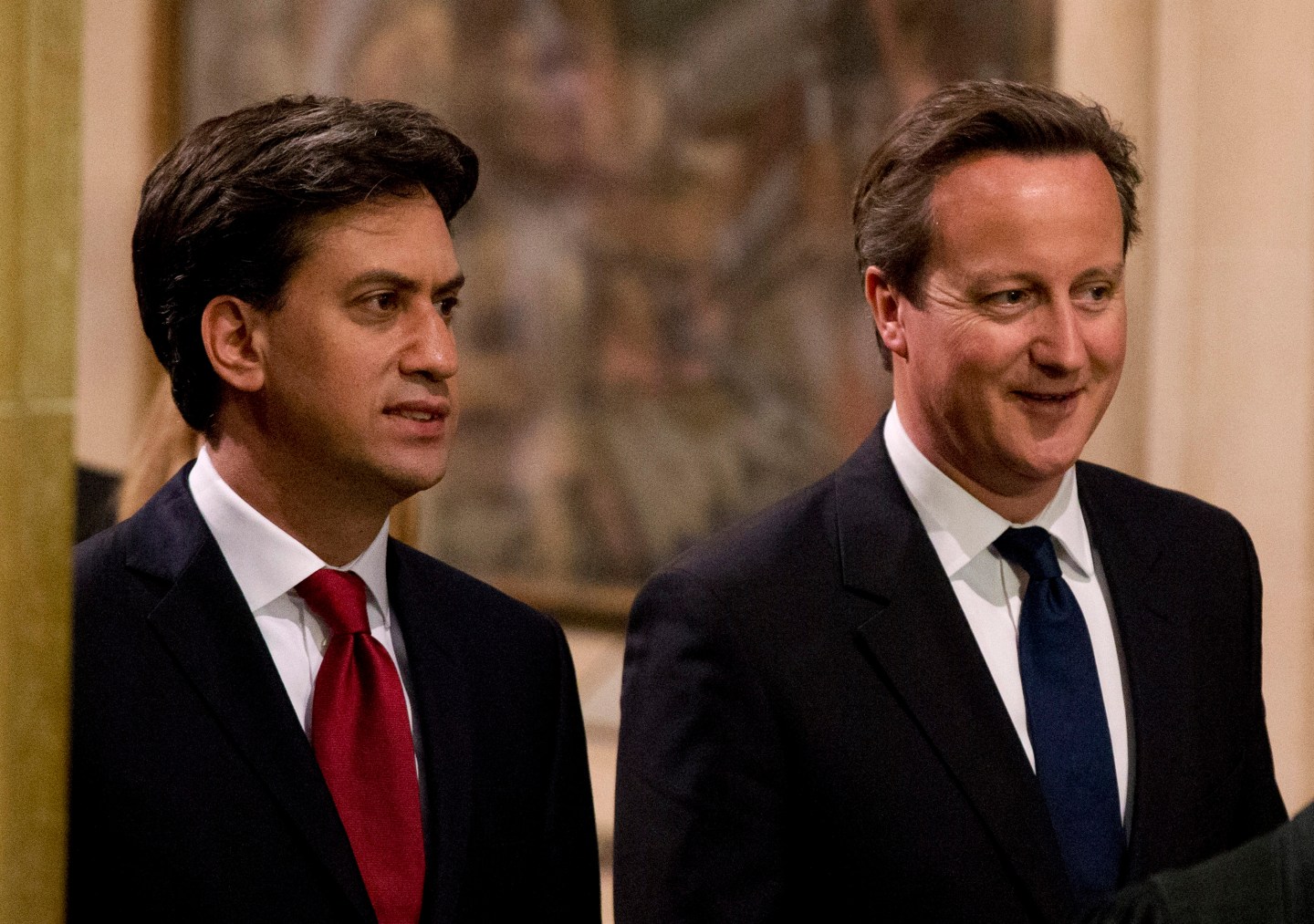 LONDON, ENGLAND - JUNE 04: (L-R) Leader of the Labour Party Ed Miliband and British Prime Minister David Cameron walk through the Central Lobby after listening to the Queen's Speech at the State Opening of Parliament on June 4, 2014 in London, England. Queen Elizabeth II will unveil the coalition government's legislative programme in a speech delivered to Members of Parliament and Peers in The House of Lords. Proposed legislation is expected to be introduced on a 5p charge for plastic bags in England, funding of workplace pensions, new state-funded childcare subsidy and reforms to speed up infrastructure projects. (Photo by Matt Dunham - WPA Pool/Getty Images)
Photograph by Getty Images

The U.K., for decades America’s closest ally and the biggest target for its overseas investment, goes to the polls next week. The polls suggesting neither of the traditionally dominant parties will be able to form a government on their own, and the likely coalitions have a balance of risks that are probably skewed to the downside for the U.S.. Here’s a brief rundown of what people will be voting for, and what’s at stake.

The National Health Service is the closest thing Britain has to a religion today. But its model of universal healthcare, provided free at the point of use and funded by general taxation, is doomed by demographics. The next generation of taxpayers won’t be able to pay for the next generation of pensioners. It’s really that simple. The current Conservative-Liberal coalition has raised spending in line with inflation, but that hasn’t stopped services visibly deteriorating over the last five years. The campaign debate has boiled down to an exchange of vaguely-funded promises on how to find £30 billion ($46 billion) by 2020 just to maintain current levels of service. Dependent on an increasingly gray voter base, no party has had the courage to admit the model is broken, and moot more radical reform.

Far from killing the issue, the failed referendum on independence last September has cemented it at the top of the political agenda in Scotland. The Scottish National Party now threatens to wipe out the once-dominant left-wing Labour Party. According to a poll by IPSOS-MORI, the SNP is likely to win all 59 Scottish seats in the 650-seat parliament. That means Labour, which has always needed Scottish seats to get a majority, has no chance of doing so. Although the SNP denies it, another vote on independence is almost certainly to be the price it extracts for letting Labour form the next government. Labour leader Ed Milliband ruled out any deal with the SNP in a TV debate Thursday, but if the alternative is another five years of Conservative government, he’ll come under immense pressure from his party to change his mind.

The U.K. is retreating from the global stage, and no party in this elections is going to stop that trend: Iraq and Afghanistan have killed the appetite for military intervention, and the country’s diplomatic influence has withered (witness its absence from the E.U. delegations on resolving Ukraine). Not even the traditionally Great Power-minded Conservatives are willing to meet the NATO target of spending 2% of GDP on defense and, given the febrile debate on the NHS, renewing the U.K.’s submarine-based nuclear deterrent at huge cost is a tough sell. The next parliament will likely kill forever the notion that the U.K. can still play a significant role in global security issues.

Britain seems intent on accelerating its slide into international irrelevance by isolating itself from Europe, too. Prime Minister David Cameron has promised a referendum on pulling out of the E.U. if his Conservatives win but, because the Euroskeptic vote is split between them and the more virulently anti-immigrant U.K. Independence Party, he’s unlikely to win a parliamentary majority that will back a referendum. Consequently, the risk of Britain leaving the E.U. is probably over-hyped. Even so, for U.S. businesses investing in Europe, the way that the pro-free trade, pro-free markets Brits have marginalized themselves in the E.U. is alarming enough: being outside the Eurozone, they’ve been unable to restrain the destructive austerity of the last five years. They’ve also failed to halt the spread of European paranoia vis-a-vis U.S. tech companies. That may hurt the prospects of the proposed Transatlantic Trade and Investment Partnership over time, with negative consequences for U.S. internet and healthcare firms in particular.

As anyone moving to London for a new job can tell you, the housing market in the U.K. has been dysfunctional for decades, and is getting even more so. The U.K. needs to build 240,000 houses a year to cope with a growing population and the increase in single-person households. It builds less than half that, due to the political cost of rezoning the protected ‘Green Belts’ around major cities, beloved of middle-class voters. Neither of the main parties is addressing the supply issue. Instead, the Conservatives are broadening incentives for buyers to borrow more to meet inflated asking prices, while Labour is threatening to introduce rent controls, which may squeeze some landlords into selling rental properties, but won’t encourage any new ones to be built. Houses are generally Brits’ most important investments as well as their home (and a highly leveraged one at that), so no government can afford the political cost of bringing prices down to a more natural level. In that regard, as with healthcare, Britain will surely be getting the government it deserves next Thursday.

What the bookmakers are saying:

Paddy Power says Labour’s Ed Milliband is 4/6 to be the next Prime Minister, with David Cameron at 6/5 (Milliband is favorite because the SNP is more likely to back a Labour minority government than a Tory one).

This is how spread betting firm Sporting Index sees the 650-seat chamber divvying up as follows (seats needed for a majority: 326):