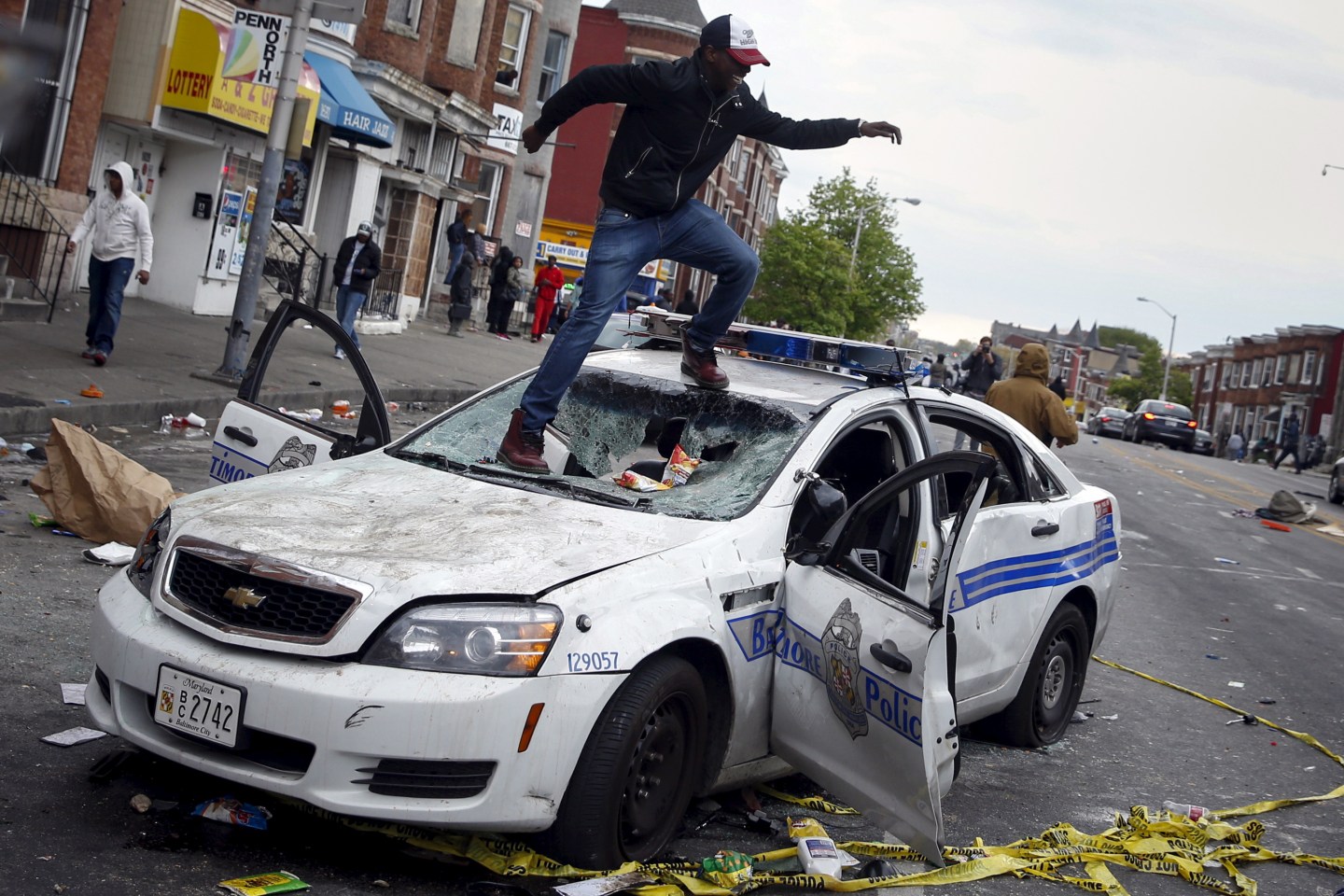 Demonstrators jump on a damaged Baltimore police department vehicle during clashes in Baltimore, Maryland April 27, 2015. Several Baltimore police officers were injured on Monday in violent clashes with young people after the funeral of a black man, Freddie Gray, who died in police custody, and local law enforcement warned of a threat by gangs. REUTERS/Shannon Stapleton - RTX1AJR0
Photograph by Shannon Stapleton — Reuters

As protests and violence continue to rage in Baltimore, Md., one sports executive is defending the actions on the ground even as others rush to condemn them.

After an Orioles broadcaster complained that the protests were keeping people from getting to work, team COO John Angelos, son of the owner Peter Angelos, took to Twitter to defend the anger many people feel, reports USA Today.

You can read the messages in their original form on Angelos’s Twitter (TWTR) page, but here are the comments as transcribed by USA Today:

Brett, speaking only for myself, I agree with your point that the principle of peaceful, non-violent protest and the observance of the rule of law is of utmost importance in any society. MLK, Gandhi, Mandela and all great opposition leaders throughout history have always preached this precept. Further, it is critical that in any democracy, investigation must be completed and due process must be honored before any government or police members are judged responsible.

That said, my greater source of personal concern, outrage and sympathy beyond this particular case is focused neither upon one night’s property damage nor upon the acts, but is focused rather upon the past four-decade period during which an American political elite have shipped middle class and working class jobs away from Baltimore and cities and towns around the U.S. to third-world dictatorships like China and others, plunged tens of millions of good, hard-working Americans into economic devastation, and then followed that action around the nation by diminishing every American’s civil rights protections in order to control an unfairly impoverished population living under an ever-declining standard of living and suffering at the butt end of an ever-more militarized and aggressive surveillance state.

The innocent working families of all backgrounds whose lives and dreams have been cut short by excessive violence, surveillance, and other abuses of the Bill of Rights by government pay the true price, and ultimate price, and one that far exceeds the importances of any kids’ game played tonight, or ever, at Camden Yards. We need to keep in mind people are suffering and dying around the U.S., and while we are thankful no one was injured at Camden Yards, there is a far bigger picture for poor Americans in Baltimore and everywhere who don’t have jobs and are losing economic civil and legal rights, and this makes inconvenience at a ballgame irrelevant in light of the needless suffering government is inflicting upon ordinary Americans.

Orioles fans and employees were personally affected by the protests, which caused the police to stop people from leaving a game on Saturday. The Orioles have since cancelled games on the recommendation of the police.