Did Alexis Tsipras just banish the risk of “Grexit”? 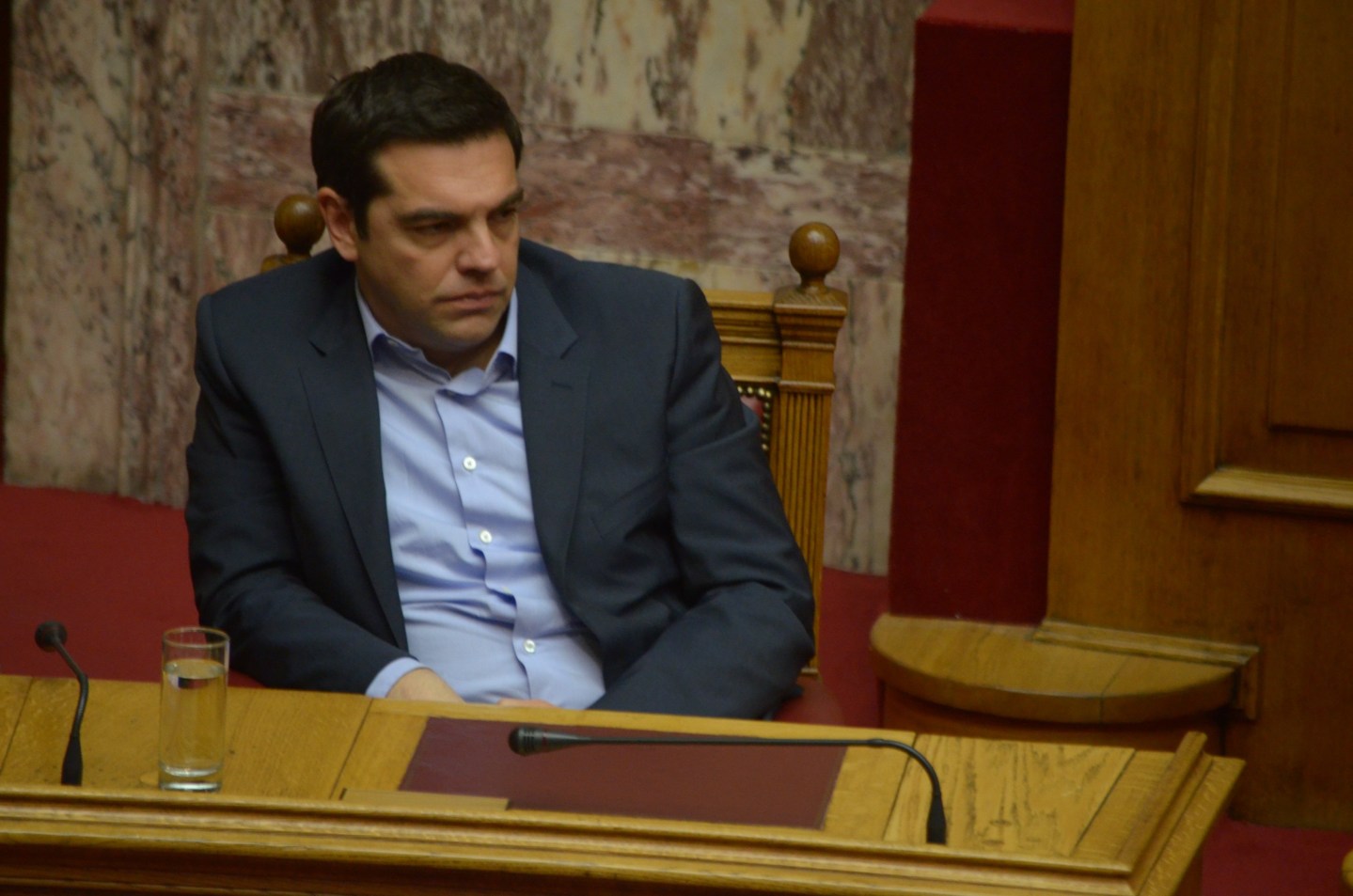 ATHENS, GREECE - 2015/04/17: Prime Minister of Greece Aexis Tsipras sits in the Greek parliament.Greek legislators gathered in the Greek parliament to vote for a new legislation about special security prisons Type C and anti terrorist laws.There was tension between government MPs and the major opposition party about the changes in the laws. (Photo by George Panagakis/Pacific Press/LightRocket via Getty Images)
Photograph by Pacific Press LightRocket via Getty Images

A week ago, if Greece’s Prime Miniser Alexis Tsipras had threatened a referendum over its policy toward the Eurozone, it might have been interpreted as a sign that things were going very badly.

Last night on Greek television, Tsipras made just such a threat, but the markets are loving it. The yield on Greece’s two-year bonds, which would suffer most from a default, have fallen to 20.54% from 30% a week ago, while the local stockmarket index is up 13%.

The reaction makes sense because the government appears to be backing down, rather than preparing to rally support for leaving the Eurozone.

That change of tack (if it really is such) comes after a stormy meeting of Eurozone finance ministers last week in which, according to Bloomberg, Yanis Varoufakis’ colleagues descended to shouting at him, calling him an “amateur”, a “gambler” and a “time-waster” (Varoufakis responded by channeling FDR’s Madison Square Garden speech in 1936, when he railed against opponents of the New Deal).

FDR, 1936: "They are unanimous in their hate for me; and I welcome their hatred." A quotation close to my heart (& reality) these days

Tsipras’ reaction was to clip the wings of his all-too eloquent Finance Minister, putting deputy Foreign Minister Euclid Tsakalotos in charge of talks with the Eurozone, and also replacing an ally of Varoufakis in the working group that runs the technical talks in Brussels. Most importantly, Athens also appears to have stopped blocking access to data for the EU and IMF officials who are monitoring developments.

That adds up to an admission that Varoufakis has failed in his two main objectives: his formal one of drafting a package of alternative reforms that would unlock Greece’s remaining bailout funds; and his informal one of scaring the rest of the Eurozone into an unconditional rescue. The meeting in Riga last Friday proved, if nothing else, that academic bluster hyperbole are no substitute for real political skill (or real control of the purse-strings).

Markets read a lot into the change of personnel. But there is no obvious difference in substance between the two in this address by Tsakalotos to a conference held earlier this year by Ireland’s Sinn Fein (the Irish Republican Army’s former political wing that has had a Syriza-like surge in popularity due to its anti-bailout and anti-establishment rhetoric). If Tsakalotos were essentially taking the same message to the Eurogroup, then it wouldn’t matter how much better he put it across, he’d get the same response as Varoufakis.

Talking to Star TV last night, Tsipras gave a lot of hints last night that that the message, too, is changing. He said Greece won’t default on a €775 ($830 million) payment to the IMF in two weeks’ time, and that he would push through the sale of Piraeus port and the lease of 14 regional airports (according to Reuters), a key bailout commitment.

Tsipras has made conciliatory noises like this before, but they have often been contradicted by go-it-alone moves to roll back some of the bailout reforms.

What makes them more credible this time is his commitment to a referendum. Since being elected, Tsipras and his Syriza party have talked to the world like an economic suicide bomber: ‘Forgive us our debts or we’ll blow you up with us.’ But last night, Tsipras passed the red button to the voters.

“If the solution falls outside our mandate, I will not have the right to violate it, so the solution to which we will come to will have to be approved by the Greek people,” Tsipras said.

That crucial concession comes at a time when the initial wave of euphoric support for Syriza’s government is fading fast. A poll by ALCO for the Proto Thema newspaper at the weekend indicated that 52% of Greeks were dissatisfied with its performance and only 36% would vote for leaving the euro zone if the two sides can’t agree a deal (50% said they would want the government to compromise). Another poll by Kapa Research for the To Vima newspaper said 71.9% would want a compromise and only 23.2% would reject one.

The biggest risk to Greece’s membership of the Eurozone has always been that the far left wing of Syriza would torpedo a deal with the creditors and unintentionally trigger a financial collapse, with uncontrollable consequences. A senior Greek banker told me recently that although accidents can happen, Greeks would NEVER consciously vote to give up the euro. If the ultimate fate of Greece’s Eurozone membership is in the hands of voters rather than a party of romantic Marxists for whom martyrdom is almost as attractive as staying in power, everything looks a lot rosier.

All Tsipras now has to do is deliver. Gulp.