Education tech funding soars — but is it working in the classroom? 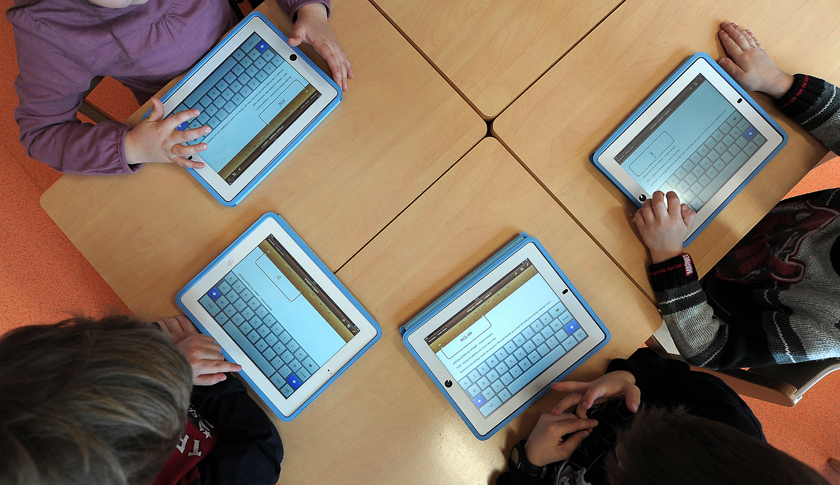 From iPads in kindergarten to virtual classrooms in high schools to online graduate degrees, technology has captured the American education system. As it does, the money keeps flowing in — and so do questions about its impact.

“The education space is attractive because it’s a big and important part of the economy,” said Rob Hutter, managing partner of Learn Capital an education based venture capital firm. “The edtech companies that get funding can be important 50 years down the line, and not just in a few years.”

And it’s a good business to be in, said Bob Sun, founder of online math site, First in Math.

“There’s a high profit margin with no warehouses and not much cost except for research and development,” explained Sun, who also said his firm has grown 20% in each of the last six years and hasn’t needed outside funding.

But while many sing the praises of education technology in the classroom, some question if it’s having the desired effect.

“Education technology is not yet a proven solution for learning, and limits the experience of education and human interaction,” argued Art Langer, academic director and faculty member of the Executive Masters in Technology Management at Columbia University.

The beginnings of education technology have mirrored the advancement of tech itself. As computers got better and faster in the 1960s, colleges like the University of Illinois introduced computer terminals where students could access resources on a course and listen to pre-recorded lectures. By the 1980s many college courses were accessible online at university libraries.

Then along came video conferencing which reached thousands of students. The 1990s and 2000s saw the explosion of the internet and online classes. The National Center for Education Statistics estimates the number of K-12 students enrolled in online distance learning programs increased by 65% from 2002 to 2005.

Add to this smartphone apps, laptops and iPad accesses, and classrooms of all ages have some sort of technology at their fingertips. And at least one study says it’s all for the good.

“It’s also providing alternative ways for students to participate in discussions,” she added.

But some in the field see roadblocks to all the technology that’s flooding the system. One of the biggest areas of concern, among many, is access, said David Liu, COO of Knewton, a learning technology provider that develops platforms to personalize educational content.

“It can heighten the disparity between rich schools and poor schools, putting disadvantaged students even further behind because of lack of access to these tools,” Liu said.

Spending on high tech devices in schools reached $13 billion worldwide in 2013, according to one report, with the U.S. spending more than $4 billion that year on mobile devices alone. Overall education technology spending globally will reach $19 billion by 2019.

However, finding money for the tech tools has not come easily. With many American school districts facing cutback in their budgets, some have turned to bond issues to raise money to keep up with the technology. But that’s not always a solution, said David Levin, president and CEO of McGraw-Hill Education, one of the bigger education tech firms that provides customized educational content.

“Some of the challenges schools have is that devices progress quickly and reach obsolescence before the bond issues mature,” Levin said.

Levin added that schools have to budget for the quality content that goes with the newer devices.

There’s also the issue of teaching. Some research shows that teachers believe the high tech world is hurting students’ attention spans and ability to learn, not to mention making classroom instruction obsolete.

“Education technology can be beneficial but it must meet students’ needs and enhance curriculum and should support, not supplant teachers,” said Randi Weingarten, president of the American Federation of Teachers.

Critics also cite privacy issues for students as well as the lack of sharing immediate data with teachers on how their students are doing. There’s also the emphasis on testing. Some see the increasing amount of testing at various levels--to monitor students’ learning and often rate teachers’ performances—as an outgrowth of education technology.

“We need to modernize our system, but a huge amount of testing is another strike against education technology and not really the best use of the process,” said Paul McGowan, vice president and managing director of the Center of Innovative Technology.

And there’s even the thought that high tech devices might be more of a distraction than a learning tool.

“If you look over the shoulder of any child with a smartphone, they’re mostly not using education apps but playing Angry Birds,” said Kentaro Toyama, professor of community information at the University of Michigan and an international development researcher.

“Why should we expect that more of this kind of technology in and of itself will help our children?” he added.

“Expenditures will continue to grow simply because of the non-stop expansion of available technology in the market,” said Jeffery Bailie, a professor in education management at Kaplan University, the for-profit and mostly online learning college.

And funding for education tech companies will grow as well, said Michal Borkowski, the CEO of Brainly, a social learning network that announced a $9 million funding round last October.

“Raising capital is a lot easier now than in 2009 when we started,” said Borkowski. “There is a lot of competition for the money, but there are a lot of opportunities for investors.”

It all adds up to the potential of a booming sector in the years ahead, according to Chip Paucek, CEO of 2U, a newly public tech firm that provides online degree programs for nonprofit colleges and universities.

“Education tech businesses are providing value for investors,” Paucek said. “And as long as you have high quality outcomes, there will continue to be a market for firms like ours.”