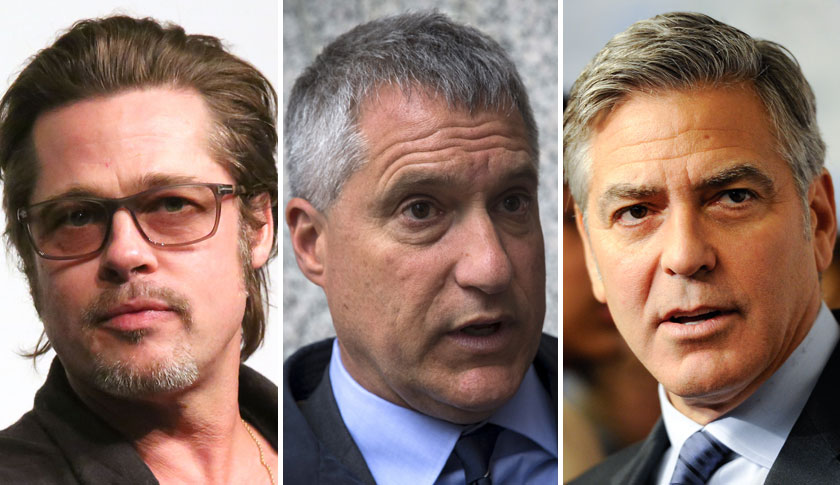 Brad Pitt’s production company has edged out George Clooney’s to win the film rights to a book about the epic, fraud-marred Ecuadorian environmental suit against Chevron (CVX), according to two sources with indirect knowledge of the situation.

The book, Law of the Jungle, by Bloomberg Businessweek senior writer Paul Barrett, chronicles the story behind the 22-year-old-and-counting court battle over pollution in the Ecuadorian Amazon, allegedly left behind by Texaco—bought by Chevron in 2001—when it drilled for oil there between 1964 and 1992. The litigation campaign, largely led by screen-o-genic New York attorney Steven Donziger, culminated in an $18.2 billion judgment against Chevron from a provincial court in Lago Agrio, Ecuador, in 2011, later pared back to $9.5 billion by Ecuador’s highest court.

Barrett’s book, which came out last September, also chronicles the lurid chicanery that led a Manhattan federal judge to rule in March 2014 that Donziger had procured his blockbuster judgment through a pattern of racketeering activity, including bribery, fraud, extortion, obstruction of justice, and other offenses. Among other things, Donziger and his co-counsel are alleged to have ghostwritten the multi-billion-dollar judgment themselves, having obtained that opportunity by promising the trial judge $500,000 to be paid from moneys eventually recovered. (I have previously summarized some of the key allegations against Donziger in this opinion piece.)

U.S. District Judge Lewis Kaplan barred the plaintiffs from trying to enforce the judgment in the United States—a significant step because Chevron has virtually no assets in Ecuador—and issued orders aimed at trying to prevent Donziger from benefiting from his wrongdoing. (Donziger has appealed Kaplan’s judgment, but his attorneys have focused on legal issues and have not, for the most part, contested Kaplan’s factual findings. Donziger has, however, denied personal participation in bribing the judge.)

Barrett sold the option late last summer, though the sale has not previously been reported. In interviews for this article Barrett and his literary agent, Stuart Krichevsky, both declined to confirm (or deny) that Pitt’s production company, Plan B Entertainment, optioned the book. Barrett did acknowledge, though, that an option has been sold to someone, and that the studio that bought it edged out a competing offer from George Clooney’s Smokehouse Pictures, which, he said, had been considering pitching a miniseries to HBO.

“I was very flattered that George Clooney and his producing partner [Grant Heslov] indicated interest in buying an option on the book,” Barrett says, “but ultimately we decided to do business with another very eminent Hollywood production company.” He continues: “I had these two amazing opportunities and had to choose one. So I did.”

Barrett declined to discuss the terms of the sale.

A call to Plan B and emails to its co-presidents, Jeremy Kleiner and DeDe Gardner, were not returned.

Pitt is known to have been interested in the Lago Agrio pollution for several years, and has visited Ecuador with his wife, Angelina Jolie, to observe the situation and meet with Donziger’s team.

In a statement, Donziger’s publicist, Karen Hinton, said: “At this point, neither Brad Pitt nor his production company own the rights to the story of any of the key participants in the lawsuit, including Steven Donziger, Luis Yanza, Pablo Fajardo, and others. There is simply no way any production company can make an accurate and compelling film about the Ecuador pollution lawsuit without these rights.”

Donziger has sharply attacked Barrett’s book and a nearly contemporaneous ebook, Crude Awakenings, written by American Lawyer senior international correspondent Michael Goldhaber, alleging inaccuracies and bias. Donziger mounted those attacks, which I have assessed here, even though both books are highly sympathetic to the plight of his clients—the residents of polluted region—and Barrett’s book was receptive to a great many of Donziger’s legal and factual contentions.

In Barrett’s case, Donziger also wrote what he characterized as a “notice of defamation,” which he sent to Barrett’s publisher, Crown Publishers, and then disseminated publicly. Donziger even caustically criticized New York Times columnist Joe Nocera for merely writing a column cautiously recommending Barrett’s book. (Donziger has also denounced my own writings as “dishonest” ever since September 2010, when I wrote that “credible and weighty allegations of fraud” had been leveled in the case as it stood at that point.)

A third book about Donziger’s handling of the Lago Agrio case was also written last year: Judge Kaplan’s 485-page, 1,842-footnote opinion in Chevron v Donziger. But Kaplan’s work is in the public domain, so no studio need court him for rights.

Two notes of caution. First, actors’ production companies very often make films that do not star the proprietor-actors’ themselves. Pitt’s Plan B, for instance, was among the producers of last year’s Oscar Best Picture nominee, Selma, and the HBO movie The Normal Heart, neither of which starred Pitt.

Second, and more important, it’s well known that most optioned properties are never actually made into movies.

Still, given Pitt’s longstanding interest in the case, the wrenching emotional and moral issues raised by it, the historic legal landmark it once seemed to represent, the jaw-dropping accusations of skullduggery and corruption that have marred it, and the visually stunning setting in which it has played out, this particular narrative seems truly destined for the screen.