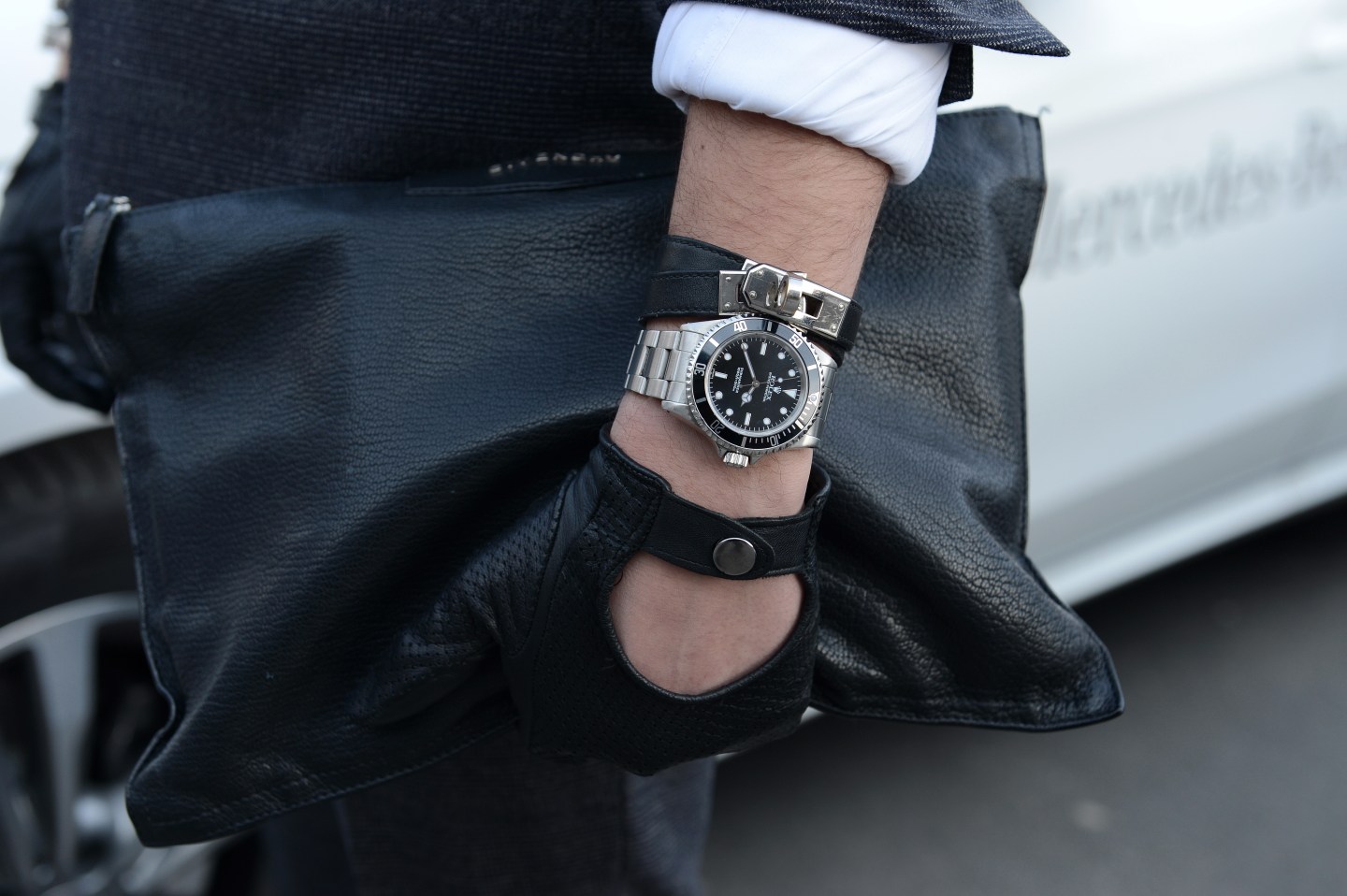 Bags intended for men make up nearly a fifth of the luxury handbag market, according to the market intelligence firm Euromonitor, and those numbers are rising. The value of these bags is projected to top $8 billion by 2018.

Ralph Lauren makes a $22,000 alligator attache. Louis Vuitton sells a $2,780 canvas men’s backpack emblazoned with the label’s monogram print, and pricier backpacks are sold by Valentino ($3,695) and Fendi ($5,000). There are clutches, dubbed folios, and even a $300 version of that most disparaged of satchels, the fanny pack, is sold by WANT Les Essentiels de la Vie.

Clearly, these aren’t your dad’s briefcases–they tend to serve multiple purposes as users commute, go through their work day, transitioning into evening activities, and some can also serve the user for overnights.

Despite the temptation to call them “murses,” such hybrid, multipurpose bags are not just for women. They are used to carry the necessities: wallet, technology, a charger or two, papers, a book or magazine, keys, mints or a toothbrush and toothpaste.

Functional or not, it can be hard for some men to take the plunge. Before picking up his Coach model at an outlet store, Minneapolis PR professional David Hlavac says, “I had coveted a man bag for years. I’ll admit I was worried for a while about what others would think, and there certainly is a stigma attached to man bags (I actually call mine a “purse” or a “man purse.”) But it dawned on me–I’m 43 years old and, beyond cultivating a professional appearance, I have little concern for other people’s judgment of what I wear or how I accessorize. That was perhaps the hardest part for me– putting aside the stigma.”

For those with reservations, that discomfort around wearing a bag can depend on its style. “Something I strive to avoid when choosing a man bag is that it look like a purse,” said Paul Cram, a Minneapolis-based actor who primarily gets around by bicycle, so he uses a messenger-style bag from Relic. “I like messenger bags, but really wish more manufacturers would design some man bags that mimic single shoulder bags. Unfortunately, these usually look too feminine for my tastes, though the functionality of them is preferable to how I use them.”

Others have no issue carrying a tote, like designer Tak Hau, whose favorite brands are Prada and Bottega Veneta and says he would pay up to $3,000 for a bag. “I’m not sure why there’s such a hang-up on men using a bag. It’s practical, it keeps daily life organized, and it’s certainly convenient to have important things with you at all times.”

Simon Spiteri of the luxury online store for men Mr.Porter points to the rise of the casual CEO as one contributing factor in the rise of this market, and told the Wall Street Journal, “We’re moving away from the businessmen’s hard briefcase.”

Indeed, Ryan Keeton, co-founder of the tech startup Carvana carries a $2,000 Ghurka Leather Weekender, chosen for its durability and practicality–with a slightly bigger than he would like to admit focus on style. He carries it to meetings, and it also functions as a carry-on holding the essentials for his frequent overnight business trips. He said that he wanted a bag that could handle the sophisticated class of New York investors as well as the more relaxed appearance of Silicon Valley. When he’s home in Phoenix, it tends to get filled with diapers and other kid stuff.

Perhaps because it’s something that can be costly and is used so often, men described their bags fondly or even passionately. And while no one stepped forward as a wearer of the whale-shaped bag, looks do matter. “I hate bags. I hate to carry anything with me,” says restaurant consultant Sam Firer. “And then I stumbled over this little cute thing [a Herschel Supply Clark Messenger bag]….in waterproof plaid….and it was just about enough of what I needed: two outside pockets, a few inside–not too many–cheery, light and waterproof!.” He said, “Style and appearance are considerations #1 and #1. I want something a bit different, something that can segue from morning into night, casual to business-like. And a bit evergreen, with no obvious style expiration date on it.

“So yes, I caved in; got myself a man bag, but I draw the line at Euro man bags and pouches: I’d rather be dead than be caught wearing one.”

“I think men have to be a little daring to choose something more modern than a traditional briefcase,” said Glenn Johnson, principal at ICONS Marketing + Media in New York City. “I feel a little sad when I see a young business guy on the subway with his ‘safe’ Aldo shoes and Kenneth Cole Reaction black bag–it’s like they only made ONE style I see everywhere! I’m not one to be too ostentatious or fashion-forward, so I don’t suggest the racier brands (I have a producer friend who carries around a Givenchy bag, and it works for him), but there’s plenty of reasonable and fashionable choices a guy can make today.”

It seems that for many, using a man bag became the norm a while back, it’s just that there weren’t so many luxury runway pieces before. Christopher Davis, a Washington, D.C. media relations manager, carries a $400 Billykirk Schoolboy Satchel of brown waxed flesh leather (inspired by the satchels and medic cases of WWII Europe) but said he would pay up to $1,000 for a bag. “I couldn’t live without my bag. When I find out someone doesn’t use one, I always ask them, ‘Where do you put your stuff?’”