Publishing discovers the age of disruption 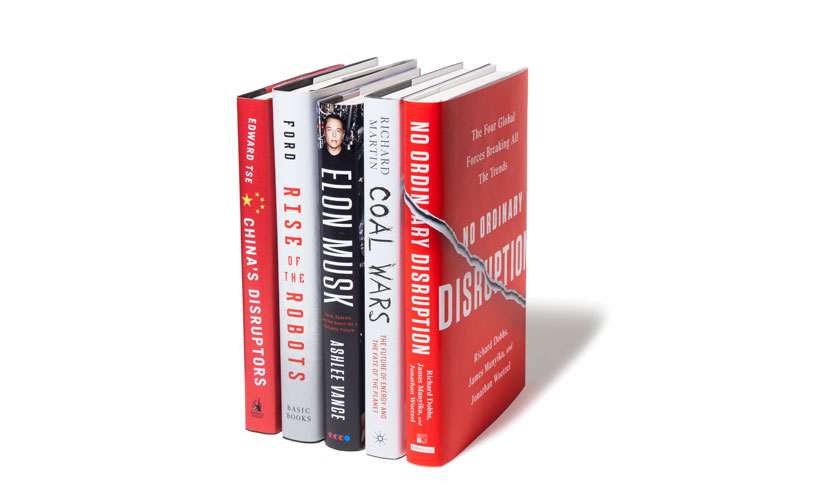 This season, as more billion-dollar businesses pop up seemingly overnight and more old-economy fortunes fade into irrelevance, a host of upcoming titles are dedicated to depicting the landscape that disruptive innovation hath wrought. Here, some predictions from the ­hottest releases about what to expect next.

For years, state-­sponsored development was the driving force behind an emerging China. But Tse argues that it’s the country’s 12 million privately owned firms (four times the number a decade ago) that will ultimately change how the world does business. ­Entrepreneurs like Ali­baba’s Jack Ma, Tencent’s Pony Ma, and Xiaomi’s Lei Jun represent the first in a coming wave of ­internationally ­influential private-sector companies that will drive innovation, shift the order of world politics, and lead global markets.

Rise of the Robots: Technology and the Threat of a Jobless Future
May 5, 2015
By Martin Ford

Think you’re too creative to be replaced by a machine? Probably not, says Ford, who warns that artificial intelligence is supplanting humans even in routine-resistant professions like journalism, music, research, and more. In the coming age of robots, Ford’s ideal outcome would be a world where people earn a guaranteed wage and machines do all the work. The alternative, he says, is inequality on steroids.

Elon Musk: Tesla, SpaceX, and the Quest for a Fantastic Future
May 19, 2015
By Ashlee Vance

In his roles as CEO of Tesla and chair of SolarCity, arguably no one else has moved the needle on green technology as much as Musk—or made as much money doing it. But those projects are secondary to the undertaking that Vance says is Musk’s main focus and most remarkable achievement: SpaceX. The spaceflight company is working on a rocket Musk thinks will land on Mars by 2026. Vance believes it could happen.

Coal Wars: The Future of Energy and the Fate of the Planet
April 14, 2015
By Richard Martin

The “end of coal” is now a foregone conclusion, Martin says. With increasing government regulation and the sinking cost of other fuels, the question is no longer if coal-fired plants will be phased out, but when. The stakes are high: Coal accounts for 44% of global carbon dioxide emissions and is wreaking environmental havoc. If consumption isn’t dramatically reduced within the next couple of decades, Martin writes, it could be “game over” for the climate.

No Ordinary Disruption: The four global forces breaking all the trends
May 12, 2015
By Richard Dobbs, James Manyika, and Jonathan Woetzel

In this book, directors at the McKinsey Global Institute pinpoint four major shifts they believe will change the way the world economy works: the aging global population, rapidly emerging markets, the freer flow of world trade and migration, and the breakneck pace of technology. The authors also look to advances in 3-D printing, energy storage, and autonomous vehicles to upend the existing business order.