‘The Force’ is strong with Nippon’s R2-D2-themed plane 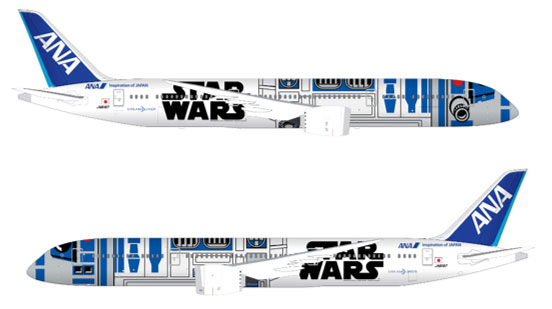 The flashy-looking jet takes to the air one day after the release of the latest teaser for Star Wars: The Force Awakens, which will be released this Christmas. The new trailer was shown during a panel for the film at the Star Wars Celebration fan expo.

The U.K.’s Telegraph newspaper reported that the similarities don’t just stop at the uncanny resemblance to R2-D2 on the outside. According to the article:

The side of the Boeing 787 Dreamliner is emblazoned with “Star Wars” in the font used in title sequences to the films, while the cockpit and fuselage are decorated with blue panels and stripes to mimic the helpful robot’s white and blue colour scheme. It helps that ANA’s colour scheme also incorporates blue.

The article also discusses the paint design used on the plane:

Minor details of R2-D2’s look are also replicated on the jet’s paint job. On the right side of the cockpit there is a red circle from which the droid would fire a laser beam, along with a representation of the extending lense, which he uses to see. Above the cockpit windows there is a version of the black dome from which R2-D2 projected a hologram of Obi-Wan Kenobi.

Meanwhile, a new robot character, BB-8, was unveiled at the Star Wars Celebration event. The company in charge of its movement, Sphero, got a boost from Disney (DIS) CEO Bob Iger, according to this Fortune article.

Here’s a video of the Nippon R2-D2 plane: