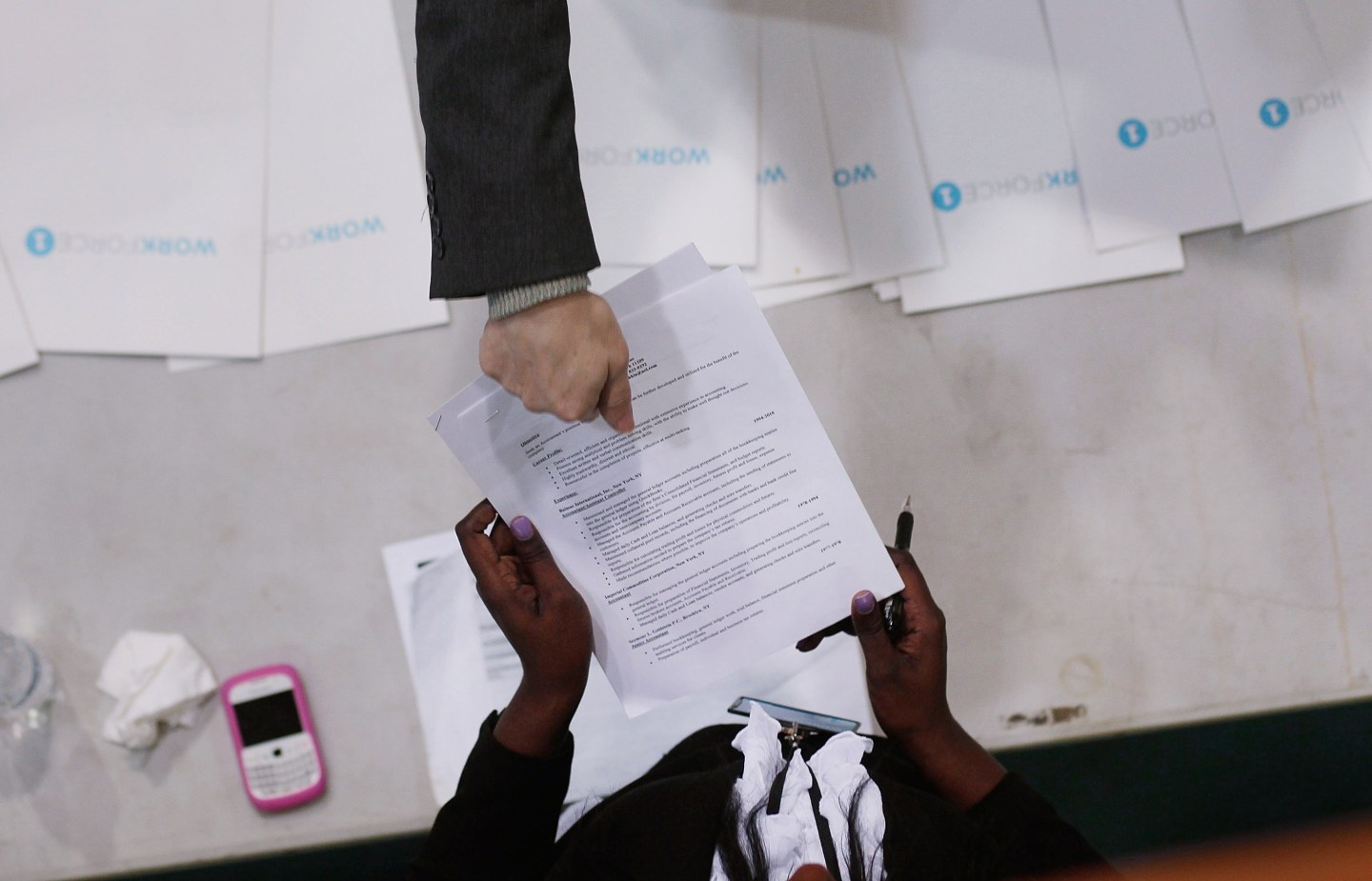 NEW YORK, NY - JANUARY 18: A job-seeker (top) hands his resume to Candice Perkins, a representatvie of Workforce1, an city-sponsored employment agency, during a "Work Search" event aimed at older unemployed people January 18, 2011 at a high school gymnasium in the Harlem neighborhood of New York City. The event, sponsored by the American Association of Retired Persons (AARP), consisted of workshops for basic job skills like resume building targeted to an over-50 job seeking demographic. Unemployment for older worker has decreased slightly in the past year, though rates are still three times higher than they were a decade ago, when only 2.5 percent of people over 45 were jobless. (Photo by Chris Hondros/Getty Images)
Photograph by Chris Hondros — Getty Images

Some upbeat news for older workers looking for a fresh start: It is easier than you think to launch a second act—if you make the right moves.

The findings fly in the face of stereotypes about older workers and their ability to find new jobs. It’s true that when older workers lose their jobs, it takes longer to find one. But many older people are in fact fully employed. The unemployment rate for workers 55 and older is less than 3.7%, compared with 5.5% for the national average.

And the number of older people working is growing: The percentage of people 55 and older in the labor force is more than 40%, up from 29% in 1993, according to the Bureau of Labor Statistics.

The report is encouraging because an increasing number of older workers say they want to or need to work past traditional retirement age, but they don’t want to continue to do the same thing. Many are looking for a change and a new challenge, as well as less stress.

The findings back up another recent survey by the AARP Public Policy Institute that was positive about older workers’ ability to make a career change, even those who had been unemployed for a while. The survey focused on workers 45 to 70 who had been jobless at some point in the last five years. Almost two-thirds of reemployed older workers found jobs in an entirely new occupation.

Of course, some of the unemployed didn’t choose to switch occupations; they were forced to do so by layoffs or changes in their industry. But for others, the change was a decision to do work that was more personally rewarding and interesting, or just less demanding with fewer hours.

It makes sense that pursuing a new career is a viable option for older workers, says Adams. “Older workers tend to have more experience and stronger networks, which they can leverage to make that transition.”

The AIER research found distinct patterns among those career changers who were successful compared with those who tried but didn’t make the leap into a new field or occupation. In some cases, workers remained at the same company but in a new role. For others, they changed where they worked, their occupation. and/or their field. Here are some lessons from the successful career changers.

Identify and capitalize on your transferable skills. The people who were successful assessed their skills and figured out how their job experience could apply to a new occupation. In some cases, changers took courses or additional training to hone those skills or develop new ones. But additional education wasn’t necessarily a hallmark of successful career changers. Many people become trainers in their field, consultants to their old firms, or teachers in their field of expertise. Others used their knowledge to launch a business. In one case, a medical school administrator left academia after 22 years and started his own business of freestanding clinics. In another, a truck mechanic who already had much of the required licensing started his own hauling business after taking seminars on relevant regulations.

Be realistic. People who weren’t successful tended to be those who wanted to leap into an entirely different line of work. It sounds great to open a restaurant or buy a vineyard, but it’s much harder to pull off. It’s a bigger risk financially, and your network of contacts will be less relevant. “The notion of ‘follow your dream’ is a wonderful sentiment, but you have to have a clear-eyed vision of what you bring to the table for your employer or a new venture,” says Adams.

It’s not good to be a lifer. Successful job seekers spent fewer years at the same employer and worked in a variety of roles for different companies over their lifetime. The longer you’ve been working, the more likely it is you’ve held several jobs, so the job-changing experience isn’t so new. But if you’ve been stuck in one job a long time, it’s going to be harder to make a transition.

Enlist family and friends. The most successful career changers said family support was important. That means having encouragement from friends and relatives, and a willingness for family to change their lifestyle to accommodate a different career. Successful career changers also asked for feedback from colleagues, friends, and family members about their aspirations. “People who were successful had encouragement and honest feedback from people who knew them well,” Adams says.