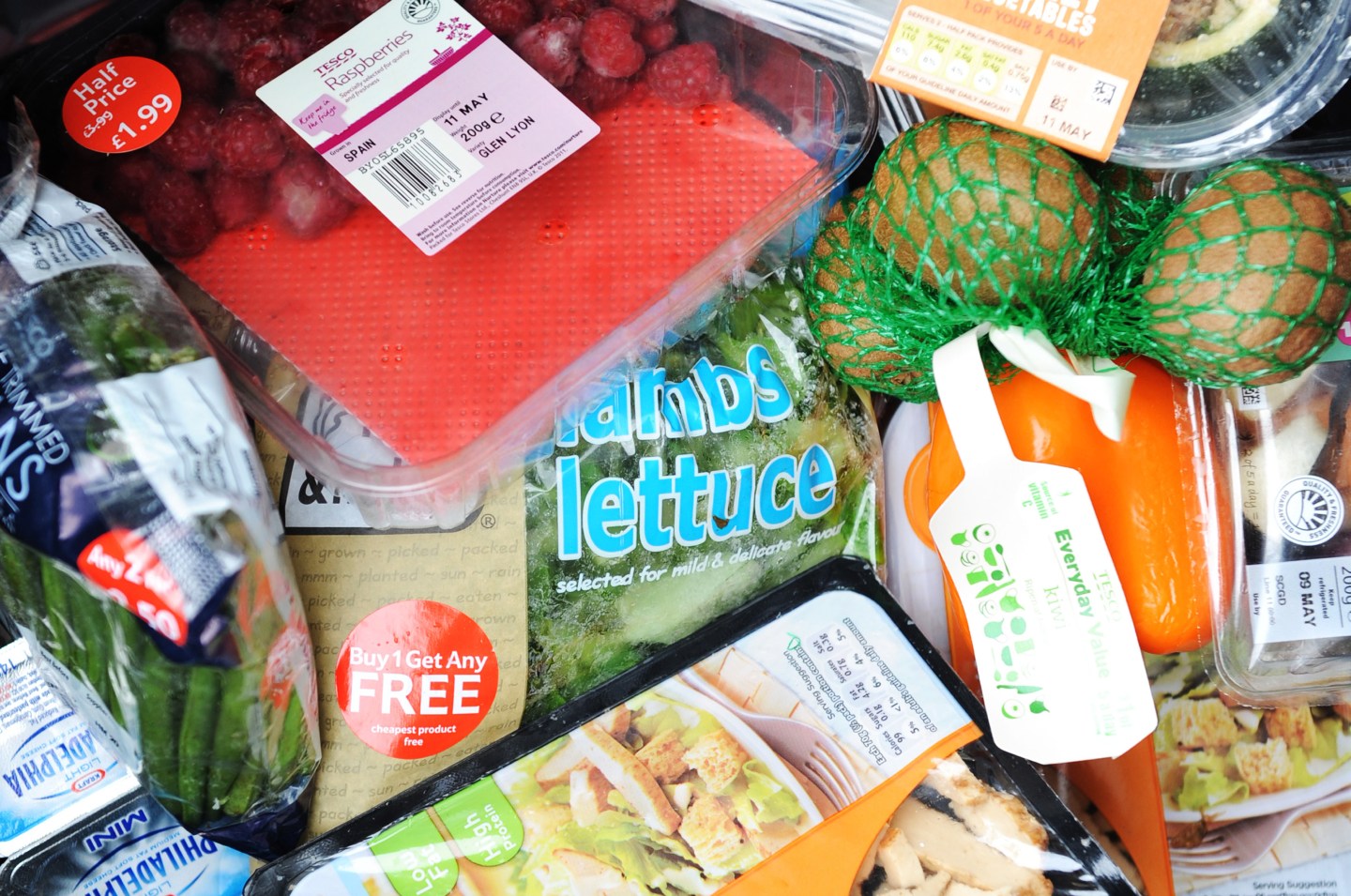 Food waste. File photo dated 20/05/12 of out-of-date and unopened food from a domestic household thrown away in a dustbin as supermarkets should move away from offers such as "buy one get one free" to help end the "morally repugnant" waste of millions of tonnes of food, a House of Lords committee has said. Issue date: Sunday April 6, 2014. The Lords EU Committee also said big retailers should stop cancelling orders of food from farmers after the produce has been grown, a practice which leads to edible food being ploughed back into the fields. See PA story POLITICS Waste. Photo credit should read: Nick Ansell/PA Wire URN:19488843
Photograph by Nick Ansell — PA Wire/AP

As hunger continues to be a serious global challenge, food is the most-wasted resource in America. An estimated 35 million tons of food were thrown away in 2012, and that amount has been continually rising.

There are so many ways of battling this multi-headed problem, from government programs to traditional soup kitchens and food pantries, to organizations like Hunters for the Hungry that donate game meat to hunger charities.

But still too often, edible food is thrown away, just due to a lack of knowing who to give it to, or donation regulations. However, technology is helping make a dent in all that hunger and waste. Mobile apps are perfect for making those timely connections and facilitating donations. Here are 6 ways apps are doing precisely that, and all can be used by individuals as well as restaurants, farms, groceries, and truckers.

Waste No Food is a nonprofit founded by Kiran Sridhar, a 12th grader in the San Francisco Bay Area, to create an online marketplace to reduce the vast amount of food that’s wasted daily by farms, restaurants, and grocery stores. Using the app, that food can then be claimed by nearby food pantries, homeless shelters, and other qualified charities.

Numerous other apps are acting the middleman with the same purpose: Feeding Forward (also in the Bay Area, but this one also allows volunteers to register to help deliver the food from the donor to the recipient), and Zero Percent in Chicago.

“When a delivery gets rejected, it’s a whole lot easier to find a dumpster than a food bank – especially in the middle of night hundreds of miles from home.” The issue described on the Food Cowboy website prompted produce trucker Richard Gordon to come up with his solution, an app that allows truck drivers to quickly report what they have, find a charity that’s nearby or on their route, and if not a farm or compost site, so at least the food won’t end up in the landfill. They also provide the paperwork for tax benefits. Food Cowboy is now also working with retailers to manage food donations, as in the category above.

The AmpleHarvest.org Campaign has an app to help anyone with a surplus–be it a gardener with too many tomatoes or someone who spotted a great sale on canned goods–connect with local pantries who need what they have. Offering an even more personal service, the Leftover Swap app facilitates person-to-person giveaways of meal leftovers or unwanted food items–the smartphone equivalent of the old school cafeteria “up for grabs” yell while holding up a Twinkie or a sandwich in a baggie.

Although the practice is regularly mocked, two apps provide reasons to encourage posting food pictures on the Internet. Feedie (“Share food. Literally.”) makes a donation to school children in South Africa for every meal photo from participating restaurants nationwide that are shared on Instagram. The app is sponsored by the nonprofit Lunchbox Fund and has spokes-chefs like Jamie Oliver, Mario Batali, and Peter Tempelhoff, and the app in combination with donations has so far shared more than 12 million meals.

FoodShareFilter is an Instagram filter with the motto, “If you are going to share your food, share it for real,” with proceeds from the app ($1.16 for Android, $.99 iPhone) donated to Manos Unidas, a hunger charity in El Salvador. The model depends on social sharing to get traction, so the filter applies a frame with the motto, website URL, and hashtag #FoodShareFilter to users’ food photos.

The TangoTab app offers free deals on food and drink at restaurants (say, a free appetizer, or 50% off drinks) while donating a meal for every deal a consumer uses, so diners can help feed others when feeding themselves. By donating through local hunger-related charities, the says it has fed over 830,000 hungry people. The company was started in Dallas in 2012 by Andre Angel, and is active in a limited number of markets including Dallas, Fort Worth, New York, Hoboken, Chicago, Oklahoma City, and Los Angeles. Restaurants working with TangoTab pay a fee when customers redeem their deals.

Slightly past fresh baked goods that are still perfectly edible are sometimes offered in a basket or in bags in some corner of the local bakery, but PareUp is a way for New Yorkers to reduce waste by finding and buying those unexpired foods at a deep discount before they get thrown away. For the participating food retailers, these offerings (also including end-of-day hot buffets, salad bars, and yesterday’s wrapped sandwiches) can’t be donated to pantries either due to food safety regulations, or else because they aren’t a large enough amount to qualify for pickup. PareUp was launched in August 2014 by Margaret Tung, Jason Chen, and Anuj Jhunjhunwala, and the app is free, but it takes a small fee from each transaction. They have plans to expand to a dozen more cities this year.