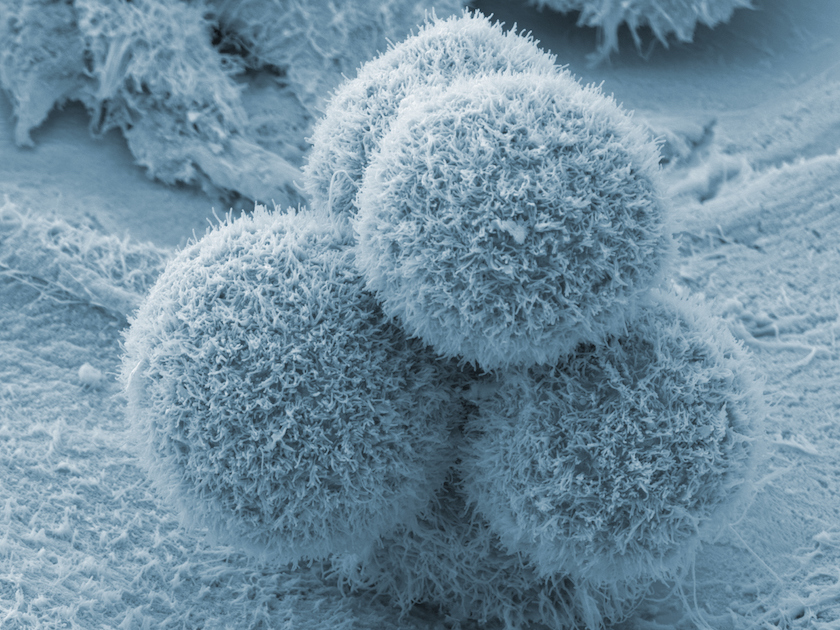 Close up of pancreatic cancer cell
Photograph by Getty Images

Could we be just two or three years away from curing some forms of cancer? Niven Narain, the president of Berg, a small Boston-based biotech firm, says that may very well be the case.

With funding from billionaire real-estate tycoon Carl Berg as well as from Mitch Gray, Narain, a clinical scientist by training, and his small army of scientists, technicians, and programmers, have spent the last six years perfecting and testing an artificial intelligence platform that he believes could soon crack the cancer code, in addition to discovering valuable information about a variety of other terrible diseases, including Parkinson’s.

Thanks to partnerships formed with universities, hospitals, and even the U.S. Department of Defense, Berg and its supercomputers have been able to analyze thousands of patient records and tissue samples to find possible new drug targets and biomarkers.

All this data crunching has led to the development of Berg’s first drug, BPM 31510, which is in clinical trials. The drug acts by essentially reprogramming the metabolism of cancer cells, re-teaching them to undergo apoptosis, or cell death. In doing so, the cancer cells die off naturally, without the need for harmful and expensive chemotherapy.

So far, Berg has concentrated most of its resources on prostate cancer, given the large amount of data available on the disease. But thanks to recently announced partnerships, the firm is now building a new model targeting pancreatic cancer, which is one of the deadliest forms of cancers with a survivorship rate of only 7%.

Ambitious as that may be, it is really just the tip of the iceberg. In addition to mapping out prostate and pancreatic cancer, Berg hopes to analyze data from a whole host of other diseases, including breast cancer. Additionally, Berg thinks his company’s artificial intelligence platform can also revolutionize drug testing by creating individualized patient-specific treatment options, which he believes will ultimately reduce the risk of adverse drug interactions in clinical trials and hospitals by a significant degree.

I sat down with Berg and Narain to discuss how the company works and what they hope to accomplish in the next few years. The following interview has been edited for publication.

Fortune: Carl, why did you decide to move from real estate into healthcare and has it panned out like you thought it would?

Carl Berg: I have been in the venture capital business for 40 years but I never once touched biotech because I was concerned about the risk associated with government approval – it’s bad enough when you’re doing venture capital but adding one more equation, like getting approval from the FDA [Food and Drug Administration] makes it a lot harder. But about eight years ago I said, instead of getting into a whole bunch of small companies, I am in a position now where I can do something really big in a hope that it changes the world. So that’s what motivated me, and then I met with Niven, and that’s what got it started.

Did Niven convince you to go into biotech or did you find Niven?

CB: I was considering a skin care product investment and I was introduced to Niven at the University of Miami. Niven was the project manager and about a couple months into work on this product, Niven called me and said “Carl, this skin care product appears to have an effect on cancer.” To which I said “Sure, whenever you cure somebody, let me know.”

CB: Everybody knows that every cancer is different, so how could this one thing work? That didn’t make any sense to me. And Niven said, “Can I fly out to California and show you my results?” And he came out, and we talked, and I got convinced that the technology he was using and the approach he was taking, could revolutionize the pharmaceutical market.

Niven, what did you say to convince Carl Berg that your work on skin cream could possibly lead to a cure for cancer?

Niven Narain: When I met with Carl we were aligned philosophically that there has to be a better way to create a more efficient healthcare system – one that really matches the right patients to the right drugs in a very precise manner. So Carl supported taking this concept to the next level. Instead of treating humans with chemicals, that are screened to become drugs, we actually started with human tissue samples and work to understand the biology and develop drugs based on that. Using AI [artificial intelligence] instead of hypotheses.

How exactly does artificial intelligence come into play here?

NN: When you start with a hypothesis, you are dismissing a lot of other areas that might actually have an impact on whatever you are trying to figure out. How many times do we see drugs get to late stage trials and fail because the early science either wasn’t robust enough or focused on the wrong target?

At Berg, we use AI to create over 14 trillion data points on only one tissue sample. It is actually humanly impossible to go through all this data and use the traditional hypothesis inference model to glean any value out of all of it. So early on when we built what we call an interrogative biology platform using AI to go through all that data. AI is actually able to take all the information from the patient’s biology, clinical samples, and demographics and really categorize which ones are similar and which ones are different and then stratify those in a way that helps us understand the difference between the healthy and diseased.

NN: So there are two components: the upfront biological and there is something called omics. We go much deeper than just analyzing the genome, we look at all the genes in that tissue sample, all the proteins, metabolites, lipids, patients records, demographics, age, sex, gender, etc. We combine the 30,000 genes in the body with about 60,000 proteins and a few hundred lipids, metabolites. Then we take those components and subject them to high order mathematic algorithm that essentially learns, uses machine learning, to learn the various associations and correlations.

Omics – it’s a fairly new term. It means you’re going beyond just the genome. It means all the omics – proteomics, metabolomics, and proteins. So we may be born with 30,000 genes, and those genes were born with certain mutations, but that’s not the end of the story. You live in New York City, you are exposed to different things in the environment, your diet is different than someone who lives in Alabama and your sleeping habits are different from some who lives in Utah. We believe all of these things have to be put together to tell the whole story of your omics – the full profile of you.

But how does all of this get us to a cure for anything? Seems like a bunch of number crunching.

NN: I know you cover the airline industry pretty intently, so you are probably familiar with those airline route maps that show all the connections between hubs cities and destinations. So with the interrogative biology platform, the result of all that number crunching looks similar to a 3D version of those maps. But instead of those connections going between cities, they are going between genes and proteins. We then focus in on the big hubs and see what, if anything, is wrong. For example, in a system, if Dallas is in Oklahoma, obviously we know something is wrong, so the AI helps to push Dallas back into North Texas, and analyze what events happened in the biology to make that a normal process again. This is what we focus in on. The elements within the biology, the genes and proteins that made that a healthy process again.

Have you had any success using this platform in a real world situation?

NN: We are in clinical trials for a drug, BPM 31510, which we developed using the interrogative platform. The results we have seen so far have been very encouraging. The platform predicted that the more metabolic, the better the treatment will work. And that is exactly what we are seeing in patients for certain types of cancer. For example, we tested this on a patient who had bladder cancer. It was a very aggressive cancer, which failed to respond to all other therapies. We then put him on BPM 31510, which targeted the metabolism of the cancer cell, and by week 18, the tumor was completely gone.

Is this a patented process?

NN: We spent the lion’s share of the first six years building the platform, developing it into various areas of focus, getting our early drugs into clinical trials and diversifying the use of the technology. And we have filed over 500 patents around the world that govern this specific elevated biology. So we have patents on the biological process, on the mathematics, the informatics, on each individual candidate biomarker, and drug targets. It is a very robust IP portfolio.

Who are your competitors and where are you versus them in taking this process to the next level?

NN: We get asked that fairly often. There are folks and entities that do pieces of what Berg does. They’re leading companies focused on proteins or analytics, but there isn’t one company we can identify or know of that has taken the biology, the omics, the clinical capability and put it all into an interrogative platform to really allow for a robust understanding of the biology to discover drugs in a different way. Also, we are allowing the data to generate hypotheses instead of hypotheses generating data, so it’s a really different approach. We are fairly unique in that respect – both from a technology, but also from a commercial standpoint.

Carl, for the last few years, you and Mitch Gray have been the only investors in Berg. How come?

CB: I’ve learned that if you get too many people in the early stages of these things, especially within something as risky as this was, basically you have failed because people get upset and they get worried when anything goes wrong. Through all the years that I have been doing this I can kind of roll with the punches. If something goes haywire it doesn’t upset me that much. I know that’s what you’re going to expect.

Are you ready to open things up now?

CB: We are definitely planning on doing some other things and bringing in other investors, but we thought we ought to get to a certain point before we did that. I think we are now very close to that point.