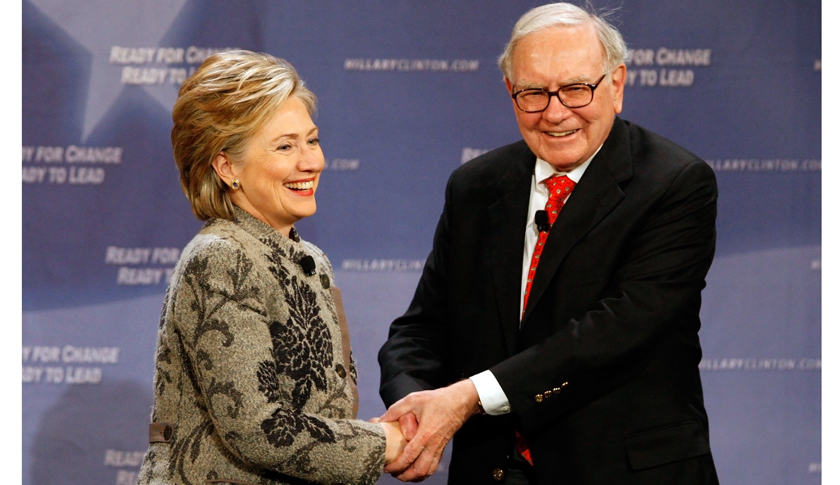 Now that Hillary Clinton has announced her bid for President in 2016, the banking industry, which generally favors the GOP and funded the party heavily during the last midterm elections, will likely start campaigning against the former U.S. senator and secretary of state.

And as Wall Street-ers point to various reasons for why Clinton would be bad for the White House, they would actually be wise to back her instead. Here are four reasons.

Republicans are getting kind of populist

First, there is the lesson of the 2012 elections, in which the GOP candidate Mitt Romney received widespread support from Wall Street but was unable to win. Despite starting out as a moderate, Romney was forced to the far right by the Tea Party, which confused and alienated many voters.

A similar fate could befall the presumptive Republican candidate for 2016, former Florida Governor Jeb Bush. Bush is running on what comes off as a populist platform for 2016. Just take a look at his newly-created political action committee, Rise to Rise, which defines income inequality as a core economic problem.

His past, however, indicates a more conservative core, as pointed out by the Huffington Post; at the same time, he’s viewed as being too soft by hardline conservatives. At best, this could leave him without a solid base to count on, and at worst, force him to the far right a la Romney to court conservatives, which could alienate progressives, independents, and even some moderate Republicans.

Other GOP candidates like Texas Sen. Ted Cruz, Kentucky Sen. Rand Paul, and Florida Sen. Marco Rubio are also facing challenges. Cruz and Paul are tainted by their libertarian roots that many outside the Tea Party see as a red flag, and lack foreign policy experience. Rubio has a more mainstream image but his flip flop on immigration reform could lose him the very Hispanic base that he needs even if it wins him some grudging support from hardliners in the GOP. Like Bush, he could easily find himself in the middle of nowhere.

From a purely cost-benefit standpoint, that means Wall Street would be wasting its money backing a Republican.

Hillary Clinton may be hating on excessive CEO pay, but she has business-friendly credentials

While some in the banking community might bristle at Clinton’s recent words about excessive CEO pay, they need to recognize two things:

First, growing income inequality can threaten the economy and Wall Street as well. Stagnant wages, other than being a disincentive for average workers, also lead to less consumption as lower income earners, who tend to spend a larger portion of their income than the rich, struggle to make ends meet. Many analysts, as well as French economist Thomas Piketty and billionaires Warren Buffet and Bill Gates, view the long-term impacts of inequality as being harmful to economic growth.

Clinton’s foray into this arena may be driven by political pressures from her own party, but it is the right choice from every perspective. It’s also worth noting that even former Republican President George W. Bush came out publicly against lavish salaries and perks for executives, so Clinton’s stance is not unprecedented or necessarily partisan.

Second, the Clintons are well known for being pro-business and Hillary Clinton would likely work with businesses to find solutions to this complex problem instead of against it. The need to court the popular vote may push her slightly further to the left, but there’s no reason to believe that she will not continue to be business friendly.

That’s not to say that the Clintons’ philosophy hasn’t produced some problems of its own. It can be argued, for example, that former President Bill Clinton’s refusal to monitor the derivatives market more closely and the lowering of lending requirements for homeowners laid the foundation for the subprime mortgage crisis a decade later. But having lived through that experience, Hillary Clinton has hopefully learned to walk the regulatory line more prudently.

Also, her ability to balance individual and business priorities will be crucial to preserving the hard-won economic recovery of the last few years.

It’s true that Hillary Clinton has been bruised by the Benghazi affair and now the controversy over her use of a personal email account to conduct State Department affairs, but that doesn’t detract from her foreign policy experience — both as First Lady in her husband’s administration and then as Secretary of State.

Most relevantly for Wall Street, she knows China and India.

As China’s economy shrinks and a variety of monetary and cyber threats to U.S. business from the region escalate, there is an urgent need for a new framework of economic cooperation between the two nations. While historically critical of China, especially on the topic of human rights, Clinton is nonetheless focused on ushering in a new era in the U.S-China relationship, as a column in Bloomberg has noted. A 2014 policy paper written by former advisors to the Clintons offers clues to Hillary Clinton’s future policy towards China, according to Quartz, and signals a shift in her thinking about the region.

The strategic and economic importance of China to America’s economy cannot be underestimated and Clinton’s direct experience with the region in the last few years gives her an edge over every other candidate in this respect.

Similarly, India’s fast-growing economy offers a sizable opportunity for U.S. businesses and investors and requires deft handling of diplomatic relations to open up that emerging market. The Clintons have a long and positive history with India and are well-liked in the region. As such, Hillary stands a good chance of strengthening ties with Indian Prime Minister Narendra Modi and creating a vibrant business environment for mutual trade and investment.

The threat of an Elizabeth Warren presidency

The other logical frontrunner in the Democratic race is Massachusetts Sen. Elizabeth Warren. While Warren has so far rejected speculation that she will run for the White House, she still has several months to change her mind, and would be a formidable opponent for Clinton.

A respected academic and a firebrand politician who has made a name for herself by attacking the excesses of Wall Street, Warren is a liberal darling, and it’s not a stretch to assume that she could win the White House on the wave of populist sentiment in the country.

The problem is that a Warren victory, whatever its merits, could be bad news for the business community, particularly Wall Street. While Warren’s achievements, such as with consumer protection, are laudable, it’s unclear whether she would be able to strike a workable balance between protecting the interests of average Americans and the needs of the business community in an increasingly competitive global marketplace. This includes business regulations and tax policies that can be excessively onerous or punitive.

Another danger with Warren is that her aggressive style and rhetoric could further divide Washington, leading to a continuation of the gridlock that has plagued the U.S. government for the last five years. Finally, like most of her Republican counterparts, she lacks foreign policy experience critical for the next President to have.

Wall Street may prefer a Republican in the White House but it needs to read between the lines of the current political landscape and place its bet strategically. Hillary Clinton isn’t perfect but is still the best choice to protect America’s economic interests.

On that front, at least, Wall Street and the nation’s interests are perfectly aligned.