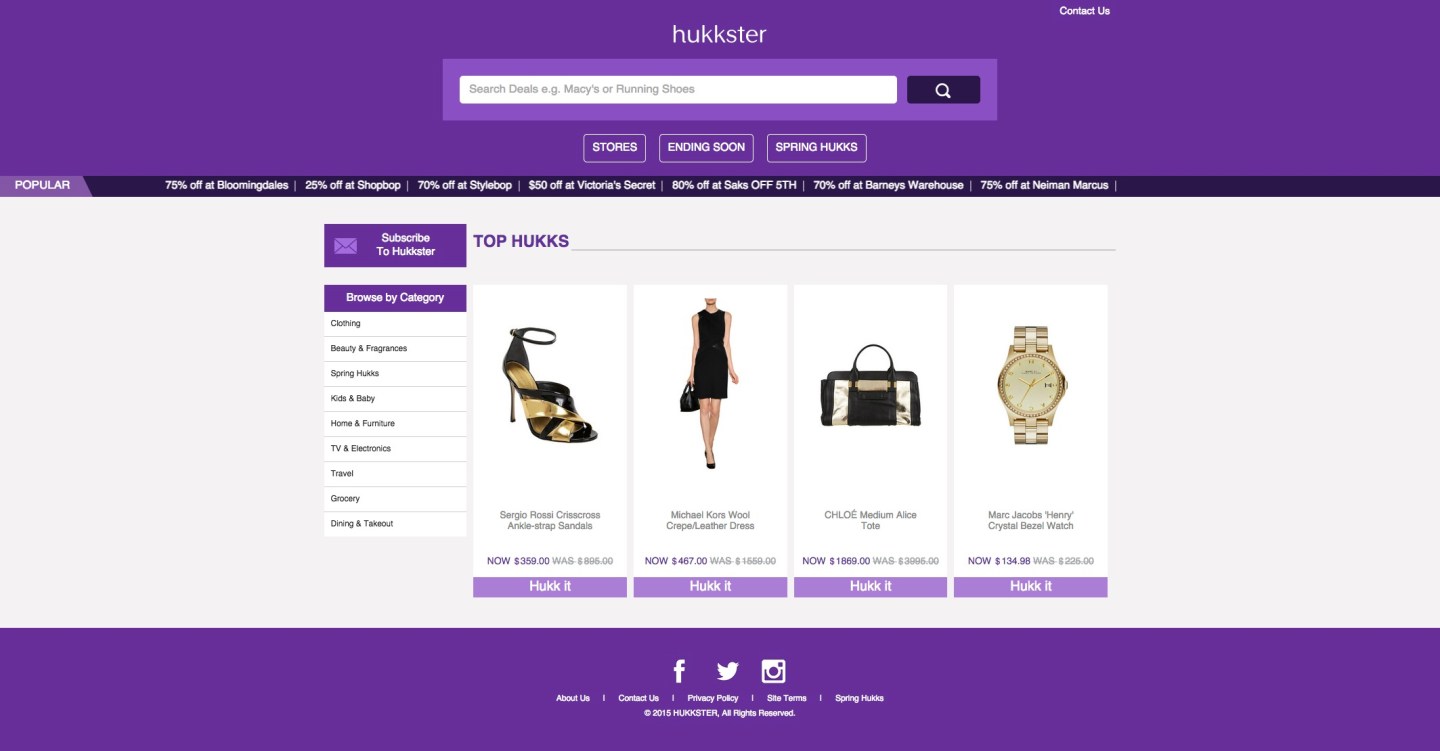 Mourn no more, deal-chasers, because Hukkster has risen from the dead. If you missed the defunct shopping website’s savvy sales alerts, you can turn that frown upside down. The new site just came back online today and — no shocker here — its new management promises its better than before.

With Hukkster’s founders, former J. Crew merchandisers Erica Bell and Katie Finnegan, out of the picture, the revived site is now run by eRetail Media. The biggest difference between the old site and the new is that it will surface items that are currently on sale, not when they go on sale in the future, Todd Foot, Hukkster’s new content manager, told Fashionista. Hmm, tracking future sales was pretty much the whole point of the earlier Hukkster, so this somewhat dull pivot might not be music to former users’ ears.

In addition to aggregating discounted goods, the site will also inform users about exclusive deals, promo codes and free shipping.

The original, famously Winklevoss twin-backed Hukkster shut down suddenly last August. The final message on its website, posted on Aug. 1 like a digital gravestone epitaph, declared, “Now time for a nap.” It also listed several key stats about the startup, including the fact that it lasted 822 days in all.

The New York City-based sale-alert startup, which allowed people to “hukk” products from apparel retailers like Bloomingdales and Nordstrom, notified its 300,000 users about its abrupt closure via email. Once a product was “hukked,” Hukkster would monitor its price until it dropped by 25 percent. Once it did, the “hukkster” was notified via text, email or push notification.

While the new Hukkster, dubbed Hukkster 2.0, doesn’t bring the cool, convenient price-tracking feature back from the dead unfortunately, it will initially post popular fashion and beauty product deals from several ecommerce sites in real-time, about 100 per day. Deals from additional shopping categories, like groceries, home goods, furniture, electronics, dining, travel and even takeout are on the way, as well, a representative from the new Hukkster told Entrepreneur.

An in-house team of 10 real, human bargain hunters “that lives and breathes discounts” is dedicated to scouring the web for deals “around-the-clock,” the representative said, though some conventional sales tracking technology will also be leveraged.

Hukkster 1.0, launched in January 2012 and monetized via referral fees from 315 retail partners, had raised $4.5 million from a stable of leading tech investors. The ride didn’t last for long, with the startup filing for Chapter 7 just two years later. The reason given: Failure to clinch a promising acquisition.

“We closed Hukkster because we were not able to close on an acquisition or financing in the time needed and thus we had to make the difficult decision to wind the company down in an orderly fashion,” Bell and Finnegan told BuzzFeed.

The company’s assets went up for sale, its domain name, customer database, backend code, iOS app and trademarked Hukkster and “Hukk” lingo included. Online wholesale website Jet. com, where Finnegan now works full-time, scooped up Hukkster’s assets last January for $65,000 and then sold a portion of them to eRetail Media, according to Fashionista.

eRetail tapped its freshly purchased Hukkster customer database today to tip former users off to the reincarnated site in an email that listed four major retailers at the bottom (Barneys New York, Bloomingdales, Macy’s (M), and Forever 21), but will they take the bait? Hukk it, we’ll have to wait and see.

The Top 5 Ecommerce Trends You Should Look Out For

How to Grow Your Daily Deal Site Customer Base

7 Tips for Preventing a Business Meltdown