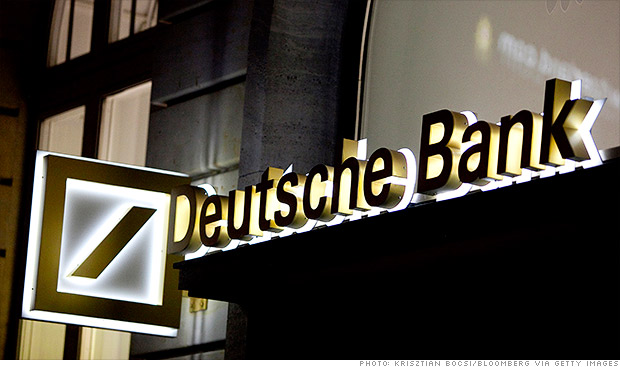 Germany’s largest bank is nearing an agreement that would result in the largest fine yet in a multi-year government investigation into whether financial institutions manipulated interest rates.

Deutsche Bank (DB) is reportedly close to a deal with multiple federal regulators that would see the bank paying a record penalty of more than $1.5 billion while also entering a guilty plea on behalf of one of its U.K. units, according to The New York Times, which cited anonymous sources.

“We continue to work with the authorities that are reviewing interbank offered rates matters,” Deutsche Bank said in a statement.

The settlement, which NYT said could come as soon as next month, would be the latest involving claims that a major bank engaged in a scheme to fix benchmark rates such as the London interbank offered rate, known as Libor. Deutsche Bank’s fine is expected to top the $1.5 billion paid by UBS three years ago to settle regulators’ interest rate manipulation claims in the U.S. and overseas.

Barclays (BCS) was the first bank to reach a Libor settlement, back in 2012, with the U.K. bank paying $450 million. In 2013, Deutsche Bank was one of several large banks to reach a settlement with the European Commission — along with Citigroup (C), JPMorgan Chase (JPM) and others — related to rate-fixing, but the German bank has yet to resolve similar investigations by U.S. regulators.