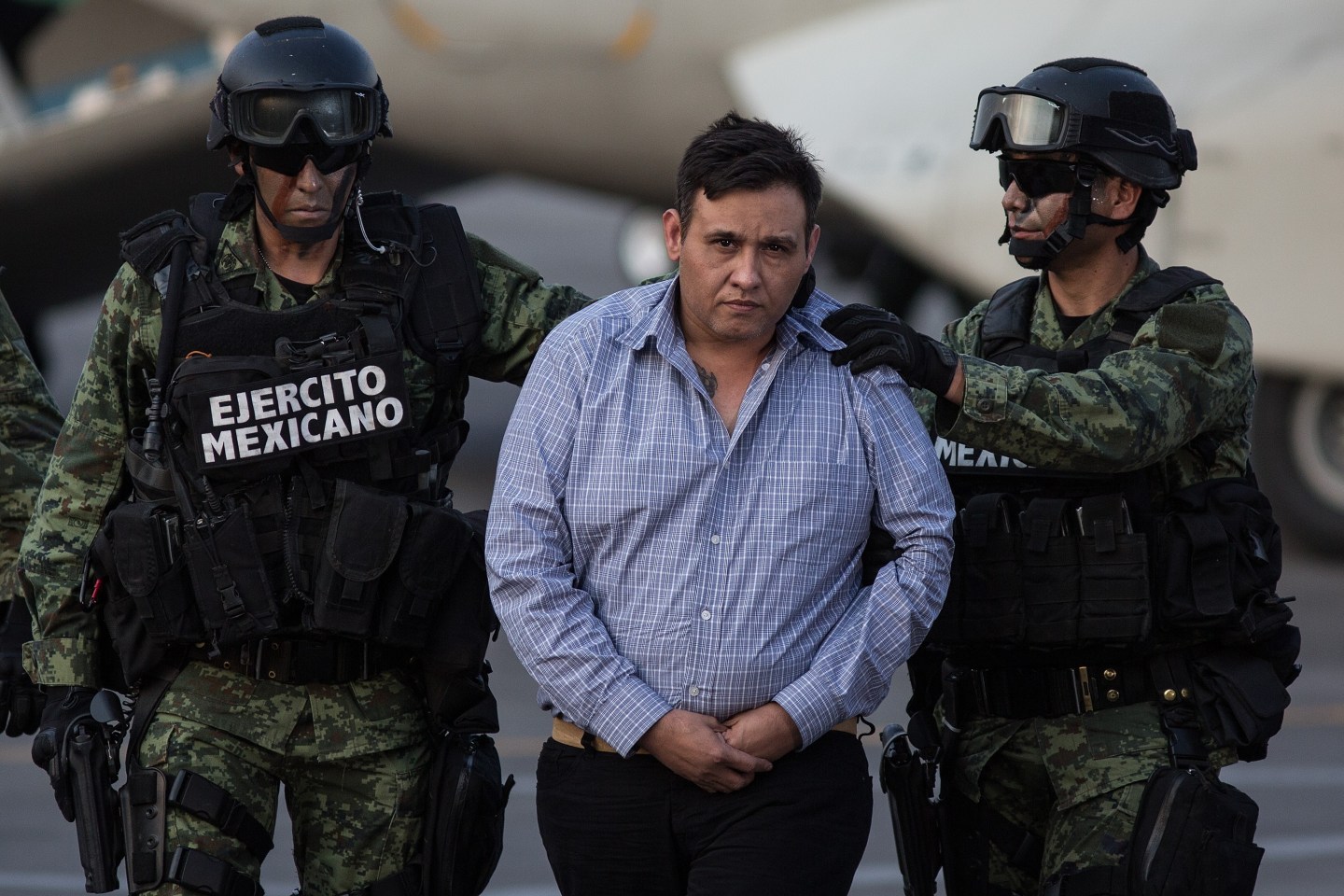 In the midst of this seething mountain capital, Mexico’s security ministry houses a bizarre museum — a collection of what the army seizes from drug traffickers. The Museo de Enervantes, often referred to as the Narco Museum, has drug samples themselves (including the rare black cocaine), diamond-studded guns, gold-coated cell phones, rocket-propelled grenades and medals that cartels award their most productive smugglers. It also shows off the narcos’ ingenuity for getting their drugs into the United States, including “trap cars” with secret compartments, catapults to hurl packages over the border fence and even false buttocks, to hide drugs in.

Agents on the 2,000 mile-U.S. border have wrestled with these smuggling techniques for decades, seemingly unable to stop the northward flow of drugs and southward flow of dollars and guns. But the amount of one drug — marijuana — seems to have finally fallen. U.S. Border Patrol has been seizing steadily smaller quantities of the drug, from 2.5 million pounds in 2011 to 1.9 million pounds in 2014. Mexico’s army has noted an even steeper decline, confiscating 664 tons of cannabis in 2014, a drop of 32% compared to year before.

This fall appears to have little to do with law enforcement, however, and all to do with the wave of U.S. marijuana legalization. The votes by Colorado and Washington State to legalize marijuana in 2012, followed by Alaska, Oregon and D.C. last year have created a budding industry. U.S. growers produce gourmet products with exotic names such as White Widow, Golden Goat and Oaktown Crippler as opposed to the bog-standard Mexican “mota.” American dispensaries even label their drugs, showing how strong they are, measured in THC (tetrahydrocannabinol, the main psychoactive ingredient), and grade their mix of sativa, which gets people stoned in a psychedelic way and indica, which has a more knock-out effect.

Drug policy reformists tout this market shift from Mexican gangsters to American licensed growers as a reason to spread legalization. “It is no surprise to me that marijuana consumers choose to buy their product from a legal tax-paying business as opposed to a black market product that is not tested or regulated,” says Tom Angell, chairman of Marijuana Majority. “When you go to a legal store, you know what you are getting, and that is not going to be contaminated.” A group called Marijuana Doctors elaborate the point in this comical online ad.

Analysts are still trying to work out the long-term effect this shift will have on Mexican cartel finances and violence. The legal marijuana industry could be the fastest growing sector of the U.S. economy. It grew 74% in 2014 to $2.7 billion, according to the ArcView group, a cannabis investment and research firm. This includes revenue from both recreational drug stores and from medical marijuana, which has been legalized in 23 states. The group predicts the industry will top $4 billion by 2016.

Other factors may have caused this fall in killings, says Alejandro Hope, a security analyst and former officer of Mexico’s federal intelligence agency. “Finances from marijuana could be having an impact on violence but you also have to look at other causes. Many of the most violent cartel commanders have been killed or arrested,” Hope says. These downed warlords include the head of the Zetas cartel Heriberto Lazcano, a former soldier who was known as the Executioner for the mass graves he dug. Mexican marines say they shot Lazcano dead in 2012, although his cohorts bust into the funeral home and stole his corpse.

Despite the drop in homicides, Mexico’s violence is still at painful levels. In September, cartel thugs working with corrupt police attacked a group of students, killing three and abducting 43. The atrocity caused hundreds of thousands to take to the streets to protest corruption and bloodshed. On Monday, cartel gunmen ambushed police in Jalisco state, killing 15 in one of the worst attacks on security forces in recent years.

A key problem is that cartels have diversified to a portfolio of other crimes, from sex trafficking to stealing crude oil from Mexican pipelines. They also make billions smuggling hard drugs. Seizures of both heroin and crystal meth on the U.S.-Mexico border have gone up as those of marijuana have sunk, according to U.S. Homeland Security, with agents nabbing a record 34,840 pounds of meth in 2014.

In total, Americans spend about $100 billion on illegal drugs every year, according to a White House report. The estimate puts marijuana at about 40% of this, so the legal industry still only accounts for a fraction of the total. One restriction to growth is that U.S. federal law still prohibits cannabis, making banking difficult and scaring investors.

In the long term, drug policy reformers hope for a legal marijuana market in the entire region. This would throw up the possibility of Mexicans legally producing and exporting their drugs to the U.S., taking advantage of cheaper labor. “Cannabis is not unlike wine,” says Sanho Tree, director of the Drug Policy Project at Washington’s Institute of Policy Studies. “I can buy a $200 bottle of wine, if that is what I am after. But many people will prefer the cheaper mass market product.” One advocate is former Mexican President Vicente Fox, who has voiced support for an American entrepreneur who wants to import marijuana to the United States.

Any such cross-border market would require a change of U.N. treaties, which outlaw marijuana. These come up for discussion in a General Assembly Special Session on Drugs in April 2016. “I feel optimistic there will be change. This movement has momentum,” Angell of Marijuana Majority says. “It is interesting that the United States was historically a driver of drug prohibition. Now parts of the U.S. are leading the change.”