How New York City got its first Denny’s 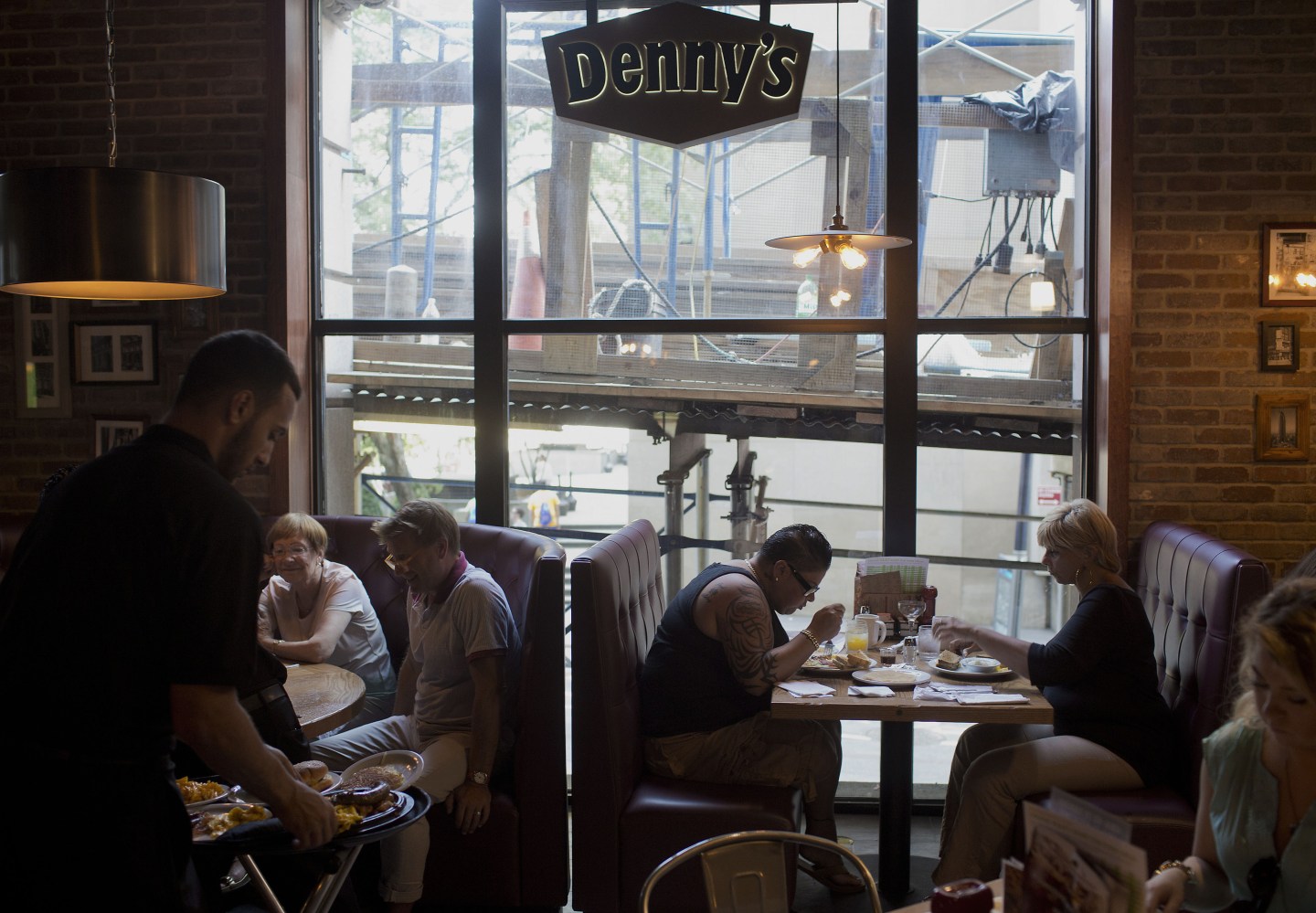 Customers dine at the Denny's Corp. restaurant in New York, U.S., on Saturday, Sept. 6, 2014. Denny's Corp., the restaurant chain known for dishes such as the Grand Slam and Moons Over My Hammy, is opening its first diner in New York City. The diner will offer a full bar with Prosecco on tap and a $300 brunch for two that includes a bottle of Dom Perignon champagne. Photographer: Victor J. Blue/Bloomberg via Getty Images
Photograph by Victor J. Blue — Bloomberg via Getty Images

Denny’s is as American as apple pie—except in the Big Apple. Until recently, New York was one of a handful of U.S. cities that didn’t have at least one branch of the diner.

That changed when Los Angeles-based Rahul Marwah—who is, along with his parents and sister, one of the chain’s largest multi-unit franchisees—learned about the gap in the New York market while at a company convention.

“When I heard there were no Denny’s in NYC, my ears perked up,” he remembers. “That didn’t make sense at all. In L.A., we had hundreds of restaurants. During a break, I talked to my family and told them the wheels were turning. I pulled aside the vice president of franchise development and said I wanted to go after New York City.”

Marwah got the nod, and over the next year, he spent time in New York, learning about the various neighborhoods and searching for the perfect location. The result was a Denny’s unlike any other, which opened last August in Manhattan on the edge of the Financial District.

The new restaurant is on the ground floor of an upscale condo building at 150 Nassau St. and is decorated with leather booths, distressed-wood flooring, copper-stamped ceilings and photos of the city throughout. And, most impressive, it has a granite-topped bar with a custom-designed cocktail menu.

We sat down with Rahul to find out if Denny’s can make it here, after making it everywhere.

It was kind of a strategic move. We wanted to stake our claim in the city itself. One of the reasons New York City was attractive to me as an operator was because of the population density. It’s not nearly as high in the outer boroughs or Long Island. The place we found was perfect—it’s right across from Pace University, near the base of the Brooklyn Bridge and near one of the busiest train stations in Manhattan. So we have lots of students, tourists and commuters. And we got 5,000 square feet at a reasonable rate.

New York is famous for its delis and cafes. Did residents know about Denny’s?

Residents sued to keep Denny’s out. How is the relationship now?

For them, it was largely the fear of the unknown. They think of Denny’s from college and road trips or going there at 2 or 3 in the morning after drinking. This location is not like that. We close at midnight. There’s not much bar traffic in our neighborhood. We now have a good, open relationship with the condo board. A lot of young families and people who live and work in the neighborhood come to our location.

As we were crafting the cocktail menu, we sat down with our supplier. He had mocked up a menu with this Grand Cru Slam on it, which is two Grand Slams, a bottle of 2004 Dom Pérignon and a high-five from the bartender. It was a joke, but I loved it, and we put in on the menu. I never thought anyone would order it, but we were going to keep a bottle of champagne around just in case. Then, before we opened, the press picked up on it, and my bar manager called and said, “I think we need to order a case.” Good thing we did, because we sold one or two per day during our first week. Now we sell about one per week. I saw a hipster couple order it who probably thought it was ironic. Then there were five or six guys who went in on it because they thought it was funny. I know a guy who ordered it with his fiancée just because they wanted a nice bottle of champagne!